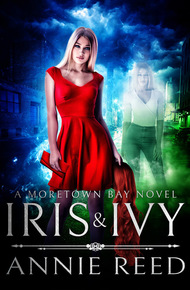 A prolific, versatile, and award-winning writer, Annie Reed's written more short fiction than she can count. She's a frequent contributor to Fiction River, Pulphouse Fiction Magazine, and Mystery, Crime and Mayhem. Her stories appear regularly on Tangent Online's recommended reading lists, and "The Color of Guilt," originally published in Fiction River: Hidden in Crime, was selected as one of The Best Crime and Mystery Stories 2016 (another one of her stories, "The Flower of the Tabernacle," also received an Honorable Mention). She's even had one of her holiday stories selected for inclusion in study materials for Japanese college entrance exams. Her Unexpected series of short-story collections showcase some of the best of her work.

Annie's a founding member and contributor to the innovative Uncollected Anthology series of themed urban and contemporary fantasy anthologies. She writes mystery, science fiction, and fantasy novels under her own name and suspense novels as Kris Sparks. She also writes sweet romance under the name Liz McKnight. She can be found on the web at https://anniereed.wordpress.com/

How far will one woman go to catch a killer?

Iris finds her quiet life torn apart after the murder of her identical twin. Ivy's ghost can't rest until her killer's brought to justice, only there's one big problem.

The killer's a changeling, a magical creature who can switch appearances like normal people change clothes. Changelings steal identities and take over lives. They pass unnoticed in a city like Moretown Bay. Their very nature lets them commit murder and get away with it.

Well, not this time. To help Ivy's ghost find peace, Iris becomes the bait in a deadly game to draw out a killer who can look like anyone. A killer who got a taste of blood and decided he liked it.

A killer who won't hesitate to murder the same woman all over again. After all, practice makes perfect.

Award-winning author Annie Reed is in so many volumes of Fiction River we've lost count. Every editor we have has chosen her stories for at least one of their volumes. She's that good. And Iris & Ivy is a fantastic example of her writing skills. Leave it to Annie to put a heart-wrenching twist on the classic ghost story. And the only way to read this book at the moment is through this StoryBundle! – Allyson Longueira

Ivy took a long drag on her cigarette and looked up at the sky. She couldn't see many stars—still too early in the evening for that—but someone had shot off a huge sparkler spell that cast a glittery rainbow across the twilight sky to the south. Probably over the stadium. The hometown baseball team must be winning.

The comment came from a man standing next to her. Ivy hadn't really noticed him before—people came and went and jostled each other in the crowd; that was nightlife down in the Bayside District—but she turned her head to look at him now.

He was about her height—well, her height in her five-inch heels—and maybe a few years older than her twenty-eight. Dark hair, dark eyes, and the kind of square jaw the heroes in all the superhero movies sported. He was dressed conservative casual, not hipster funk, and had a classic office-guy haircut. Overall it was a look that said, "You can trust me. I'm a good guy."

He was also a changeling. Ivy got a definite ping from him.

Not that it made him a bad guy. It just meant he'd put on this appearance on purpose like other people put on their clothes. He—or she—had probably bumped into someone who looked like this, and he—or she—had liked the look. Changelings couldn't turn into people they hadn't touched, otherwise the changelings Ivy knew at work would all look like the hottest/prettiest/hunkiest movie star of the moment.

Not that that would be a bad thing. Ivy wouldn't mind sitting in a cubicle next to someone who looked like Chris Hemsworth or Tom Hiddleston. Or Gal Gadot, for that matter.

The question was a good way of letting a changeling know you'd spotted them. Iris had told her that a long time ago, and Iris should know. Her job was all about spotting changelings who weren't good guys. Or good girls.

"Just Brad," the changeling said with a grin. "And I don't think I have to ask."

"Nice to meet you, Ivy, although I don't think there's anything 'plain' about you."

His skin was pleasantly smooth and dry when they shook, and Ivy felt herself relaxing into his bald-faced attempt to flirt. Her head still felt wonky, but it didn't seem to matter quite so much. Just a nice, pleasant buzz to get her in the mood to flirt back.

They talked about nothing much at all while Ivy finished her cigarette. When she was done, she headed over to a receptacle near the curb to crush out the butt, but she stepped wrong on a cobblestone. She would have fallen if Brad hadn't caught her elbow.

"Son of a—" She stopped herself before she could finish the curse. Some magical people took offense at swearing, and Brad seemed like the kind who might since he'd put on such a conservative appearance and all.

"I've never understood how women can wear shoes like that," he said. "I've tried it a few times, and I almost killed myself." He kept hold of her elbow while she tried to put weight on her foot. "You okay?"

She wasn't. She'd managed to twist her ankle. While it wasn't exactly throbbing, any more dancing tonight was definitely out of the question.

While cars weren't allowed on the cobblestone streets in the heart of the Bayside District, cabs and car services like Uber and Lyft were allowed in certain well-marked areas. The better for drunks to get home without injuring themselves or anyone else by getting behind the wheel.

She dug in her purse and pulled out her cell phone. But when she turned it on, she couldn't seem to concentrate enough to pull up the car service app. That fuzzy, wonky-headed feeling had come back with a vengeance.

He took the phone from her and swiped a finger across the screen. Just then a large, burly man—clearly someone who'd had way too much to drink—bumped into Brad and knocked Ivy's cell phone from his hand.

The cell fell face down on the cobblestones. Ivy didn't have to look to know it was broken.

"Oh, god. I'm so sorry!" Brad looked devastated. He bent down and picked up her phone, and yes, the screen had cracked into about a million pieces.

"I don't suppose you feel like using your phone to call a car for me?" she asked.

He shook his head. "I don't carry my phone with me. Too many of them get stolen down here. From what I hear, anyway. Besides, I drive myself, and I never have more than one drink so I'm okay to drive. I just leave my phone in my car."

His face lit up, and she knew what was coming.

"Why don't you let me give you a lift home? Or at least come back with me to my car, and I can use my phone to call a service for you if you don't want me to know where you live. We did just meet, after all."

Ivy started to shake her head. She could just hobble back inside the pub and have one of her friends do the same thing.

"It's the least I can do," Brad said. "I did drop your phone, after all. And my car's not that far away. I got lucky, got a spot in that lot next to Gilroy's."

Gilroy's was half a block away on the outer edge of the streets that had been blocked off to traffic. It had decent bar food, semi-decent beer on tap, and a hole-in-the-wall parking lot that charged exorbitant prices because it was prime real estate in the Bayside District.

It was also a well-lit parking lot complete with security cameras. Gilroy's didn't want to lose their clientele to thieves who made a habit of breaking into parked cars.

Nothing was going to happen to her if she went with Brad so that he could call her a car to take her home. The closest pickup spot wasn't that far from Gilroy's either.

She tried putting weight on her ankle again, and this time it didn't feel quite so bad. She was pretty sure she could walk to Brad's car and then make it back to the pickup spot. He might even let her text her friends so she could tell them know what had happened.

Although they'd probably just think she found some guy to go home with. If they were still sober enough to wonder where she went at all, which was doubtful. As much as Ivy liked to dance, that's how much her friends liked to drink, and Friday nights were their time to blow off steam. That's why they always used a car service whenever they went out to the Bayside District. Iris would be surprised to learn that Ivy was the sober sister of the group.

He held on to her elbow for the first few steps until she quit limping so much, then he let go and just walked next to her. A real gentleman. She wouldn't let him take her home—they didn't know each other well enough for that—but she might give him her number. Her broken cell, now safely in her purse, was insured, so she'd be getting a new one soon enough. It might be fun to go on a date with him and see if he was always this nice.

"Here we are," he said when they got to the parking lot. "It's the little black car in the back."

Little black car. Funny. Guys usually told you the make and model of their cars. Maybe Brad hadn't always been a guy. Changelings didn't care that much about gender, at least not the changelings Ivy knew.

Maybe Ivy wouldn't give him her number after all. She didn't have anything against changelings swapping genders back and forth, but she wasn't all that adventurous in her own love life.

Brad opened the car door with a fob he took out of his pocket. The car chirped in response, and the sound spiked through Ivy's head like an iron nail.

The world swam around her in a dizzying array of lights and music and the cloying scent of gardenias. Ivy put her hands on the car's roof to steady herself, but the car seemed to swallow her whole.