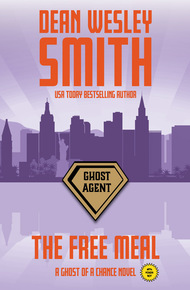 But as two new members join the Ghost of a Chance team, both ghosts and superheroes face a challenge that threatens to end the world.

The Ghost Agents, including newly dead recruit Elliot and almost dead Deanna, team up with Poker Boy and his team to save the living.

The Free Meal is part of USA Today bestselling author Dean Wesley Smith's Ghost of a Chance series. It overlaps with his fan-favorite Poker Boy Universe, but this series is definitely darker. And in The Free Meal, the newest Ghost Agents not only have to figure out how to adjust to their new life as ghosts, but they must also face a deadly, old magic that threatens to end the world. – Allyson Longueira

THE WIND HITTING his face around his goggles felt wonderful as Elliot West fell away from the drop plane just over sixty seconds before he was going to die.

The day around him was a perfect spring afternoon. From ten thousand feet, he could see hundreds of miles in all directions over the vast Treasure Valley in Idaho. All the spring colors of the patchwork farmlands shown in bright shades of brown and greens.

The clear air seemed to give everything a touch of vividness, a sharpness of detail that just couldn't be imagined by anyone standing on the ground.

Bogus Basin Ski Area above Boise looked almost small from this height, with the snow still clinging to some of the ridgelines. He could see beyond Shaffer Butte into the towering peaks of the central Idaho Mountains, still mostly covered in pure white.

Below him and to the right was the wide gray ribbon of Interstate 80 that came out of the sprawling city and ran to the east toward the desert town of Mountain Home and to the west toward Oregon. Tiny dots of cars seemed to just creep along.

The Snake River twisted to his left, high from spring runoff, and he could even see from his position where the Boise River joined into the Snake River, something in all his jumps he had never noticed before.

Every time up here he noticed something new, felt something different, experienced a new high. Deanna, his girlfriend, called him a flat-out adrenaline junkie and at the moment he couldn't have argued with her.

The sound of the wind increased as he picked up speed, holding in stable position for a moment.

Then he did a slow roll to look back up at the drop plane as two more jumpers cleared the back. One was his friend and law partner, Craig Daniels, and the other a newer member of the jump team named Ben.

Beyond the plane, white clouds drifted against a deep blue sky, framing the plane and the other jumpers perfectly. That would have been a beautiful picture if he had his camera with him.

This was just a free jump with all of the jumpers on their own, so since he was the first out, they needed to watch out for him. He didn't need to worry about them at all.

On the next jump they would practice for some of the stunts they were going to do for the upcoming air show in eastern Idaho next weekend.

Elliot let himself drift back into stable position, just relaxing, the wind around him a familiar feeling, the silence wonderful. He treasured the time he could get away from the pressures of defending people in courts. He loved the job, but this simple act of falling kept him grounded more than anything else.

Sometimes, in the winter, snow skiing gave him this same feeling, especially standing on the top of the lift, alone, just before they were to turn off the lights in night skiing. That isolation also helped him get clear and focused on the work.

And in the late spring and into the depths of summer, he loved spending time rafting the really rough rapids of the Idaho and Oregon rivers. That felt like more pure adrenaline, except for those calm, lazy times in the warm sun between rapids.

And all of it charged him.

On beautiful spring evenings like today, it just didn't get any better.

He rolled back over to see Deanna and Steve get out of the plane next. He and Deanna Teel had been dating for years now. But at thirty, he didn't feel the need to get married just yet. He and Deanna were happy with what they had. She had been a year behind him out of law school, and they had actually met while clerking for the same judge.

He had to admit, he loved her more than he could have ever imagined loving another person. They had a wonderful life together and she managed her corporate law practice with the ease and sure hand of someone far beyond her twenty-eight years. They called her one of the best corporate attorneys in the northwest.

And his reputation as a defense attorney was climbing as well, mostly because he took the fearlessness from the sports into the courtroom to save his clients.

All his and Deanna's free time away from their jobs they spent either skiing together or doing other sports or reading, sometimes far, far too late into the night when they both had to be up early the next day.

They both had a passion for reading and often shared novels they loved and often argued throughout a day about the meaning of something in a novel. Elliot found it great fun.

People said they seemed to match with their dark brown hair and dark eyes. He couldn't imagine being with anyone else, but they had made no permanent plans yet to stay together. They just both seemed to know that they would.

As Deanna had said one night a few months ago when the topic of a future came up, "Let's just not rock the boat. There will be time."

Elliot let himself just relax into the wind and drift with the wonderful view of the patchwork farmland below him. He could just feel the stress of the day's case easing away.

He let the moment last as long as he could, then checked his altimeter. Three thousand feet. He had a little time yet. He normally pulled at just under two thousand.

So with one more look around and a final roll to make sure no one was being stupid and was right above him, he flashed past two thousand feet and pulled his ripcord.

The familiar thump of the pilot chute releasing was fine, but then nothing.

He twisted around quickly to see that his chute had not deployed in the slightest. Even with the pilot chute doing its best to yank his main wing from his pack, nothing was happening.

He did a quick by-feel check of the snaps that held the chute in his pack, trying to pry them loose.

Nothing. He could get no leverage on them at all reaching around like that.

Damn it all to hell. He hated landing with his reserve. Just annoying.

He glanced at his altimeter. He was far too low. He should cut loose of his main and go to the reserve, but he flat didn't have the time. Besides, he didn't want to lose it in a swollen creek below.

He shifted position so that he was falling almost backwards and snapped his reserve out of the pack on his stomach.

It deployed perfectly, but then caught in the pilot chute for his main and yanked his main out as well.

The two chutes tangled in what was called a streamer before he even had a chance to stop them or cut one loose.

When one chute went into a streamer, it meant that the chute was tangled and the weight of the falling body was pulling the chute along toward the ground like a string flapping in a high wind.

When both chutes tangled together in a streamer, Elliot knew he was finished.

Damn it all to hell.

He studied his chutes, looking for any hope at all.

He had nothing to even help him start to untangle them even if he had the time.

His speed had barely decreased.

He had seconds to live.

Not staring at the ground rushing up at him, he fought to the last second to untangle the chutes, cutting away his reserve in hopes it would flash free and let his main catch air.

It just went up and tangled with his main even worse.

Today was not a lucky day.

Both chutes were tangled far, far too much to ever hope to be free.

"Damn!" he shouted into the wind, his last word, as far above him he caught sight of the tiny figure of Deanna.

It seemed she had been wrong. They didn't have the time together he had hoped.