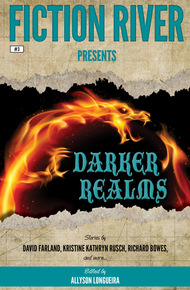 An award-winning writer, editor and designer, Allyson Longueira has worked in fiction and nonfiction in multiple media, including newspapers, magazines and books. She holds a BA in English from Rutgers University and an MA in design and editing from the prestigious University of Missouri School of Journalism. As editor, she led her newspaper to three general excellence awards in three consecutive years from the Society of Professional Journalism and the Oregon Newspaper Publishers Association. She has taught writing and design at the college and professional levels, including a post as adjunct professor at the University of Oregon as well as teaching professional workshops and lectures through WMG Publishing. In 2016, Allyson launched Fiction River Presents, a new series of reprint anthologies, published bimonthly. She is also currently editing a volume in the original Fiction River line. She is the publisher of WMG Publishing, Inc., headquartered in Lincoln City, Oregon.

Take a journey into darker realms with the latest volume of Fiction River Presents. Starting with a one mage's difficult choice, this volume transports readers to dark magical worlds—sometimes eerily similar to our own and sometimes incredibly foreign. Including the prequels to two groundbreaking series, the Runelords and the Fey, this volume proves why Adventures Fantastic says the Fiction River series "is one of the best and most exciting publications in the field today."

The Fiction River volume that inspired this bundle. When WMG came up with the idea of Fiction River Presents, I started with a story that I couldn't stop thinking about and built an entire volume around that concept, in this case dark fantasy. That set the stage for the rest of this incredible volume of short fiction, which includes the prequels to two groundbreaking fantasy series: Kristine Kathryn Rusch's Fey series and David Farland's Runelords. – Allyson Longueira

I vividly remember one of my first forays into a darker realm. It was a short story by Stephen King called "The Eyes of the Dragon." I remember it in part because I was so surprised it was a King story (and thus the myth that an author sticks to one genre was shattered early).

Still, I didn't really become a fantasy reader until I discovered Terry Brooks' Shannara series. And even then, I only read Brooks. It would be many years until I would dive into vast unrecognizable worlds like Middle Earth, the Seven Kingdoms of Westeros, the Blue Isle…

But once you take that leap...you realize the number of worlds at your fingertips are endless. And, I mean, who doesn't love dragons.

Thus, I offer you this third volume of Fiction River Presents: Darker Realms.

When we conceived of this series, I knew high fantasy would comprise a volume. And I knew Thomas K. Carpenter's "Lost in a Tarnished Cube" would lead it off.

Tom starts us off on our journey by presenting a real-world problem in a magical realm. And he offers a solution that is as complex as it is creative.

We go from a mage's tower to another story of trapped souls, only this time the clever Louisa Swann puts a magical spin on hearing voices. And a compassionate take on exorcising demons, of a sort.

Next, Steven Mohan, Jr., gives us a different kind of demon to exorcise. Dragons, unicorns, mobsters, feds… Steven mixes the real world and old magic in unexpected and fascinating ways.

From there, Rob Vagle gives us our final taste of the real world before Thea Hutcheson returns us solidly to other realms. And the realms get darker….

Our next story in this volume marks a departure from our usual reprint story options. But I couldn't publish a high fantasy reprint volume without including the Fey.

"Destiny" by Kristine Kathryn Rusch gives critical backstory into one of the main characters in that rich and compelling world. The reason this story is unusual, however, is that it was not published in Fiction River…until now. But be warned, you'll be hooked into series you won't be able to put down.

Speaking of hooking you into a series, our next-to-last story is another prequel, this time for David Farland's New York Times bestselling series, the Runelords. "Barbarians" is a powerful tale set a thousand years before the rest of this epic series.

Our final foray into the darker realms is the darkest of our stories. Richard Bowes "The Witch's House" will punch you in the gut. It was featured in our first-ever volume, Unnatural Worlds, and I've never forgotten it.

Just like that long-ago Stephen King fantasy story, the best ones stick with you.

I hope you enjoy this volume. I certainly enjoyed putting it together.