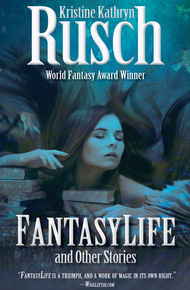 FantasyLife and Other Stories by Kristine Kathryn Rusch

When Lyssa Buckingham left her hometown of Anchor Bay, Oregon, she never planned to return. She thought she could escape her family's legacy. She thought wrong.

To help Lyssa's daughter, 10-year-old Emily, Lyssa must rejoin her family and come to terms with its magical heritage. Now Lyssa fears she and Emily might pay the greatest price of them all.

To quell the coming storm and save the lives of everyone in Seavy County, Lyssa must uncover the truth about her family's past—even if it changes her daughter's future forever.

FantasyLife and Other Stories pierces the thin veil between the magical world and the human one to reveal the darkness and sacrifice that holds them together. Also includes a special introduction by the author, as well as the Seavy County stories "The Women of Whale Rock," "Strange Creatures," and "The Light in Whale Cove."

I've wanted to get my hands on this book for a while, and World Fantasy Award winning author Kristine Kathryn Rusch let me put together this brand-new, author-preferred edition just in time for this StoryBundle. FantasyLife and Other Stories includes a special introduction by the author, three stories from her Whale Rock series, and the author's preferred version of FantasyLife. With mermaids, selkies, and other dark sea creatures of legend, Rusch creates a fantasy world so real it's hard to believe Seavy County doesn't actually exist. – Allyson Longueira

Ever since 2009, I have written a weekly nonfiction blog on my website, kriswrites.com. Most of those weekly posts discussed the changes in the publishing industry. The Kindle disrupted the industry in 2009, which was already suffering from some serious mismanagement and corporate consolidation in the late 1990s.

From the creative point of view, the biggest change in the industry is that our projects are our own again. In the past, we would start a series or write under a particular name, and those projects would be subject to the whims of traditional publishing. Sometimes the whims made sense; often they didn't.

The novel that provides the anchor for this volume of stories is a victim of several whims. In 2001, John Ordover, then a major editor at Pocket Books, wanted to start a fantasy imprint there that would get a lot of mainstream attention. He was going to publish the books he bought in hardcover and give them the kind of push that would get books on The New York Times bestseller list.

It's hard to remember back to those pre-9/11 days. Harry Potter had only been around for four years, and a lot of people in the industry thought the novels not only poorly written, but a blip that would disappear soon, rather than seeing the phenomenon they would become—for adults as well as kids.

Fantasy was not really in vogue, especially among the gatekeepers in the publishing industry. They didn't want to put a lot of money into the genre at all, which is laughable by 2018 standards.

So John's idea was cutting edge.

He wanted a novel from me to start the line. I pitched a project based on the Oregon Coast setting that I had written a few short stories about. John read the stories, liked them, and wanted something like them "but bigger." I came up with the novel that would become FantasyLife, along with a follow-up novel.

I got a fat two-book contract, and turned the book in early, then went on to other projects, planning to get to book two in six months or so.

A few months later, John talked to me. Pocket Books had gone through some changes at the corporate level, and John's fledgling imprint got tossed into the trash without publishing a single novel.

John turned in his resignation either just before or just after the book got published. (The details are foggy in my ancient memory.) Before he left, he did me a favor: he canceled the second book in the contract. I got to keep every dime I was paid (usually when a book is canceled, you have to repay the advance on that book), but I didn't have to write a second book that would be published dead.

So FantasyLife hung out there by itself, filled with promise, but not really fulfilled. There were other issues as well. Pocket Books screwed up the title. It's FantasyLife (one word) not Fantasy Life (two words). When you read the book, you'll understand the difference.

There were some other changes as well, which I have since fixed.

Fantasy Life (the book from Pocket) gave me other grief as well. I couldn't get Pocket to take the book out of print. Their edition, with all its errors, still exists in an ancient print-on-demand file, which they sell as a $26 trade paperback. For years, they sold the ebook edition for $20. I checked as I wrote this: it's now $15.99.

I found their mismanagement so discouraging that, as I finished other projects, I didn't really want to revisit the other books that I had planned in this world. If I wrote those books, I would end up boosting the Pocket Books edition, which is a bad deal for my fans because it forced them to buy an expensive inferior version of the book.

So I diligently worked over the years, getting my license back. I still can't get that stupid edition out of print, but I own the rights to omnibus editions and to other forms of the novel. I have licensed the audio rights and other rights, but I never found the time to put together an omnibus edition of the stories covered in the book and the novel itself.

Finally, Allyson Longueira of WMG Publishing scheduled FantasyLife into a promotion she was running, and that got me to take the time to put my author's preferred edition together. You now see the book with the right title and proper language usage.

Because this is an omnibus, it features the three short stories that precede the novel. You'll see Hamilton Denne change over time, meet Dan Retsler (who has moved on to other climes by the time this novel starts), and see one of the selkie problems mentioned in the novel.

I think your reading experience will be a lot richer once you've read the short stories and then read the novel.

I've written other pieces set in Seavy County, but no others set in Anchor Bay. I found my notes for the next book, and my brain is now toying with some of the things I left behind.

It's amazing to me how many stopped-up tributaries writing careers used to have in the bad old days of traditional-only publishing. I used to spend a lot of time apologizing for the fact that some corporate decision broke one of my series or destroyed one of my pen names.

Now, I spend a bit more time apologizing for my lack of time. Yes, there will be more stories in Anchor Bay. But if you want something to tide you over, take a look at my Seavy County stories and novels. There are a lot of them, all set in the same milieu as FantasyLife.

I do hope you enjoy this book. It was fun to revisit it as I restored pieces that had been excised for all the wrong reasons.

And if you happen to read this on a windy, rainy night, make sure that no water leaks into your house. You have no idea what might slip in with it….