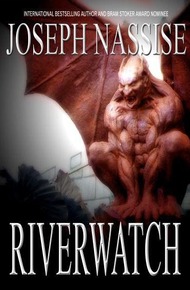 A forgotten chamber secreted beneath a river. An ancient evil that lies slumbering in the dark. A guardian determined to fulfill his duty to his last, dying breath.

As something dark and deadly takes to the skies over Harrington Falls, Jake Caruso and his friends, Sam Travers and Katelynn Riley, find themselves drawn into a primeval conflict set in motion centuries before.

When fresh blood is spilled and the death toll mounts, these three friends will find themselves faced with a terror beyond imagination, one that will require every vestige of their strength, faith, and determination to confront.

The notion came out of nowhere; seeping into his consciousness the way fog sweeps off the sea on a cool summer evening, insidiously sliding into the center of his thoughts. Once there, it stuck hard and fast. The stone did, indeed, resemble a gravestone. The outer edges had been beveled at a slight angle, giving it a simple yet unmistakable sense of dignity. It had also been sealed to the dirt floor with mortar.

If it was a tombstone, then whose was it?

Why put it here, hidden beneath a river?

It just didn’t make sense. Staring at it, Jake decided it had been a difficult afternoon. This latest addition to his troubles had started fifteen minutes ago, with Rick’s arrival in his trailer.

"We need you in the cellar, boss."

"What the hell for, Rick?" Jake Caruso replied without turning. "You know Blake wants these estimates finished before two o’clock. I don’t have time to look at every little thing that goes wrong. That’s why I appointed you foreman, remember?" Jake was tired; the work had been going well, but Blake was on his back about even the tiniest details. It was starting to get to him. Why can’t the man just back off and let me do my job? Jake wondered, not for the first time.

Rick’s reply surprised him. "I know boss, but I think you’d better come on down. It’s important."

His solemn tone was what caught Jake’s attention. Turning away from the work before him, Jake looked at Rick and started in surprise. His friend’s lips were pressed tightly together. The tension in his jaw was easy to see despite the man’s effort to hide it. His usually ruddy face had gone a sickly gray and the cheerful light in his eyes had dulled to a lusterless sheen.

Jake’s aggravation with the interruption immediately vanished. Rick was the perpetual optimist. For him to look this bad could only mean that something major had gone wrong. Images of bloodied flesh raced through Jake’s mind with visions of men crushed by powerful tools.

"What happened? Somebody hurt? Should I call an ambulance?" Jake asked, reaching for the phone.

Rick held up his hands in a placating gesture. "No need for that. Nobody’s been hurt. The crew in the basement found something I think you should look at, that’s all."

That was it. When pressed for more details, Rick refused to say anything more.

Tossing his pen aside and running a hand through his already disheveled hair, Jake agreed to go look.

The two men left the trailer and crossed the lawn to the wide veranda that encircled the house. Climbing the steps, they entered through the front door. Moving along the foyer, they passed through the dining room, the butler’s pantry, and then down the flight of servants’ stairs that led into the basement where Jake’s crew had been working for several days.

The home’s original owner had made use of the land’s natural features, routing a nearby stream directly through the cellar. The stream’s steady flow turned a large waterwheel, which in turn generated electricity for the estate. Ultimately, the owner’s eccentricity had caused more harm than good, for over the years the stream had back up and pooled in the building’s basement. Now it was nothing more than a deep stagnant pool.

Blake, the present owner, had decided that the cellar was to become a wine storing area. Jake’s men had dammed what was left of the stream out on the east side of the property earlier in the week and had spent the last two days pumping the last of the water out of the cellar. The streambed would be filled with concrete and a foundation laid for the hardwood floors, as Blake had requested.

As they descended the flight of rickety old steps, the smell of mildew and rot wafted up toward them. It reminded Jake of childhood days spent hunting crayfish in swampy creek beds. The stench in here was the same. At the base of the stairs he paused and surveyed the job his men had done. Bright lights had been erected to illuminate the area and in their harsh glare Jake judged the height the water had risen over the years by the dark stain left on the wall. Beneath this mark, layers of green slime and algae still hung, shimmering in the light. The air was heavy with dampness, making Jake feel as if he were walking through a vertical curtain of dew. He could see the wide trench that extended from one side of the house to the other, neatly bisecting it before disappearing out the opposite side.

Rick led him over to the edge and pointed down.