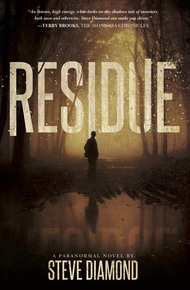 Steve Diamond is the author of the YA Supernatural Thriller, Residue. He is also the editor of the Horror anthology, Shared Nightmares. He writes for Baen, WordFire Press, Ragnarok, Privateer Press, Gallant Knight Games, and numerous small publications and game companies. In 2015 he was nominated for the Hugo Award for Best Short Story. He is the founder of the review site, Elitist Book Reviews (elitistbookreviews.com), which was nominated for the Hugo Award in 2013, 2014, and 2015.

Steve lives in Utah with his wife and two kids. He's an accountant for a Department of Defense contractor by day and takes care of all the writing at night. It's like being a superhero … but without the superpowers, fame, or broken bones.

Residue follows 17-year-old Jack Bishop after his father is abducted and a monster is let loose in his small town. As he looks for his father, he begins to notice that he can see the psychic residue left behind by monsters and murder victims. Along with the mind-reading Alexandra (Alex) Courtney, Jack uses his growing ESP abilities to stop the deaths in the town and find out why his father was taken.

Hugo Award-nominated author Steve Diamond gives us a YA supernatural thriller to add to this StoryBundle. This one will scare the hell out of you, but it's so much more than just scary... – Allyson Longueira

"Your father is missing," the deputy said. "We found his car abandoned several miles outside of town."

There are a few things I never expected to hear in my life. That was one of them. For a moment, I stared blankly at the man—his nametag read "Deputy Path"—and wondered if this was some sort of joke. A really bad one.

"Who put you up to this? This doesn't really feel like something my dad would put together. He doesn't have much of a sense of humor. Was it Barry? He can be an ass sometimes, but this seems a bit excessive. No? Well then who—"

"No one put me up to this, Jack," he interrupted. "There are a lot of worried people out searching for him, and if he's here, I need to know right now."

"This isn't a joke?" I rubbed my eyes, trying to clear the sleep from them. Then I shook my head in a vain effort to clear the cobwebs.

I'd been sleeping soundly on my living room couch, dreaming about who I would take to Homecoming. I was at the part of the dream where one girl had just said yes, and then two more lovely ladies came into the picture, fighting over who would be my second date to the dance. I offered to take them both, of course.

They'd been fawning over me when the pounding on the door ripped me from that moment of bliss.

"Look," I said with a weary sigh. "My dad left last night in response to a call about some security thing at Helix. I was waiting up for him, but I must have crashed on the couch. He's probably upstairs, sprawled out on his bed."

"Would you mind checking for me please?"

"Seriously?" I shook my head in annoyance. "Whatever, man. Take a seat. I'll only be a second."

Deputy Path nodded, face grave. Something in his expression made my heart beat faster. I glanced over my shoulder to the stairs leading up to the second floor of our home, then back at the Deputy. My mind finally caught up to the situation, and my stomach clenched.

I tried not to hurry up the stairs, reassuring myself as I climbed. My dad would be up there. I'd open the door to his room, and he'd be lying there, snoring like usual. Maybe he'd even still be in the clothes he'd worn last night.

Yeah. He'd come in the house quietly, and had seen me asleep on the couch. It made sense. He hadn't wanted to wake me.

But the deputy said his car was abandoned outside of town.

That stray thought floated through my mind as I reached the top of the stairs.

Now I was worried.

As I reached out a hand to turn the knob on my dad's door, I realized my hands shook.

With a deep breath I grabbed the handle and twisted, then pushed the door open.

The bed sat empty, made up, undisturbed. Clearly no one had slept there last night. I walked through the room to the adjoining bathroom and found it empty too.

Panic clenched in my gut.

Without really meaning to, my body doing its own thing, I ran out of the room, shouting, "Dad!"

I threw open every door on the second floor. Each and every room. Every stupid closet and bathroom. I even checked under the freaking beds.

Helplessness clutched at me. I couldn't do anything. There wasn't any magic pill or wand to make my dad come back right now. I screamed in frustration and threw a glass I didn't even realize I'd picked up. It shattered against the wall in the hallway, spraying glass everywhere.

Deputy Path pounded up the steps and burst into the hallway. "You okay, Jack? What's going on?"

My cell phone buzzed from inside my room at the top of the stairs. I sprinted for it. It was going to be my dad, apologizing for all the worry.

I grabbed my phone and slid my finger over the screen to unlock it. I had a text from my friend Barry.

Whatever. Barry could wait. He'd left me hanging more than once. After all, his dad wasn't missing or anything. I checked for missed calls and found five from Barry, but that was it. Nothing from my dad.

It took all my self-restraint to not hurl the phone at the wall like I had the glass.

"Talk me through it, Jack," Deputy Path said. His voice held that false calming tone all adults were pros at. "What exactly did your dad say last night?"

I took a few deep breaths and resisted the urge to sink to the floor. No. I wasn't going to embarrass myself in front of this moron.

"He got a call last night from someone at Helix," I said as calmly as I could manage. "He asked the person on the phone about casualties or something."

I closed my eyes trying to remember the words. It had all happened so fast. One minute we were eating root beer floats, and the next he was on the phone, tense like I'd never seen before.

"Then he said …" How had he put it? "He asked something like, 'What do you mean it was a rescue mission?'"

"Are you sure that's all he said?"

"Look," I said. "From the moment he got the call, to when he flew out the door was, like, three minutes. He said he'd be back later, and we'd have some things to 'discuss' when he got back. Whatever that meant."

I wanted to reach out and strangle him. Other than that? Nothing. "He left at almost eleven. I don't know what else you want me to say. You came to my house, remember? How about you tell me what the heck is going on?"

I shoved him. Probably not the smartest thing to do to a cop, but I was sick of his attitude. "Don't touch me," I said through clenched teeth. "And I'm not your son. Now how about you actually give me a little bit of information instead of being a tool?"

His eyes narrowed for just a second, but then he nodded in understanding. The change in expression, almost like he was a different person now, calmed me. I wasn't normally the combative type. This wasn't me. I was just so … so …

I was just so worried.

Was my dad okay? He had to be.

"Your dad called Helix last night and told them he was being followed. Then his phone cut out. We tracked the GPS on his cell and found his truck a few miles from Helix. He wasn't in it, so we wondered if he had come home. I'm sorry, Jack, and this is a terrible question to ask, but do you have any family around here that can come stay with you until your dad shows up?"

Oh man. This guy was dead serious. "I have an aunt in town. Martha Thompson."

I shook my head. "Do you need her number?"

"That won't be necessary, Jack."

"Any … any idea where my dad is?" It was a stupid question. The deputy wouldn't be here if he knew. But I had to ask anyway. The deputy shook his head. Of course not. Pity showed on his face and in his posture. I didn't want his pity. I wanted my dad.

"All the other deputies are getting together to organize a search. I was told Helix is already putting together their security people to look for your dad."

"Right now?" I asked. A search would at least give me something to do. I wasn't going to sit here like a kid who'd just been dumped.

"Well, it's going take a bit to get everyone together," He hesitated. "Though honestly it might be better if you waited here. You know, in case he comes home and—"

"Not gonna happen," I interrupted. Desperation snuck into my voice. I needed to be out there. I didn't know why, maybe I just needed something to do. I left Deputy Path sitting on my couch while I went back upstairs to change into some jeans and a light jacket.

The deputy held up his hands as I came back down. "Look, we need to wait to see if any more information comes in. How about we sit down for a second—"

"I am not going to sit down." My anger and helplessness got the better of me of me again. He took my shouting well, better than I would have expected. A flush of embarrassment crept into my cheeks, and I lowered my voice. "You can either drive me to where his truck is, or I'll drive myself." Never mind I had no idea where that might be, or what car I would take. I didn't have my own.