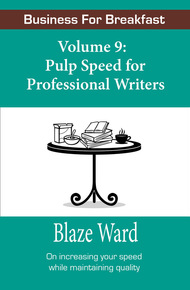 They've told you that writing fast is impossible. They were wrong.

You too can create stories at the speed of the great pulp writers. Not only that, but your craft will actually get better the faster you go. It just takes time and practice.

Come learn the things I discovered as I went from writing at mundane rates to Pulp Speed.

•Where did the term "Pulp Speed" come from?
•What are the classifications of Pulp Speed?
•How does your health and ergonomics impact your speed?
•What is possible?

Are you ready to break loose and start turning out good stories at amazing speeds? Do you have what it takes to go "All Ahead Crazy?"

What Is Pulp Speed?

We should start off by talking about this thing called Pulp Speed. This is another term for Really Freaking Fast. To understand the background, we need to go back to the era of the pulp writers, which is generally from the end of the First World War, give or take, up until perhaps the end of the Fifties. So about a long generation of time.

In those days, there were not a lot of books published in the field we know today as science fiction. The modern paperback novel, as we know it, came about after World War Two, as a result of all the books that the US Government printed for soldiers during the war. That taught an entire generation of men (and women) to read for pleasure.

Before that, what you had were the magazines. Things like Amazing Stories, Worlds of Wonder, The Black Mask, Weird Tales, etc. They came and went frequently, with a only few of them surviving long, and fewer have made it clear down even to the present. Each tended to lock into a particular genre, and then tried to generate enough newsstand sales to get a subscription base going that could keep the magazine solvent. It didn't always succeed.

For such magazines, they frequently paid a penny a word (US $) for stories in science fiction. Assuming a short story came in at 5,000 words, the story would earn the author $50. For comparison sake, the median US income in 1940 was $956, or roughly $80/month. Mind you, this is median, so just selling a single story in a month would get you a nice, lower-middle-class lifestyle. And if you sold two, you were living high on the hog.

Not every story would sell, but if you hit once or twice per month, you were set. The key was to write a lot of stories, and send them off. Every story we write is not Pulitzer material. And spending a whole month crafting such a story is no guarantee that it will be any better than one you wrote in an afternoon.

Furthermore, a lot of writers were submitting in those days, and some of them just weren't that good at their craft. The editors had their favorites, people they could rely on to produce good enough work, on theme, on a regular basis, so they could, it turn, fill a whole magazine. But you couldn't publish three stories by Bob Brown in the same magazine this month.

You could, however, publish three stories written by Bob Brown, and use pennames on two of them, so "Marc Jones" and "Stan Woods" could also have stories here.

What we had was an ecosystem that favored good writers who could produce good words at speed. They wrote a lot of words. Whole acres of them. Because they treated it like a job.

What does that mean?

These days, you generally go to work and are in an office or in front of a press for eight hours, with a break for lunch and smokes.

The Pulp writers sat down and typed for eight hours.

The new writer, just sitting down and figuring out her craft (and typing on a keyboard, rather than longhanding), will quickly get up to a pace of about 500 words per hour. However, she won't be able to write for eight hours straight.

Writing for that many hours is a skill, as well as a muscle. Treat your writing the same way you would train to run a marathon. Start slow and careful, and slowly push yourself to greater lengths and speeds, rather than trying to do it all at once.

So let's say Suzy writes for a couple of hours, and produces 1,000 words. Then she takes the rest of the week off, but comes back and does it again the next week.

WARNING: LOTS OF MATH AHEAD. PROCEED AT YOUR OWN PERIL.

Let's assume she takes off a week in the winter for vacation, and another week in the summer, like most people tend to do. At the end of one year, Suzi has written 50,000 words.

Let's repeat that, for the people just skimming right now because of the math warning.

That's a novel. Depending on who you ask for a technical definition, a novel can be as short as 30,000 words. Hugo awards consider a novel to be anything above 40,000 words. 50,000 is a nice step above that.

And all she has put in are a couple of hours a week to write a novel.

So now let's step the math up a little more.

Let's say she writes for an hour every day, five days per week (let's play on the weekends). And we'll take two weeks off every year for vacation. Now Suzy is writing 5,000 words per week.

Now let's go back to the pulp magazines.

These guys (and they were largely men, with some amazing women who had to use male pennames to get published) were writing for up to eight hours per day. So let's call it a sustained 8,000 words per day. Five days per week. Two weeks off.

And a number of folks were doing that. Maybe not to that pace, but they were writing a lot of words.

It came to be known as Pulp Speed. Or writing at the speed of the Pulp Writers. For us, today, the term is measured as something of a slacker's pace. Only ONE MILLION WORDS in a year. Because, you know, us moderns are pipsqueaks compared to the giants that came before us, and all that.

So let's do some reverse math. (Hey, I warned you people already.)

One million words, divided by twelve months, is 83,334 words per month. That still looks like a frightening number, so let's chop it down some more.

So let's write for four hours per day. Or 4,000 words. That's a half day at the keyboard, five days per week, so you've got the afternoon free. (Or you've slept in, fixed a leisurely brunch with mimosas, and started in after that and worked until dinner. Whatever).

It comes in scales now, since we're all Trekkers in this day and age.

For mathematical insanity, Pulp Speed Eleven is 3,000,000 words in any given year. I know that sounds like an crazy number now, but we'll circle back to it at the end of this book and hopefully by then you'll have a different take.

A word of warning on fast writing. And a bit of a history lesson.

The Pulp writers from the pulp era had an interesting time adapting to the era of so-called modern publishing. The big houses wanted novels, and wanted to publish an author every year in the same week. That got the readers accustomed to looking for the latest from their favorite, the same time each year.

When you are generating a novel every two weeks, rather than every year, the publishers couldn't absorb that amount of material. For some writers, they just stayed with the magazines as long as they could, and fired off the occasional long manuscript to an agent to shop for novel publication.

The other thing that happened was that a given author might be publishing under a handful (or more) of pennames. This was especially true if you wrote across multiple genres at once. A mystery reader will not generally cross over and read SF. Or romance. SF and Fantasy readers might be a little more flexible, but I know one woman today who is a best-selling author under several different author names, in SF, mystery, etc.

I know of another woman who died in the last decade or so, with over five hundred novels published in her lifetime, just under the pennames that people were able to attribute to her. Can we just say Wow?

In the modern (read: Indie) world, I can publish a novel each month. Or more. I don't have gatekeepers in the form of Agents or Publishers telling me that there are limits to what they can distribute. Those rules no longer apply, and I'll talk about the future in a later chapter.

We can write as the speed of the Pulp folks, and just publish on our own, and not wait for the Gatekeepers to keep a boot on our necks.