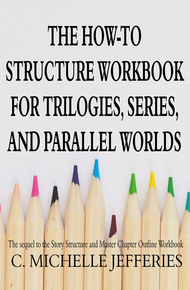 C. Michelle Jefferies is a writer who believes that the way to examine our souls is to explore the deep and dark as well as the shallow. To manipulate words in a way that makes a person think and maybe even second guess. Her worlds include suspense, urban fantasy, and an occasional twist of steampunk. When she is not writing, she can be found studying and teaching about structure, on the yoga mat, hand binding journals, dyeing cloth, and serving ginger tea. The author and creator divides her time between stories, projects, and mothering four of her seven children on the wild and windy plains of Wyoming.

They are fun to read, lots of authors write them, they're great for large worlds and big stories, some publishers love them, and if you do it right, you can create a loyal fan base. Yet they are hard to stay consistent in. Why is that? And how do we do the idea of an epic story justice? Think a sagging middle in a standalone book is hard to avoid, try not writing a whole sagging middle book or two.

That's okay. Series writing is not as hard as it can appear. Being successful in writing more than one book in a series, is doing the footwork ahead of time. And this is where this workbook comes in. With plenty of workbooking space for several series, this book is bound to become a planning favorite.

Trilogies use a very different structure than series books. There are plenty of series that have three volumes that have been mislabeled as trilogies just because of the number, but true trilogies are one story told through three books that go together.

Trilogies are typically written as follows. Book one, the writer presents the protagonist and other characters, setting, and story problem. Book two is to add to the protagonist's knowledge, add friends, and up the stakes. But, the bad guy is still winning until the end of the book, where the good guys get some knowledge that bolsters their confidence. Book three shows the protagonist's renewed faith, and the bad guys are defeated.

While you can read them out of order and alone, they are meant to go together. Often times, while they follow Hero's Journey, a firm seven-point structure is not there. Sometimes they even end on a cliffhanger. Some people say that the "father" of all trilogies is The Lord of the Rings. Tolkien originally planned on publishing the story as one big book, but the printers couldn't bind a book that big so the story was split into three parts and published as three books instead.

Trilogy examples are, of course, Lord of the Rings, Reconners by Brandon Sanderson, Lisa Mangum's Hourglass Door, and Charlie Holmberg's Paper Magician. Although the movie preceded the books by a long shot, a great movie example is the first three Star Wars: A New Hope, Empire Strikes Back, and Return of the Jedi.