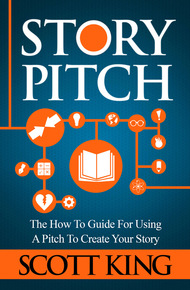 Scott King, an international best selling author, was born in Washington D.C. and raised in Ocean City, Maryland. He received his undergraduate degree in film from Towson University, and his M.F.A. in film from American University.

Until moving to follow his wife's career, King worked as college professor teaching photography, digital arts, and writing related classes. He now works full time as an author. King's non-fiction books are a way for him to get back that feeling of teaching a class, while his fiction books are his way of having fun.

Struggling to start your story or lost in the middle? You need a Story Pitch.

A standard pitch is meant for marketing and selling, but a Story Pitch is a powerful tool meant to be used when pre-writing and writing. It can help you jumpstart your novel, screenplay, comic, or whatever type of story you are trying to tell and it can be used as a corrective measure if you get off track during the writing process.

If you like honesty, no bull, a bunch of humor, and tons of examples in your writing guides, then you'll love Scott King's Story Pitch.

A pitch is a description of a story that a person uses to sell it. In Hollywood, it might be that a writer is pitching a screenplay to producers, hoping they buy it. In traditional publishing, it might be an author pitching a novel to an agent who would then pitch it to one of the big six publishers.

Anytime you meet someone and they ask you about what you've written, whether it's a novella, short story, or full-blown three-hundred-thousand-word epic, what you say back to them is a pitch.

Pitching is part of a writer's world. No matter how much you might hate giving one, you can't escape it. Book blurbs that appear on the back of a novel or on a retailer website are also pitches. They are carefully crafted descriptions meant to sell the story to a potential reader.

Whittled down, a Story Pitch is a synopsis that introduces the key elements of your story, serves as a guide post while writing, and creates enough interest to hook the listener so they'll want more.

I've found there are four basic building blocks of story.

At its core, story is a character that wants something and the conflict that prevents them from getting what they want. Those are the first three.

For example, if I said:

That isn't a story. It is a character taking an action, but without any context that action is meaningless. However, if I said:

That's a story. It's utterly simple and not very deep, but it's still a story. You have a character: Jamie. She has a want: getting the poison out of her mouth. And there is conflict: she doesn't know if the water will rinse the poison out.

Let's do one more, but even simpler:

A good gut instinct gauge on the two examples above is to ask if either makes you want to know more. In the first, Mary takes the action of sitting, but that's it. There is no want or conflict. In the second we know Mary wants to sit, because she tried to, and we know there is some form of conflict because she tried to sit, but something stopped her from actually sitting. We don't know what stopped her and already that is more interesting than the first sentence.

Although the core essence of a story is about a character wanting something and something else getting in the way of that want, there is one more thing involved. For example, what happens if a character doesn't get the thing they want? That's the stakes.

In our fleshed-out sentence we know that Mary wants to sit because she is hoping to hide from the assassin. If she doesn't sit and is unable to hide, I'm guessing things will go very badly for Mary. Assassins are not the kind of people who simply give hugs and walk away. Mary's life is on the line! Those are huge stakes! Of course, stakes don't always have to be life and death, but we'll talk about the various level of stakes later.

These four things—character, want, conflict, and stakes—are the basic building blocks of story. Every movie, novel, or piece of fiction can be broken down into those things. They are exactly what I taught in my other writing books, but for a Story Pitch, there needs to be more. In the tech world, they have a thing called "the minimum viable product" and when built out of those four things that's what a bare bones pitch is. It's still a pitch, but it needs more meat.

To write a Story Pitch you need to consider the other elements that inform story: genre, voice, and theme. Genre deals with the story you're trying to write. In many ways, it is the frame of your story and will impact the choices you make as a writer to meet reader expectations.

Consider the sentence below:

There is a bit of conflict. Hayden wants light, but the switch isn't working. Beyond that we don't really know what is going on. Knowing the genre of the story would help inform the reader what is happening.

If the story about Hayden was a comedy, chances are the scene would lead into him getting shocked when trying to fix the light or some sort of sitcom situation where he is hiding in the closet while overhearing something he shouldn't.

If Hayden was in a horror story, this would be the part where Hayden found the dead body, or was attacked by some gruesome monster.

If Hayden was on a space ship in a science fiction story, the light not working could imply lots of things, and knowing the story's subgenre would clarify the significance of it not working.

Genre informs the story, which allows the reader to better understand it and lets them form expectations of what is to come. Before starting a writing project, you should know the genre and have a sense of what the subgenres are. As with everything we're talking about, the genre or even subgenres might shift as you write, but knowing them going into the project will help you prepare for the daunting task of completing a first draft.

The next element of story is the writer's view of the story they are telling. Writers have a unique voice and when they write it shows up on the page. Voice is the inventiveness that the author brings to the table. It's their perspective on the world and of the story.

If we go back to the example of Mary:

If I turned the above sentence into a story it would most likely be a second world fantasy thriller with a bit of comedy. I would probably have the assassin be a love interest for Mary. The whole thing itself would then be commentary on the present-day dating scene. I can see Mary, a low-tiered noble servant accidentally going on a date with an assassin.

That's my take on Mary's story. Yours is probably very different. Maybe you read the sentence above and you didn't picture Mary dating the assassin or maybe you pictured a historical fiction piece or an urban fantasy. As writers, we bring ourselves to the story and our voice informs it.

Theme is the trickiest element to nail. People always get bogged down trying to define theme and sometimes the theme may not be clear and in the open. In a Story Pitch, theme can be summed up by the question, "What is the point of this story?" That might sound like a deep serious question. It can be, but it doesn't need to be.

Looking at our ridiculous examples with Mary and Jamie, let's try to infer some sort of theme from them:

The theme for the first might be that poison is bad and in the second it might be that you shouldn't make an assassin angry. Honestly, at this point neither has a strong theme and that's all right. Your story might not have a strong theme either, but for the sake of being over the top in these examples to make the points clear, let's rewrite both situations to help find the theme.

•Jamie drank the bottled water, hoping to flush the poison from her mouth. She never appreciated how important clean resources were until she moved to Mars.

•Mary tried to sit, hoping to hide, but the assassin made eye contact with her. She should have never broken her own rule of not bringing up politics on a first date.

In the first example with Jamie, we now have a theme touching upon environment and sustainability. The story is also set on Mars. So for all we know at this point, the story might be one in which the earth has already been ruined by pollution and humanity, and now humans are out trying to survive wherever they can.

In the second example with Mary, a reader could pick out several themes. Maybe that one should never date an assassin, or that there are some serious topics a person should never talk about when on the first date?

Theme will appear in your work whether you want it to or not. It's a jerk like that. Even if an author tried to tell a story without theme, theme would still be present. Sometimes that theme might show itself clearly in the first draft, sometimes it might appear several drafts in and sometimes it might be as simple as "drinking poison is bad."

To reiterate, the main elements of story are character, wants, conflict, stakes, genre, voice and theme. To create a Story Pitch, you mush them all together, which we will get to in a few chapters.