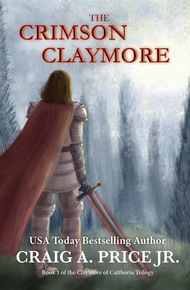 Craig A. Price Jr. is a USA Today Bestselling Author. His novel, The Crimson Claymore, an Epic Fantasy Adventure novel that has garnered millions of reads, was featured in fantasy, had more than 17,000 votes, and more than 1,000 comments/reviews on the social networking platform for readers and writers, Wattpad.

The Crimson Claymore - The Claymore of Calthoria Book One by Craig A. Price Jr.

Searon wanted revenge. What he got was an egotistical wizard and a quest he never expected ...

When Searon loses everything he once holds dear, he begins a quest for revenge, leaving behind everything except his Crimson Claymore. He runs into something he doesn't expect…a snarky wizard, who won't leave him alone unless he forms an army, an army that could fulfill his revenge, and save all of humanity in Calthoria.

Don't miss out on this epic adventure that takes Terry Goodkind's humor and mixes it with R.A. Salvatore's action!

Karceoles trotted down the hill before holding the reins close to Searon's side now. "Oh my, are you hiding melons under that chain mail?"

She glared at the wizard with intensity in her eyes.

"My name is Searon. I'm a warrior hunting the draeyks. This idiot next to me is Karceoles, a wizard," Searon said.

Searon's head shook in despair at the remark the wizard had made. He should have expected as much coming from the sarcastic wizard, but even he didn't think such a rude comment could come from the old man. He should have known better. Fool of a wizard.

"My name is Starlyn of the high kheshlars of Sudegam," she bowed slightly, showing a sign of respect.

"What are you doing out here?" Searon asked, still not finding an opportunity to gaze away from her blazing eyes.

"I may ask you the same question. A simple human and an old wizard, hardly threatening to these wild creatures," she said.

"I think you would be surprised," Searon said, eyes darting to the wizard.

"I see … and why are you after the draeyks?"

"They are foul creatures that have been striking humans for too long, and it is time for their demise," he snapped.

Memories flooded his mind like overflowing rivers collapsing over cliffs in waterfalls. It pained him to have such thoughts circle in his mind. He gritted his teeth using all his will to push the horrors of his past away.

Starlyn nodded. "I have been keeping the draeyks contained so they won't strike Sudegam."

Searon noticed she seemed to withhold as much information about her reasoning to fight the draeyks as he did. He quickly brushed it off, as he wasn't ready to tell her the reason behind his bitterness toward the creatures either. Every time he did speak of it, he felt on the edge of fresh tears he wouldn't allow to fall.

"You're not doing a very good job protecting the humans from them," Karceoles snapped with bitterness.

"By keeping the creatures away from the kheshlars, you have provoked them into killing humans," Karceoles spat.

"That is not my concern; I am a kheshlar," Starlyn snapped.

"Congratulations, you know what it is that you are," the wizard said softly.

"I don't have to stand here and listen to this," Starlyn barked, turning away and clenching a fist.

He knew the wizard didn't have a way with words, and he wasn't even sure if he could convince her of anything. He did know he had to try. The wizard seemed clouded in judgment with his newfound bitterness toward the kheshlars. He hadn't realized the wizard cared so much for humankind before, and he didn't understand why. The woman in front of him seemed to be the only kheshlar actively fighting the draeyks. With her help and skills, they would be able to confront many more draeyks.

She turned around to study him, biting her lip before licking it with her tongue. An eyebrow rose on her face, and she waited. There seemed to be a lack of patience on her face as she glanced a few times toward the wizard.

"If you don't like these creatures, why don't you help us? We're on our way to attack their camps and settlements," Searon said, appearing sincere.

He tried to keep his voice as neutral as he could to avoid discrimination against the kheshlars but still wanted it to remain clear they would be denied for help. She glanced from Searon to Karceoles a few times with doubt on her face.

"How do you expect to kill them all with one human and an overly annoying mage?" she asked glaring at Karceoles now.

"Wizard," Karceoles corrected with annoyance in his voice.

She glared daggers at him with eyebrows crunched together and eyes swollen.

"With the element of surprise on our side. We will move too quickly for word to get out. Victory has never been my objective. I have fully expected to not come back from this, but with your help we may be victorious. With or without your aid I will do this. The wizard seems to think there will be a war and with your help we can destroy them once and for all. I had my doubts, but that was before I saw you fight. I believe he is right. If you will not aid us, I will continue my plan, and I don't expect to return. Until now, that has always been my goal," Searon said.

Searon gulped as he finally admitted what he had always known since he set out on the quest. He probably wouldn't come back, and he hated to realize it. He only had the need to take as many of them down with him as he could before being struck down himself. Then he could rest in peace and meet his family once again in the afterlife.

"Can you keep the wizard in check?" Starlyn snorted with a half smile.

"No … probably not. You'll just learn to tune him out like I have."

He glanced back to the wizard, who smirked at him now. He felt sure the wizard knew much of what he said went in one ear and straight out the other.

"All right, I'll help you, but there's something I must tell you first." Starlyn shuffled uneasily.

He looked genuinely concerned as if hoped he could accept what she had to say. She shifted her eyes, looking at him hard in the face before quickly blushing. It seemed as if the kheshlar had been checking him out. He shifted uneasily. He could tell what she had to say to him would be hard for her, and he knew if they were to travel together, one day he would have to tell her about his life.

"My sister … changed years ago … she left with the draeyks. She led them in a war against the kheshlars, and I injured her to protect Sudegam. I believe she is still with them. I want to destroy the draeyks as much as you but … but I will not kill my sister. She is not to be harmed. If we encounter her, we capture her and bring her back to the kheshlars," Starlyn demanded.

She sighed as she seemed to reminisce of her times with her sister. Her eyes closed before opening with fresh tears drizzling along her cheeks.

"As you wish," Searon said.

He couldn't imagine what it would be like to lose a sibling to the draeyks. At least his family had only been destroyed instead of turning them as dark as Starlyn's sister now apparently had become. He didn't know if he could bear such a thing happening to him.

"Good, now I have something more attractive to look at." Karceoles smirked.

Starlyn stood and glared at the wizard with ice in her silver sapphire eyes.