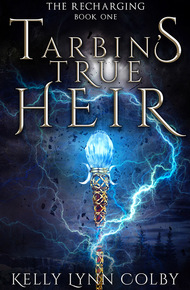 Kelly Lynn Colby is a writer of all things fantasy. Whenever she tries to create a mundane story, a dragon pops in to take over. She eventually stopped fighting and caved to the magic. The dragons must have known something she didn't, because her debut novel, Tarbin's True Heir, won a bronze medal in the IPPYs for fantasy in 2018. She has short stories in many collections, including Eclectically Heroic, Eclectically Magical, Cursed Collectibles, and Winter Whimsy. To learn about Kelly and the fantastical worlds she likes to play in, visit KellyLynnColby.com.

Talia Winterlaus wishes nothing more than to control her own destiny. She longs to serve her people to a greater extent than a politically advantageous marriage. After all, she was the first born, leaving the womb minutes before her brother. She dependably studies and trains harder than her lame excuse for a twin.

Tanin Winterlaus is tired of the king, their father, showering Talia with his affection and praise. Tanin is the heir apparent. He deserves to wear the crown and rule the people without having to play second fiddle to his sister. He can't wait until she is wed and out of his hair for good.

Their feud comes to a head when Talia is given the chance to participate in the Forging Quest alongside Tanin. They must search the continent in a year long journey to find five jewels lost from the Tarbin crown. In the end, the newly bejeweled crown and the proper blood will choose who wins the title True Heir. A title that means more than either imagined.

Talia pulled the knife from the ground, grasping the blade to offer it handle first to her husbandry guardian. As she stood, a bout of dizziness hit her. Her grip tightened on the knife as her free hand searched for a solid handhold. Ial grabbed the handle as Dew steadied her other hand.

"By the Dark!" cursed Talia, releasing the knife to Ial. A small, but deep, cut graced her palm.

"Let me see." Nyna grabbed the princess's hand. "Deer blood and dirt. A challenge. Let me get the cloth and ointment from my bag."

"It's fine. We can clean it when we get back to the castle." Talia resisted the urge to put the dirty cut in her mouth to stop the bleeding.

"Nonsense. I have everything I need here." Nyna rifled through her shoulder bag, pulling out a small clay jar and a rag.

"We'll get dinner ready for transport." Naul pulled the carry pole from its strap on his back. "Ial?"

The husbandry guardian grabbed the rope. As the two manipulated the carcass, the smell intensified, turning Talia's stomach. She focused on the bright green leaves of the Naddle tree overhead.

"I have to clean the wound." The medicinal guardian hummed, taking Talia's hand once more.

"Do you have to take such pleasure in my pain?"

"Ending your suffering brings me pleasure." Nyna tapped the bottle on the cloth, but nothing came out. "I need some water to loosen up the ointment. We don't get injured enough. It's gone dry."

"Oh, you poor dear, we'll have to go back to our weekly stabbings to keep your supplies circulating." Dew waved her water bladder at Nyna.

While her companions bantered, Talia leaned against the Naddle tree. She always loved this tree. The only one of its kind in the entire Royal Forest. Sometimes, in the middle of the night, she would feel it calling her. As a little girl, she would sneak out and hide in its roots. When the guardians joined her life, all five would frolic in the clearing under its towering branches. Talia thought it fitting that the key for her graduation ceremony ended at her favorite childhood playground.

A tingle coursed through her body. Talia took a deep breath and let it out slowly. She normally wasn't bothered by blood. She didn't know why she felt so out of sorts.

By her feet, she noticed a flash in a pile of leaves. She pushed the clutter away with a booted toe, revealing a ring with a small green gemstone mounted on it. It looked like an emerald. The tingling she'd felt intensified; her limbs hummed. Forgetting about the cut on her palm, she turned the stone between her hands, trying to determine its origin. The green stone had to be cut glass. No one would misplace such a valuable piece of jewelry and not report its loss.

Talia frowned at her blood smeared across the emerald. She held the ring pinched in her fingers and reached into her satchel for a cloth. Her blood soaked into the stone. The princess held the mysterious emerald away from her body with the tips of her fingers. A bluish glow emanated from deep inside the gem. Talia jumped back. She dropped it into the forest debris. The glowing faded as it fell.

"Did you see that?" Talia backed up until she collided with Nyna.

"See what?" Nyna grabbed Talia's hand and smeared cool ointment on it without looking up.

A glowing ball of light flew into the branches over Talia's head. The princess pointed, her mouth agape.

"We're ready if you are." Naul lifted his end of the litter to his waist while the other end laid on Ial's shoulder.

The buck hung upside down from the sagging pole perfectly horizontal. The entire image was disorienting. Talia's mind wanted to slant the pole at an angle since it was in one companion's hand and on the other's shoulder. The difference in height between Naul and Ial was so drastic the pole remained level with the ground. Dew and Nyna burst into laughter.

Ial cocked his head at the hysterical women.

"I think Naul might be part giant." Dew managed to squeeze out between laughs.

"Or Ial part dwarf." Nyna covered her giggles with her hand.

"Can you laugh at us later?" Naul kept walking past the women. "This deer is heavy."

Ial stuck his tongue out at Nyna, who fell to the forest ground, clutching her bag to her chest.

"No, I mean, did anyone see that light?" Talia stared into the thick branches. Beams bounced among the boughs. Maybe the shine she saw was simply filtered from the Light's Daughter.

She bent down and tossed aside half decomposed leaves, lifting a wet mold smell into the air. The emerald was gone. Talia held her bandaged hand against her chest, puzzled. Her companions stopped laughing.

"Are you alright, Princess?" Dew bent down beside Talia, searching her eyes.

Princess Talia stood and looked away. Her guardians couldn't fathom the stress she was under. At the Graduation Ceremony, Talia would receive more attention. She'd earned higher marks than her brother in every area of study, including hand-to-hand combat. Her success should thrill her.

As Tanin liked to point out, her in depth schooling prepared her to be the perfect wife for a noble husband. That's all. Her only purpose. Talia's soul screamed she was meant to be so much more.