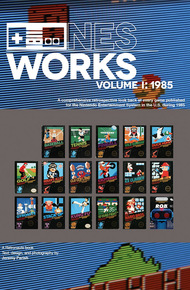 Nintendo launched its Family Computer console — Famicom — in its home country of Japan in July of 1983. In October 1985, after two years of false starts and failed gambits, they finally brought the system to the U.S. as the Nintendo Entertainment System. It became a monster hit… but that success was never guaranteed.

NES Works Vol. I: 1985 explores the console's difficult journey to America, where it had to overcome disinterested retailers and a crashing industry through a grassroots marketing campaign. But Nintendo was armed with some great games, not to mention a charming robot companion, and this book explores them all — and more.

The retrospectives in this volume detail relevant historic, cultural, and technical for each individual game. Additionally, every game is presented with high-resolution photography of its original packaging, along with screen shots captured from actual NES hardware, as well as detailed supplemental information. Finally, the Famicom 1983 supplement contrasts the NES's first wave of games with its Japanese launch lineup. It's the first volume of the most comprehensive Nintendo retrospective ever!

Jeremy Parish continues to cement his reputation as one of the go-to historians on Nintendo history. From game design to designer history and each title's impact on popular culture on its genre, NES Works Volume 1: 1985 presents a definitive account of how a Japanese playing-card manufacturer left an indelible mark on the burgeoning electronic entertainment scene. – David L. Craddock

It was never a given that Nintendo would find its place in history as a video game publisher. Sure, the company had its roots in gaming and entertainment—it got its start in 1889 as a playing card maker—but the road from grey market hanafuda manufacturer to purveyors of family icon Mario was long, rocky, and involved many unexpected side excusions.

The late Hiroshi Yamauchi had responsibility for steering the company thrust upon him at a young age, and he ran the company with an iron-fisted, no-apologies approach. Most of Nintendo's business ventures were based primarily on Yamauchi's own gut feeling... and for the most part, he had fairly canny instincts. That's not to say every decision he made was a winner. Sometimes, he had great ideas undermined by unforeseen circumstances, as with the crushing blow the OPEC oil crisis inflicted to his vision of light gun installations to replace failed bowling alleys. Other Nintendo ventures, on the other hand, were just straight up disastrous in their own right. Like the instant noodles they attempted to sell without checking first to make sure they were up to the same standards as Nissin's Cup Noodles.

"Like x but not quite as good" more or less defined Nintendo's output for the first 30 years of Yamauchi's tenure. For every innovative concept they put out, like Gunpei Yokoi's Ultra Hand or the Kosenjuu SP light gun series, Nintendo had half a dozen products that amounted to shameless, off-brand versions of popular creations (like Nintendo Block, a LEGO ripoff so blatant that there should have been a lawsuit). And nowhere was this imitative lack of imagination more evident than in Nintendo's first decade of video games. The company effectively entered the arcade gaming market because it had an amusement business infrastructure in place and video games seemed a thing to do.

But those early Nintendo video games were rather less than inspired. Its initial standalone home console releases amounted to little more than the same old Pong clones that were cluttering up department stores around the world, debuting a full three years after the first Home Pong units arrived—a terrible case of too little, too late. Nintendo's arcade releases fared no better, alternating between unremarkable (Sheriff, an early top-down shooter), stodgy (its sit-down Othello cabinet), and insipid (its flood of Space Invaders clones, whose failure to reflect changing trends in games or appeal to international tastes nearly sank Nintendo's American branch before it even got a proper start). It wasn't until the '80s that Nintendo's video game division stopped fumbling around and pulled itself out of its morass.

Both Gunpei Yokoi's Game & Watch handhelds and Shigeru Miyamoto's Donkey Kong turned out to be the biggest hits the company had ever experienced. It was only then that the formula for success became clear: New ideas, inventive applications of technology, and respectable quality control. More easily said than done, of course, but one fact quickly became self-evident: In order to make its games business work, Nintendo would have to move away from dedicated devices and toward the console business. This was hardly a radical idea (Atari had popularized interchangeable cartridges back in 1977), but it was new for Japan. No Japanese company had yet released a competitive cartridge-based games machine, and American machines had almost no presence in Japan at all. This was presumably due in large part to an unfavorable dollar-to-yen exchange rate (which would be normalized by the Plaza Accords in 1985—just in time for Nintendo's entrance into the U.S. home market), but in any case the Japanese games industry could easily have gone the same direction as in the U.K., where microcomputers ruled throughout the '80s. Yamauchi put the head of R&D3 division, Masayuki Uemura, on the task of creating Nintendo's first proper game system. His task: To create a console that would accept cartridges, cost less than ¥10000, and play a mean game of Donkey Kong. And it needed to come out sooner than later, because the Game & Watch line was already fading from its initial popularity and rival arcade manufacturer SEGA had begun test marketing its own console.

Uemura, an engineer who had worked with electronics giant Sharp, called in every marker, drawing on every business relationship he could. The result: The Nintendo Family Computer, or Famicom for short. Nintendo's console hit the market on July 15, 1983—ironically, the same day as SEGA's SG-1000. Uemura didn't manage to hit Yamauchi's price mandate, but ultimately that made little difference. Even with the cost overruns it remained competitively priced, and the technology inside its colorful plastic case absolutely eclipsed that of the rival SG-1000.

SEGA had gone with a fairly standard hardware set based on the Z80 processor; the SG-1000 turned out to be so similar in specs to the ColecoVision that cross-platform conversions between the two systems have become one of the easiest and most popular forms of aftermarket fan bootlegs around. On the other hand, the Famicom incorporated a chip based on the MOS 6502 standard, which was less common in Japan than the Z80 but proved more versatile. Uemura's team made some modifications to the 6502's standard instruction set, adding a few new features and discarding others, but its basic specs put it in a class above contemporary consoles. It could handle dozens of four-color sprites at once, included five channels of simultaneous audio, boasted a palette of 52 colors, and most of all the ability to scroll the screen smoothly, pixel-by-pixel, either horizontally or vertically.

The Famicom also featured a certain degree of extensibility, a fact that would come into play with the Famicom Disk System expansion and in specialized cartridges containing their own co-processors to improve on the console's innate capabilities. While the Famicom's hardware would soon be eclipsed by the competition, it managed to punch above its weight class for years to come thanks to ambitious developers and expanded cart capabilities. Uemura's decision to make the Famicom expandable would prove a tremendous asset for the console, allowing it to survive well into the '90s. In fact, the final official release for the console in any region would be Wario's Woods, which launched in the U.S. a week after the Sony PlayStation debuted in Japan. Back in the early '80s, however, the Famicom sparked a home gaming revolution in Japan. Personal computers would remain popular, but the mainstream gaming format of choice for Japanese kids would be consoles—and, specifically, the Famicom.

The Famicom wasn't an instant success, though. The console had something of a rough start, with only three games available at launch. Those three games had been astronomical arcade hits, but the biggest of them—Donkey Kong—was two years old and getting a little long in the tooth. The Famicom offered the best-looking and most faithful home port by far (its missing stage notwithstanding), but it was a bit dusty, and the console's lineup throughout the rest of 1983 had only one truly fresh release on tap, Mario Bros.

To make matters worse, the original Famicom model proved to be critically flawed. The processor contained a defect that could, in extremely rare circumstances, crash the console. More crucially, the original control pads proved to be unreliable. The square shape of the A and B buttons, and the fact that they were molded in the same soft plastic as the Select and Start buttons, caused their corners to become caught in the controller housing. Since the Famicom shipped with both of its controllers permanently wired to the console, this made for an irreparable shortcoming.

Nintendo made the hard decision to recall its initial shipment of consoles, replacing early units with new, defect-free CPUs... and, in the process, redesigning the controllers to feature hard, round, jam-free A and B buttons. Rather than destroy the Famicom's reputation, the recall reportedly gave Nintendo a favorable reputation among the Japanese public. A voluntary recall for a quality-control issue that other manufacturers might have simply shrugged off made the company look commendable, more concerned with doing right by consumers than with the bottom line.

By the end of 1984, the dicey early console models had long since been flushed from the retail pipeline; the first-party software lineup had improved considerably; third-party games had begun to appear; and the Famicom had sold a dozen times as many hardware units as the SG-1000. Nintendo had a legitimate hit on its hands... and the truly great games like Super Mario Bros. were still a year out.

To Americans familiar only with the NES, the Famicom can seem a strange creature indeed. It's tiny, the plastics look and feel toylike, the controllers can't be removed, it loads from the top, and there's a microphone built into the second controller, of all damn things. Likewise, the Famicom's peripherals seem bizarre next to those that came out for the NES. The console literally could be a family computer, with a keyboard and tape cassette deck that turned it into the equivalent of the Coleco ADAM or the SG-1000's home computer alternate version, the SC-2000. Later, it would receive its own diskette drive. And on top of that, peripherals plugged into a small expansion port on the front of the machine! Truly, it feels some alternate reality NES—a fact further cemented by the strange sound effects and music present in Japanese versions of many popular NES games... all made possible by expansion capabilities of the Disk System or Japan-exclusive third-party mapper chips.

And yet, at heart, despite all the changes it underwent in its journey to the west, the Famicom is recognizably the Nintendo Entertainment System in an alternate form factor. While the specifics may have differed between regions, foundational classics ranging from Mega Man II to Super Mario Bros. 3 look and play essentially the same on either system. Nintendo wasn't necessarily destined to become a video games company, but its first attempt at creating a video game console reshaped the nature of games forever... in both Japan and America.