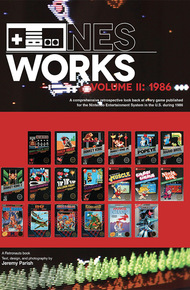 Nintendo made a tentative effort to bring its Famicom console to America in 1985, rechristening it the Nintendo Entertainment System. In 1986, they went nationwide.

NES Works Vol. II: 1986 continues the story of the console's journey into the U.S. beyond its initial debut. This volume explores in depth the 19 NES games that shipped in America over the course of the year 1986: The second wave of Nintendo's own Black Black releases, including home versions of beloved arcade hits like Donkey Kong and Mario Bros., as well as a lineup of third-party releases like Ghosts 'N Goblins and Gradius. The NES library hits new highs and lows across 1986, but there's never a dull moment.

The retrospectives in this volume explore relevant historic, cultural, and technical for each individual game. Additionally, every game is presented with high-resolution photography of its original packaging, along with screen shots captured from actual NES hardware, as well as detailed supplemental information. Finally, the back-up supplement — Famicom 1984 — contrasts the NES's second year in America with the same phase of its life in Japan. The most comprehensive NES software retrospective ever continues!

Nintendo and its NES were just getting warmed up in 1985. As historian and journalist Jeremy Parish proves time and again over the pages of NES Works Volume 2: 1986, the console came into its own during its sophomore year, and Parish's writing overflows with anecdotes and technical details from each NES title released during '86. – David L. Craddock

Beyond the Black Box

With its chronological rundown of games released alongside the Nintendo Entertainment System in October of 1985, the first volume of this series presented a compelling narrative arc. We watched as Nintendo went from neophyte to major player in Japan, met a chilly reception upon its introduction to U.S. toy retailers, and ultimately undertook a grassroots launch campaign powered by an impressive (and impressively marketed) console. NES's journey through 1986, on the other hand, encompasses a somewhat more modest tale. You'll see Nintendo's full roll-out into the national U.S. market, the second wave of NES launch titles, and ultimately the checkered arrival of third-party publishers. You could see this volume as a sort of sophomore slump: A lacuna in software scope as Nintendo focused on rolling out its product nationwide, gearing up for the many impressive offerings that would arrive in 1987. Mundane though it may be, 1986's lineup merits exploration. It brought a healthy roster of arcade classics, third-party works, and all-star developers. You'll also encounter a few other notable firsts here, such as the first game developed by Nintendo exclusively for the U.S., the first U.S. releases openly based on licensed properties, and the first appearance of mysterious silent development partner TOSE. There are some legitimate classics to be found here… alongside quite a few games best forgotten.

The story so far

When last we saw the NES [in NES Works Vol. 1: 1985], Nintendo had attempted to parlay its success with the Donkey Kong coin-op and the Game & Watch LCD handheld line into a console. Soon after the system's July 1983 Japanese debut, Nintendo looked to bring the console (the Family Computer, or Famicom for short) to the U.S. Unfortunately, the U.S. console market had gone belly-up just a short while before, and retailers no longer had any confidence in video games. Nintendo tinkered with its sales pitch, presenting the Famicom as the modular Advanced Video System computer before streamlining it down to the Nintendo Entertainment System: A VCR-like "control deck" running "game paks" and controlled alternately with a D-pad, the Zapper light gun, or a toy robot called R.O.B.. Also on-hand: The spectacular Super Mario Bros. With no distribution partners to be found in the U.S., Nintendo arranged a limited test launch of the NES for the 1985 holiday shopping season. The console was a hit, and Nintendo decided to expand nationwide. Which brings us to…