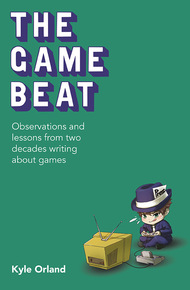 Kyle Orland got his start writing about video games at age 14, when he started fan site Super Mario Bros. HQ on his parents' AOL web space. Since then he's somehow assembled a career writing and talking about games for over a dozen outlets ranging from NPR to Joystiq to Electronic Gaming Monthly. Kyle is the author of Wiley Publishing's Wii for Dummies and Farmville for Dummies and previous Video Game Book Bundle offering The Game Beat (now published by Carnegie Mellon's ETC Press)

Kyle is currently the Senior Gaming Editor at Ars Technica.

The Game Beat by Kyle Orland

The Game Beat examines the whos, hows, and whys of the game journalists covering the young but growing game industry over the last 15+ years. This collection of more than 80 columns pulls from dozens of writers past and present on everything from the near-death of print gaming magazines to the ethics of attending paid junkets to how much review scores really matter. The Game Beat is essential reading for anyone who writes about games and anyone who just like to read about them.

Author's Note: I write not this a week after attending a lavish two-day Fallout 76 junket in an extremely expensive West Virginia resort. I was lucky enough to drive myself to the event and pay for my own hotel room through my outlet's travel budget. The vast majority of the attendees did not need to, thanks to Bethesda's largesse. So this is not a problem that's exclusively in the past.

Editor's Note (published with the original): This article was originally commissioned as pitched (and written) by a major video game news outlet, then killed upon receipt because an editor thought it would "cause too many problems." I present it here as it was presented to that outlet.

This April, a group of a few dozen game journalists flew off to a beautiful Hawaiian resort for a three-day trip. The occasion wasn't some sort of industry-wide retreat or group vacation, but rather a Capcom game preview extravaganza known as Captivate. There, these select opinion-makers of the game industry enjoyed some of the best accommodations Hawaii had to offer, many of them on Capcom's dime.

Ostensibly, the purpose of these kinds of events—known as junkets in the industry—is to write up early access previews of upcoming games and interact with the people who make them. But the fringe benefits of these publisher-sponsored junkets—which can range anywhere from free food and drink to flights and hotel stays to exclusive trips in military fighter jets and Zero-G suborbital planes—can draw controversy for their effect on the way games are covered.

"You can argue that you can continue to be impartial in that situation, but the company paid for your plane ticket and hotel room in an island paradise," said Ars Technica Gaming Editor Ben Kuchera, who does not accept paid travel from publishers. "They are paying for your food and your drinks. It is not the best circumstance for a sober, measured look at these games."

Of course, the journalists that accept these trips insist that the all-expenses-paid trappings are beside the point. "I won't lie, Hawaii was nice," said Destructoid Editor-in-chief Nick Chester, who let Capcom pay for his trip to Captivate. "I'd never been before! But really, I was there to do work, and I'd say I spent the bulk of the time watching presentations, playing games, and speaking with developers."

For Chester, and many other journalists I spoke to that accept paid travel from game publishers, taking a free trip to a junket is the best way for them to inform their readers. "There's simply no way we could have been able to cover the event if Capcom hadn't covered the costs," Chester said. "We're in the business of delivering to our readers the information that they want—it's why they keep coming back for more. [If we hadn't attended] our coverage would have suffered greatly, and our readers would have been forced to look elsewhere."

Those that attend junkets also stress that a free trip doesn't guarantee a good review for the games on display there. "I'm about to give Lost Planet 2 a 5/10 rating because it was a horrible experience," said Maxim Gaming Editor Gerasimos Manolatos, who had Capcom pay for his trip to Captivate. "It wouldn't have made a difference to me if it was the grandest party of all-time ... it could have taken place in my living room." [Editor's Note: After this story first ran on The Game Beat, Nick Chester wrote in to note that he gave Lost Planet 2 a 4/10]

All of which inevitably leads to one question: Why do publishers pay for these junkets in the first place? Capcom Senior PR Manager Melody Pfeiffer says the trips are more about securing a journalist's attention than their opinion. "Our annual event, Captivate, was first inspired by the idea of creating a full 'Capcom Experience' where press would have three days to spend playing our upcoming lineup, getting to know our producers and discussing our games with their creators," she said. "We didn't tell them that in order to be invited they have to write about everything they saw and in a positive way. This is up to them to decide, we just gave them the opportunity to do it."

But many journalists think there's more to a junket than getting journalists' attention. "Let's be logical here: no company gives you money for nothing," Kuchera said. "If your site has been given thousands of dollars worth of flights and amenities, there is an expectation there. It's not as sinister as a straight bribe, but PR will always position itself to try to get the best coverage of as many of their games as possible, and they spend money to do that."

And some journalists think that's money that could be better spent elsewhere. "Keep in mind, these events are very expensive," said Joystiq Editor-in-chief Chris Grant, who maintains an editorial policy against taking paid trips from publishers. "The money that a company uses to finance the travel and, to some degree, vacations of a few dozen of the country's gaming press is money that, ultimately, is coming out of consumer's pockets."

While many outlets somehow disclose when coverage comes as a result of a publisher-funded junket, Grant worries that gamers don't really understand what goes into the game previews they read. "From what I can tell... readers do not realize the nature and frequency of events like these and, even more disappointingly, most of them don't seem to care," he said. "It's not a matter of whether or not I trust my writers to remain impartial in the face of gifts and free trips; it's more a matter of whether readers can continue to place their trust in us if they know we accept those things." Some journalists, though, argue that their readers' trust isn't such a fragile thing. "We are an enthusiast press, and as such, we work closely with publishers and developers," said Tom Chick, a freelancer who writes for Syfy's Fidgit gaming blog. "It's important that readers realize that, but it's also important that they know they can trust some of us. I spent two days in Hawaii looking at Capcom's upcoming game line-up. I really like Lost Planet 2. There is no causation between the former and the latter. That's where my reputation hopefully comes into play."

In the end, most who write about games acknowledge that managing junkets is a balancing act. "The fact is, we, the press, are there as guests," said GamingNexus Staff Writer Jeremy Duff. "And it is up to each of us individually to walk the fine line of being a gracious guest while still maintaining our responsibility to our readers."