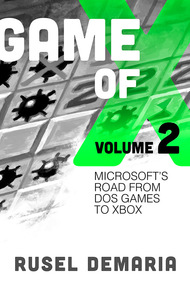 All in all based upon interviews with nearly 50 people at all levels of the organization, Game of X v.2 is the first book that fully details the history of Microsoft and its relationship with games, leading up to Xbox. The first part of the book look as Microsoft's surprising earliest experiments in games, even before Flight Simulator. Games were always present at Microsoft, from early commercial experiments to behind-the-scenes experiments by engineers in other divisions, such as the Word and Excel teams, leading to the release of numerous Microsoft Game packs and the ultimate establishment of the Game Division.

When it became clear that Windows would kill the thriving DOS games market, a small team led by Alex St. John, Eric Engstrom, and Craig Eisler – all members of the Developer Relations Group – unofficially began to explore and develop technologies that would allow Windows to be become a powerful technology for games and multimedia, but their largely unofficial efforts ran counter to the main thinking of the of the most powerful groups at Microsoft driving the development of Windows and Windows NT, which was planned to replace Windows as the main operating system, but which had no way to play games or multimedia. The software designed to fix the problem was called DirectX, and its developers were working in the shadows and constantly bucking the system. St. John had a knack for disruption, and in this book for the first time the real nature of the DRG is revealed: to support Windows developers and help them succeed and to operate behind the scenes as saboteurs, working to promote the Windows operating system and by various means, to help destroy Microsoft's rivals. It was in this dark side of the DRG that the four operatives who were developing DirectX in secret also excelled.

As part of the DRG mission to "assist" rival companies to fail, St. John, Engstrom, and Eisler became masters of deceit and disruption, and they turned these skills against the mother ship. The stories of their exploits, but within and outside of Microsoft are chronicled in detail here with extensive first-hand accounts.

Things got really crazy at Microsoft, with massive multimillion dollar parties of dubious taste, some involving crazy bands and themes, a giant penis monster in one, and live lions and slaves in another, and a highly effective "anti Microsoft" campaign led by St. John, DirectX was deviously rammed into Windows. The whole story is highly unlikely, entertaining, and bizarre.

Capping the DirectX story is the crazy internal war about 3D graphics that shook up the company and led to acrimonious email threads that ultimately led to St. John's firing, not before his team had established Direct3D as the official technology and an integral part of DirectX. And why is this significant? Because it was Direct X that enabled Xbox, the subject of Game of X v.1. Without these antics and insane behavior and events, it's possible that Windows' gaming would have been set back for years, and Xbox might never had happened.

How did Microsoft go from operating systems and word processors to advocates and creators of one of gaming's most powerful consoles and brands? Rusel DeMaria's Game of X v. 2: The Long Road to Xbox does a fantastic job going behind the scenes to show how a command-line interface, a suite of programming tools, and wild parties paved the monolithic software creator's path to console dominance. – David L. Craddock

In its earliest years, Microsoft was not quite sure what it wanted to be when it grew up. With their Microsoft Disk Operating System (MS-DOS), they held the keys to the rapidly emerging personal computer market. While companies like Apple, Commodore, and Atari were creating personal computers, it was the entry of "Big Blue," with the IBM PC coupled with the transformative spreadsheet Lotus 1-2-3, that started the landslide of personal computer adoption – primarily as work machines. And as IBM PC clones began to proliferate, Microsoft was still in control and DOS was king.

Even so, IBM dwarfed Microsoft, a scrappy startup. But Microsoft's Bill Gates and Steve Ballmer were ambitious. They were hardly content to own the operating system alone. They wanted to create a company that expanded into different markets. They created their first spreadsheet, called Multiplan, in 1982, which enjoyed some success on the pre-DOS CP/M systems, but was clobbered by Lotus on DOS systems. They released the first Excel spread-sheet on Macintosh in 1985 and the DOS version in 1987 to synchronize with the Mac version. In 1998 they also released the first version of Office with versions of Excel, Word, and PowerPoint – the first version of a suite of business applications destined to become dominant under Windows several years later, and with more than a billion customers to date.

It was definitely a part of Microsoft's DNA to expand and take over different market segments. Early on, they produced various versions of the BASIC programming language under IBM's brand and have continued to produce programming and system tools. But in those early days, they also experimented with hardware and publishing, in effect trying things on for size. They even dabbled lightly in games, initially by distributing SubLOGIC's Flight Simulator.

This book is about people and technology, a unique and contentious internal culture, conflict, strategy, courage, and vision—with a good dose of calculated craziness, devious manipulation, outright skullduggery, and accidental successes. It is a book of stories based on the words of the people who lived them. And finally, it is about the forces within and outside of the company that drove Microsoft, reluctantly, to become a major player in the video game industry and technology. It's about the growth of an industry giant in business software that always found reasons to support a minimal interest in games and ended up risking billions it never planned to spend – on games.

This is Microsoft's long road to Xbox.