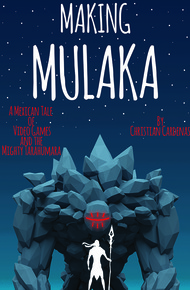 Christian Cardenas has edited and contributed to Heroines of Gaming and What Your Teachers Are Playing. He teaches Literature in High School where his students once played Fortnite, but are so over it now. His favorite games include Mass Effect 2, and The Witcher 3, where he romanced Yennefer, but meant to stay with Triss. He lives with his wife and daughter in California's San Fernando Valley.

Come and enter the Sierra mountains and desert city of Chihuahua, Mexico, where a team of local game developers defied the odds to make Mulaka. Inspired by the mighty Tarahumara, the indigenous runners of Northern Mexico, Mulaka is a breakthrough indie game celebrated for its cultural approach and authenticity in the gaming world. Making Mulaka is a story of chasing leads, of chasing dollars and pesos, and of chasing a dream. Discover the story of Lienzo and support diverse narratives in our expanding games industry!

Developer Lienzo's Mulaka was inspired by the culture of the Tarahumara, and the 3D action-adventure's beautiful graphics inspired Select Start Press author Christian Cardenas to write Making Mulaka, a book as richly detailed as the game on which it's based. Cardenas does a fantastic job exploring the developer's approach to game development, but even more importantly, his writing gets at the heart of the culture at Lienzo, which formed the bedrock of the game's aesthetics and gameplay. – David L. Craddock

And this is why when the pie-in-the-sky question "What if we made a Zelda-like game based on the Tarahumara?" was asked, it wasn't a bad idea. The Tarahumara, or Rarámuri (meaning "light footed ones") as they refer to themselves, have a story that deserves to be told on a wider scale. When I asked Edgar why did he chose the Tarahumara and not the Aztecs or Maya, the de facto representatives of pre-colonial Mexico, he simply answered, "Because they're alive." He made it clear that while he recognizes those other cultures as being profoundly significant for Mexican heritage, their stories have been told repeatedly. The Tarahumara on the other hand are not extinct, they're not unreachable or indecipherable, they're here, among us. Their numbers are dwindling and their language is waging a war of its own because of the need for assimilation, which is why they should be a focus. They're an integral part of not only Mexico, but Chihuahua specifically, where the young Edgar and Rico grew up alongside them. Though few, the Tarahumara are a common presence in town; they play their handmade violins for what meager pesos they get in return, take hours long bus rides from the mountains to work whatever low wage job will take them out of the dire need for sustenance, have miniature souvenirs of themselves bought and sold, all while the modern world races forward.

The Tarahumara, as has been revealed through the unearthed stories of Servín, are a people that speak the language of the sun, are created from the stars themselves, and are the very pillars of the world. If videogames are in fact the ultimate medium for storytelling, as Edgar fervently believes, then this game always had to be made, it was just a matter of when.

Rewind to the midafternoon play session in which the question was first proposed and assume Edgar Serrano and Adolfo Rico made the game on the Tarahumara at that time, with that budget (meaning no budget), entered contest X, and won the prize for making a product with some kind of social or cultural impact. End of story. They'd have won a few thousand pesos, had a minor blip of local fame and that would be it. That version of their story would certainly have been made up of far more subdued twists and turns. But the fact of the matter is that they didn't win contest X, because they never even entered it.

Apparently, the government sponsored contest only paid for minimal equipment costs, none of the man hours put into the project, and necessitated a physical product to win. A digital-only game like this didn't quite fit the bill, and none of the producers would be paid a single peso. It wouldn't have made much sense to invest the time and effort. It would have limited the scope of what would be a far greater culturally significant product for the entire country. Still, if there's one thing that competition contributed to this story, it was the idea, it was the call.

With a smirk hanging from the corner of his mouth, Rico recalled during our interview that even if they'd never even heard of contest X, the idea still would have somehow manifested in Edgar because of his personal connection with the Tarahumara. A devout veteran member of the Association of Mexican Scouts, Edgar spent a number of years camping out in the deserts and mountains among the famed runners, watching, learning, and respecting their influence on his country and community. In one particular aside, Edgar recounted his astonishment at finding out that the Tarahumara don't have a word for ownership, since they view everything as belonging to everyone. They use the word "kórima" when asking for money on the street. The word however does not mean, "give me" or "help," but rather is a rough variation of the word, "share." He recalled, "That, for me, was a mindfuck. They can't even own stuff in their language and here we are thinking that they're trying to mooch off of our system." In other words, the Tarahumara view this sharing of money, not as an act of charity that merits a please and thank you, but a solemn duty and obligation of mankind unto one another. This imbued in Edgar a profound admiration for the dark-skinned, vibrantly dressed "light footed ones." So Rico was probably right about la pregunta, the question that started all of this. It would have made itself known eventually, one way or another. But as it stood, it was only an ambiguous concept at best, with no traction or backing to speak of.