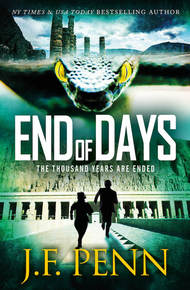 J.F.Penn is the Award-nominated, New York Times and USA Today bestselling author of the ARKANE action adventure thrillers, Mapwalker fantasy adventures, and the Brooke & Daniel psychological thrillers as well as other stories. Her books weave together ancient artifacts, relics of power, international locations and adventure with an edge of the supernatural. Joanna lives in Bath, England and enjoys a nice G&T.

End of Days by J.F. Penn

A buried sarcophagus locked by seven seals. A prophecy that heralds the End of Days ...

A marble tablet found in the ruins of Babylon warns of the resurrection of a banished serpent in the final days. A sarcophagus is discovered in the deepest ocean, locked by seven seals scattered throughout the ancient world.

As the Brotherhood of the Serpent race to find the seals before a rare lunar eclipse over the heart of Jerusalem, ARKANE agents Morgan Sierra and Jake Timber battle to find them first.

But this time, evil threatens to destroy all that Morgan loves and she must wrestle an apocalyptic foe as well as fighting to conquer her own fears.

In a fast-paced adventure from the ruins of Iraq to the snake-handling churches of the Appalachian Mountains, from archaeological digs in Israel to the tombs of Egypt, Morgan and Jake must find the seven seals and stop the resurrection of an evil as old as mankind. An evil that will usher in the End of Days.

End of Days is Book 9 in the ARKANE action adventure thriller series, but can be read as a stand-alone story.

It was dark when Massoud went back to the tomb. The moon was high and silver light glinted on the sands of Babylon, like the edge of a knife before it lodged in the heart of its prey. The sound of the camp filtered across the dunes, the crackling of fire and the voices of men trying to forget what they had seen in the light of day. Their tales of bravado steeled them to face another dawn.

But Massoud could not forget.

He clutched his tool bag tighter and scrambled across the ruins towards the edge of the excavations. Before the war, Saddam Hussein had been rebuilding the ancient city and much had been renewed. The tyrant had remounted the Lion of Babylon, a black rock sculpture over 2600 years old, and carved his own name into bricks alongside that of the ancient king, Nebuchadnezzar. For the glory of Iraq, he had said.

But now Saddam was dead and gone. Iraq was broken by war and crushed under the feet of fundamentalists, fighting for the scraps of what remained. This ancient city had been pounded by mortar and bulldozed by western soldiers, grinding what was left of proud Babylon into the dust of the desert. Massoud shook his head. It was all madness, but for now at least, there was good money to be made digging for archaeologists who wanted to make their names in the desert once more.

And there was a way to make more than just the daily cash in hand.

It was dangerous but it was worth the risk. There were those who would pay handsomely for a piece of ancient Babylon if it could be smuggled out, and he had glimpsed something earlier today at the very edge of his patch. If he could just get it out then his family would not go hungry this winter and his daughter would have her medicine.

A sound came from up ahead. A scuff of boots on stone and the hacking cough of a night watchman.

Massoud froze and ducked down behind a rock. If he was found here at this time of night, he could be beaten … or worse. His heart pounded and his tongue stuck to the roof of his dry mouth.

But then the clouds shifted over the moon and darkness hid him as the guard passed only meters away. Massoud scurried to the tomb, clambering over the remains of the military base. He reached the very edge of the dig where they excavated part of the city that had not been explored before, revealing treasures unseen for millennia, a glimpse of its great past. Babylon had once been the largest city in the world, a hub of commerce and art and the pinnacle of civilization. Massoud smiled and shook his head. How the mighty had fallen indeed. A lesson that the Americans would learn some day, as the British and every other empire learned before them. Man was not built to last and days of glory passed quickly in the blink of history. All that mattered were the people you loved in this lifetime, and that was why he was here now.

He made it to the tomb and crouched at the edge of the pit that led to the entrance. His fingers dug into the red dirt and he hesitated as he felt a shadow at his back. He turned his head quickly.

There was no one there.

He shivered, then took a deep breath, steeling himself before clambering down into the pit. He pushed aside the wooden barrier and crawled within. He couldn't risk the torch yet, not this close to the entrance so he scrabbled in the dark, feeling his way.

Massoud breathed in the air of the tomb. He had dug at many ruins in the deserts of Iraq and he knew the smell of a ruined city. This one was not like the others. Where before he had smelled only the dust of the long dead, here he could smell the earth, freshly turned, as if something was alive down here.

As if the city could spring awake again.

He crawled into the darkness and felt the shadow of a presence, slipping along behind him in the dirt. A whisper in the dark.

The crackle of dry skin rasping across sand.

Sweat broke out on his brow but he kept going. He couldn't turn his head in the narrow tunnel and he knew he would see nothing anyway. Perhaps it was a djinn of the desert, a demon of this cursed city. But there were so many demons in Iraq now and Massoud was more afraid of the human kind than the ethereal. The extremists had taken his cousin away one night and his body had never been found. They had beaten his old father in the market when all he had done was play music at his stall. Yes, the demons in human form that stalked the country now were surely worse than anything under the sands. Massoud crawled on.

At last he made it to the dogleg in the tunnel, out of direct sight of the entrance. He turned on his head-torch. The dull yellow light drove away the shadows and finally he crawled into the tomb itself. Lamplight flickered across rough-hewn walls, revealing a mosaic in bright colors, undimmed by buried years. It was both magnificent and terrible, the image searing itself on his memory. A massive serpent undulated across a map of the known world, its mouth gaping to swallow a bound woman. Its hooked fangs pierced the body of a screaming sacrifice while its huge coils wrapped around countless other dead. Massoud couldn't read the cuneiform text below the serpent, but he had been in enough tombs to know that it was a warning.

When the archaeologists had opened the tomb a few days ago, they had found myriad skeletons of long-dead snakes amongst human bones, evidence of sacrifice to this demon serpent. Massoud shivered to think of being left down here in the dark with hissing death. A primeval terror, especially for a desert people.

Suddenly, he heard a slither in the dark. Something moved at the edge of the torchlight, just outside the warm glow.

Massoud jerked his head around.

Were there still snakes down here?

Stop being a fool, he chastised himself. The faster this is done, the faster you can get out of here and turn this old stone into a fortune.

He turned back to the wall. A black stone slab lay at the corner of the mosaic, carved with the giant serpent on a smaller scale against an inlaid pattern of stars. Cuneiform text wound around it, disappearing into the rock beyond. He couldn't excise the whole slab, but it was still a priceless piece of art that was also small enough for him to smuggle out.

He pulled his mason's hammer and chisel from his tool belt and bent to place the blade carefully behind the stone slab. The metallic tapping obscured the rustle of snake skin from behind him in the shadows. The sound echoed down into the depths of the earth, calling to the darkness to rise again.