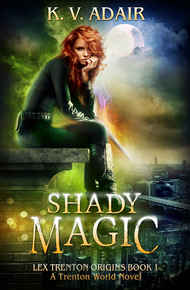 K.V. Adair is the pseudonym for the husband and wife writing force behind the urban fantasy mystery series Trenton Investigations and the fantasy romance series Her Fae Princes.

K., born and raised in frosty Minnesota, is Team Star Wars Forever, while V., used to the sweltering summers in Georgia, is a Trekkie for life. Having met and fallen in love in the MMORPG World of Warcraft, the duo spends their free time destroying foes together online and dominating each other across the kitchen table with only a game board between them.

They live in the frigid north with two supervillains in training and two cats aligned with the dark side.

The mission: Find a missing half-angel teen before he ends up in a body bag.

The complication: Big dudes with bigger weapons and even bigger egos.

My only resources: A knack for getting into trouble. A cocky unwanted side-kick. And a magical Roman Gladius short sword named Gladys.

Telling a girl she has to stay in the car and study while her brother and his bestie hunt down a swindling frog demon is like expecting a four-year-old to eat her broccoli while you eat a giant slice of chocolate cake.

Don't be surprised when she lunges across the table and snatches it from your lips.

Just as Damian shouldn't have been when I flew out the car at first sight of the demon ribbiting out the back door of the bustling demon-run casino.

Being lookout was only one part of the job my brother had given me. The other was to stay in the car and finish my essay. Oh, and under no circumstance leave said car and chase after the deadly demon.

I took the time to thumb send the prewritten text letting my brother know Mr. Demon Frog was making his getaway.

The biting winds of February cut my cheeks and brought tears to my eyes, blurring my vision. I only had an insulated parka for protection. I needed to remember to put on a hat, mittens, and scarf next time I wanted to chase a bad guy in the middle of a Minnesotan winter.

The stench of swamp and mold hit my nose. It was times like these I hated my enhanced sense of smell. I gagged. Even if I were blind and deaf, I'd be able to follow this guy just from the stench.

My sneakers slipped on the black ice patches coating the parking lot. I thanked my demon reflexes I remained on my feet and didn't land on my ass.

They should have put down more salt. Wouldn't want a pesky lawsuit or something. Demons were notoriously spiteful.

Details about the mark became clearer as I got closer. He wore a tattered jacket that looked like it belonged on a homeless guy and baggy pants to hide his huge frog-like legs. His arms hung down to his knees, and his feet were so wide it looked like he wore clown shoes.

He glanced over his shoulder, beady black eyes bugging out at how much I'd gained in just a few seconds. His breath misted before him in gentle white puffs.

With a quick running crouch, his powerful legs launched him high into the air. He landed farther with each leap as his feet hit snow, hopping straight for the tree-line in the distance.

Probably hoped he'd lose me in the dense thicket. It was hard to see through even with the leaves gone.

I smiled. If it wasn't for the fact I could smell him from 30 feet away, he might have.

I pushed my legs to go faster, calves burning and arms pumping. A five-mile run every morning did wonders for my long-term stamina but did nothing to give me the burst of speed I needed to catch the fat frog.

You had to do sprints for that. I hated sprints.

He broke the tree-line, and the impenetrable darkness swallowed him. My job had just got a hell of a lot more dangerous.

He could only be going to the portal leading to the demon domain, Sheol. If he made it there before I stopped him, he'd be gone. I wasn't dumb enough to follow into hell.

My pace slowed as I followed him into the foreboding forest.

Snow crunched under my shoes as I stalked into the woods following his rather pungent scent. The cool air filled my lungs, exhilarating even though it hurt to breathe. The snow was packed tighter here, with a narrow path the demons used to get from the waypoint to the casino.

Where each step sank deeper into the snow, his scent was more pronounced from the other demons, and the stride was farther apart like someone had leaped with powerful fervor.

My eyes adjusted to the lack of light. I didn't have enhanced sight, so I depended on the minimal shafts of moonlight penetrating the canopy.

I couldn't see very far in front of me, but I didn't need to in order to follow his footsteps.

The trail of his hops swerved into the thicker woods where the snow was fresh and untouched except for his imprints.

I clamored through the snow into a ten-by-ten clearing and stopped. Moonlight illuminated the empty clearing. There were no more footprints to follow. I took a second to put the pieces together.

I smelled him before he smashed into my back from above, knocking me flat on my face. He bounced off with another lurch of his powerful thighs, landing in front of me, and crouched down.

I was pretty sure most of that was gibberish.

I spat globs of snow from my bleeding mouth and pulled myself to standing. "Sorry, I don't speak frog."

I must have offended him because he roared and charged toward me. Have you ever heard a frog roar? It's unsettling.

This time I was ready for him. I stepped to the side once he got close and planted my boot on his back with a precise side-kick.

It was his turn to eat snow.

He wasn't down for long though. He pushed himself up with wart-covered hands. Not toad-like warts, but rather humanish, the kind indicating you had skin cancer.

My advantage was quickly diminishing. I squashed the back of his neck with a devastating stomp, hoping to break it and paralyze the asshole.

No such luck. Demons are tough sons of bitches.

I tried to strike again, but he twisted and caught my ankle. He gripped it and flung me headfirst into a tree.

I flew and landed awkwardly on my shoulder. Thank the gods his aim was shit, or he would've cracked my skull. Pain raced down my arm. It wasn't broken, thank the gods. I was hardier than a human but not as strong as Kermit.

It was time to take the kid gloves off.

I launched myself back onto my feet before he squished me like a bug.

He smiled wide, black pus oozing from his lips.

I needed to be careful. This guy had more poison running through his veins than a junkie.

He roared as he charged like a rhino-amphibian hybrid. It would have been comical if I wasn't in imminent danger of being crushed.

I dodged to the right. He missed and took several steps before stopping to course-correct. I danced away from his next charge.

He was fast, but I had conditioned my body to react, requiring no thinking to play the defense.

And defense was my only option. I had no weapons on me unless you counted the fancy pen in my pocket. Who needed weapons when ordered to stay in the car?

My job wasn't to win, though, just to survive long enough for my brother and his partner to find us. While I didn't know the details of the case—Damian never deigned to inform me—he had been adamant they needed the asshole alive.

Otherwise, no payday. And we really needed a payday. It was a bad financial move to put another month of groceries on a credit card we could barely afford to pay the minimum on.

But a girl and her brother needed to eat. If I kept the demon distracted long enough, and away from the damn portal, maybe Damian would take us out for a nice steak dinner.

Kermit kept charging me, coming from different angles. Thankfully, the snow wasn't deep and didn't hinder my movements. I continued to spin out of the way, changing the directions to keep from getting bored.

It wasn't taxing. I could keep doing it all night if I had to. Clearly, he wasn't someone who learned from his mistakes.

He halted, snarling at me like he was rabid.

Guess I spoke too soon.

I dropped into a front stance, ready to unleash some powerful kicks. Playing defense was boring anyhow.

We stared at each other. I taunted him, thinking I could provoke him back into his reckless charge.

"What would your friends think seeing you get your ass kicked by a half-breed?" I asked with a sardonic grin.

Faster than I could take a second breath, his slimy tongue shot from his mouth and extended the ten feet between us. It wrapped around my throat.

Cool saliva rolled down my neck, seeping down by parka and settling between my breasts.

His tongue flexed, tightening around my throat and cutting off my air supply. I had to admit; it was impressive. I had not seen that coming.

I clawed at the meaty tongue. My fingers stuck to the damn thing. My heartbeat pounded in my ears like a racehorse, and my eyes burned as black spots floated in and out of my vision.

This felt like the end. I would be choked to death by a tongue.

I hoped they wouldn't put that on my tombstone.