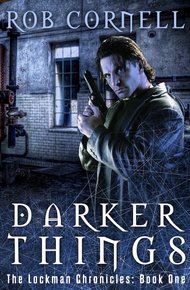 Whether it's a covert-ops team of vampire assassins or a greedy dragon who lives under Detroit's MGM Grand Casino, most of Rob Cornell's stories feature some element of the dark and fantastic. He has written over a dozen published novels, including two urban fantasy sagas—The Lockman Chronicles and the Unturned series. He also penned the fifth installment in the Linger series of supernatural thrillers published by Braun Haus Media, writing as Edward Fallon. A native of the Detroit area, he spent a handful of years living in both Los Angeles and Chicago before returning to the Midwest, and currently lives with his family in Southeast Michigan.

Darker Things - The Lockman Chronicles: Book One by Rob Cornell

It started with a dead name… Craig Lockman.

No one had called him that in fifteen years. Not since his days at the Agency. Not since he was trained to kill monsters that were supposed to exist only in nightmares. Yet the teenage girl on his doorstep not only knows his real name, she claims she's his daughter.

Before Lockman can learn how the girl found him, he's attacked by a black-ops team of assassins. But these aren't ordinary killers—they're heavily armed vampires sent by his most hated enemy.

Forced on the run, Lockman protects his daughter from an onslaught of dark creatures while searching for who betrayed him and why. The investigation leads him to Detroit, where he unwittingly sets a plan into motion that could trigger a paranormal apocalypse and cost him his soul.

The girl with the dyed black hair and the hoop through her eyebrow stared up at him, shoulders cocked as if one of them bore all the world's despair. She couldn't have been older than fifteen, but he would have guessed closer to thirteen—which made her awfully young to be standing by herself on his doorstep in the kind of neighborhood he lived in.

All of this could have ended—would have ended with a quick, Shoo, get out of here, this is no place for a kid your age. Except for the name. A name he hadn't heard for as long as this girl had probably been alive.

"Are you Craig Lockman?"

His heartbeat immediately went into twelfth gear. But he didn't show anything on his face except a mild curiosity. "I'm sorry? Who?"

"Craig Lockman. I'm looking for him and I was told he lived here."

He looked over his shoulder at the modest living room. The worn leather loveseat with cat scratches on one arm from its previous owner. The handmade wood coffee table he threw together living in the last shithole—a project to keep his mind off of how much life could take a turn...and how much you could lose.

That's when Lockman got the first buzz of fear coming off of her. She had sensed she'd walked into something she might not walk out of.

Lockman wondered if he could actually permanently silence a thirteen year-old girl. He hadn't had a thought like that in a long time. He didn't like facing such a decision now.

"Never heard of him," Lockman said. He smiled, made it look as good and innocent as he knew how. He hadn't smiled much in the past fifteen years except when customers came to the counter at the car rental place he worked at. He figured those smiles didn't really count.

"You're sure? Because he seemed pretty positive this was the right address."

Again, that buzz. A vibration off her body that she'd slipped up and something venomous might sneak up and bite her. For a thirteen year-old, she had good instincts. But she wasn't a very good liar.

"My friend," she said after a second's hesitation.

"I'm going to ask you this one more time. Who sent you?"

She scrunched up her face. "Sent me? No one. I came here on my own."

Did she really expect him to believe a teenage girl had compromised him all on her own?

She threw up a hand, dismissive. "Forget it. Obviously the guy was wrong." She started to turn, her hand coming down from her wave.

Lockman grabbed that hand by the wrist and yanked. The next was easy, and her age had nothing to do with it. She'd let her guard down the second she had dismissed him. Meant her center of gravity was his to manipulate. He twisted her hand with an improvised bit of Aikido. He had her inside and the door closed in less than two seconds.

When he released her wrist she backed away, shaking off the pain in her hand even though he had barely used any force. Hadn't needed to. The sudden move had thrown her equilibrium off, both literally and mentally. Her next move should have been a sprint for the back, get out through the sliding glass door. Instead, she hesitated, more concerned with her hand and what the hell was going on than any kind of survival.

"That remains to be seen."

"I could have you unconscious and under total control within seconds. You aren't even smart enough to run for the back door."

She glanced over her shoulder as if she was considering it.

"It's too late to get away, so you might as well cooperate."

She gave him a practiced teenage look, as if she had lived through most her teen years already and had the routine down pat. "I could run. I'm fast."

"You don't know anything about me, do you?"

Her brow creased. For a second she dropped all the affectations of a teenager. "Are you Craig Lockman or not?"

"Who gave you that name?"

Lockman's chest tightened. The hairs on the back of his neck prickled. "Did Dolan send you? Is he here right now?"

"Look, I'm sorry if I got the wrong house. I'm just looking for Craig Lockman. I don't want any trouble."

She covered her face with her hands and sighed against her palms, making almost a whistling sound. "This isn't going anything like I expected."

"You should not know that name."

"You didn't have to. It's weird. It's like I somehow learned to read your face by watching my own."

That was it. That strange recognition he'd had earlier. She had described the feeling perfectly. He'd learned to read her face by studying his own.

Then a possibility started to piece together and the screws tightened. Despite every part of him that simultaneously wanted to deny and celebrate the idea the hairs on his arms stood on end.

Whatever the truth, this girl's presence meant nothing good. And just as he realized this, the automatic gunfire chopped a line across the front of his house.