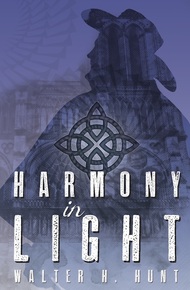 In 1880s Paris, a doctor encounters a statuette that can drive men mad, secret societies, and a bridge between worlds that threatens disastrous consequences. Throughout, he is assisted and opposed by historical figures such as Charlie Dickens, the son living in his late father's shadow, a young Sigmund Freud and the ghost of the Marquis de Sade.

The Sound of Rain

It was raining: not the gentle shower on some pastoral meadow, but the cold, miserable sort that visited London on an irregular basis, turning the dirty streets into muddy ones and, when accompanied by wind blowing through the spaces between buildings, defying even the most sturdy umbrellas and warmest greatcoats.

His father had written about rain: it was tears upon the dust of earth, he'd said in Great Expectations, in one of his most maudlin moments. Charley had never liked that book, which was altogether overfull with maudlin moments.

It was like everything else that had to do with his famous parent: admiration mixed with annoyance. Time, and the ability to finally step out of Charles Dickens' enormous and all-encompassing shadow, had dulled that but not completely removed it.

When he alighted from the cab, Robert Grant was waiting for him, as sturdy an umbrella as was sold in London held above his head, indifferent to the wind and rain. They walked up the three steps and knocked on the main door of the Regent Street house before them; when there was no answer, Grant shrugged and turned the door-handle, finding it open. They stepped inside, out of the rain.

"It's quiet," Charley Dickens said, as they closed the outer door.

"The rain makes a lot of noise," Grant noted. "If that's what you mean."

"It's not. It's quiet on another level."

Charley removed his Oxford glasses and wiped them on his sleeve, then perched them on his nose; they removed their hats, and he spent a moment gazing at himself in an ornate wall-mirror with a tarnished frame. The gaslights had been lit; even absent a greeting at the door, they were expected.

The air in the apartment was still, as if it had not been disturbed in some time. They went down the hall and through a doorway into a spacious drawing room. The furniture was all draped and covered; four portraits hung over the mantel, each draped in black. The third was of his father: a rather generous depiction—sat for when he was at his peak, the greatest writer of the English language, beloved by millions—not at all like Charley's last recollection of him.

One man stood in the room, his back to Charley and Grant, looking out one of the broad windows at the rain pelting down on London. At their entry, he turned to face them.

"Dickens." Reverend William Davey nodded. "Good of you to come."

Davey was an elderly man, dressed in the somber attire of a country vicar; he was the sort to whom no one would give a second thought while passing him on the street.

Charley Dickens knew better. He could feel Davey's power. In the absence of any other mesmeric sensation—the house was seemingly well-insulated from that—he felt it even from across the large room.

"An interesting choice of venue," Charley said, trying to affect an air of indifference. He pulled aside a cover and perched on one end of a couch; Grant remained standing. "This looks as if it was furnished at the time of the Queen's coronation."

"Vernon had antiquated tastes. But this was our grand meeting place once."

"No," Davey said. "I believe you have not. Your father was here many times." He gestured toward the black-draped portraits.

"My father was not one of your admirers, Reverend," Dickens said.

"We were both part of the same society. But that is neither here nor there. In any case, I did not ask you to come here to reminisce, something that I suspect is of little interest to either of us."

"Why did you invite me? Am I here to receive some of your well-known discipline for some sin I have committed against our … society?"

"I needed to speak to you. Privately."

"Indeed." Charley made a minute adjustment to his glasses. "Then say on."

"Privately," Davey repeated, glancing pointedly at Grant, who had remained standing, silent, through the entire exchange.

"He stays. Or I go. You know that I repose complete trust in Mr. Grant."

"This does not concern him, and you do not need a bodyguard, Dickens. I do not intend to do you any harm."

Charley Dickens turned and looked at Grant, who raised one eyebrow very slightly.

"In any case," Davey said, "if I did intend to do you harm, his skills would do you no good. As for his talents, I think they can be safely ignored as well."

"You are the soul of subtlety and propriety as always," Charley said. "I know my father always took note of your capacity for understatement."

The comments hung in the still air for several seconds; then Davey shrugged. "Very well. But I will expect you to be responsible for his circumspection as well as your own."

"I have a task for you," Davey said. "I need for you to retrieve something for me."

"As it happens. What leads you to that conclusion?"

"If this item was somewhere within our green and pleasant land, you would simply go get it yourself. I assume you are hesitant to leave your domain … because of her."

"She is not the issue," Davey replied. "I can handle her, just as I always have. Still, her husband's funeral is a convenient occasion to keep her out of London—and thus an excellent time for us to have this little chat."

"I would prefer it. Her involvement would introduce … complications that I do not desire. I need you to go to Paris, locate something, retrieve it, and return it to me."

"I see. And the nature of this something?"

Davey picked up something from a side table and walked across the room to hand it to Charley. It was a calotype depicting a small statue of a dancing girl, one hand raised above her head. He examined the dark figure on the paper photograph.

"That's Esdaile's treasure, isn't it? The one he was to have brought back from India."

"Yes," Davey said. "There seems little point in dissembling, though I confess that I do not understand how you are aware of it."

"Everyone in the Committee knows about it, Reverend," Charley said, allowing himself a tight smile. "Just as we all knew the prohibition against contacting Esdaile's widow. I don't know why it's important, but it clearly is; I thought I'd heard that it had been lost."

Davey looked slightly annoyed, but simply said, "It was. But rumors of it have reached me over the last quarter century. It was in Mexico, and in Bulgaria, and most recently in Equatoria. A member of the Committee had possession of it."

"In Equatoria? The Soudan? You mean Gordon?"

"Yes. It found its way to General Gordon at Khartoum, but he apparently placed it into the custody of a soldier named Harding before the city was taken by the Mahdi. That individual has found his way to Paris, with the statue still in his possession.

"I need you to find him, procure it, and return it to me. I suspect that the task is well within the compass of your ability." Davey glanced from Charley to Grant and back.

"Why? Simply out of spite? This has remained just beyond my grasp for nearly four decades, and I am determined to have it. Much as my anger might seek to govern me, I would not want to have to compel you, Dickens. I would prefer to reward you instead."

"Knowledge. I credit you with some skill in the mesmeric arts; you had a good teacher. But there are certain aspects of the discipline that you do not possess, and which I suspect you would find … attractive."

"And all I have to do is to retrieve this bauble." He turned the calotype in his hands; the picture caught the daylight, but it seemed to Charley that it glowed with an inner light of its own.

"Essentially, yes. And at once. The statue has an annoying propensity to vanish."

"You speak of it as if it is a living thing and not some ancient piece of primitive art."

"I do not choose my words idly."

"I'm sure you do not. I have one or two things to attend to, but I can leave within a fortnight."

"I would prefer that it be addressed sooner than that," Davey said. "But I am content to have you handle this willingly. But do not delay; I am watching this matter carefully."

"I assume that she is watching as well and would take notice if the matter comes to her attention."

"Mrs. Daniel is even more closely tied to this domain than I am, Dickens. But your point is taken: I do not think she knows of the statue's reappearance, but the fact will not remain concealed from her for long. Thus, I urge alacrity."

"An old woman confined to a wheeled chair? Why, pray tell?"

"Well," Davey said, "you should still be afraid of me; and I am no more than a mesmerist. She made her bargain many years ago, and that wheeled chair is the result. I might show you some mercy, should it ever be necessary. Do not expect the same from Ann Daniel, even now that Richard is dead. She and her allies are not inclined toward that gentle sentiment."

Charley stood. "I will take that under advisement."

"See that you do. And I assume you will give this matter your usual careful attention."

"I can hardly do otherwise, I suppose."

"No," Davey said. "I suppose not." He turned away from his two visitors to look out at the rain, tears upon the dusty earth.