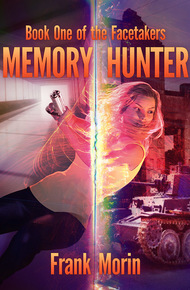 Frank Morin is a storyteller, an outdoor enthusiast, and an eager traveler. He is the author of the epic teen fantasy series, The Petralist. Set in Stone kicks off the series, which is known for its big magic, big adventure, and lots of humor. Frank also writes The Facetakers, fast-action time-travel fantasy thrillers.

When not writing or trying to keep up with his active family, he's often found hiking, camping, Scuba diving, or traveling to research new books. Frank is a member of SFWA. Find out more about his novels and his shorter fiction, or join his readers group at: www.frankmorin.org

Sarah toppled a billion dollar body-renting industry to rescue her body from the auction block. Dozens of others weren't so lucky.

The facetakers with their soul-transferring powers might hold the key to redemption. Tomas holds the key to finding them. Sarah wants answers, and he wants her. He alone can introduce her to the shadowy world of facetakers and soul-powered runes.

Bad timing. The centuries-long war between the facetakers and their rune-enhanced enemies escalates dramatically with a new battlefield: history itself.

This action-packed thriller spans the globe, fueled by arcane powers, body-swapping near-immortals, and secrets buried in the rubble of WWII Berlin. The future of everyone Sarah loves hangs in the balance as she plunges into the conflict to become the memory hunter.

Tomas rushed back in through the door. Sarah had expected him to take a lot longer.

As soon as he spotted her he called, "Grab your bag. Hurry."

She chased him into the kitchen where he pulled a keyboard out of a recessed cupboard and began typing furiously, his face intent as he scanned the security monitors.

"What's wrong? Did the facetakers figure out it was you?"

"No. Never made it to the office. I spotted a tail and circled back around."

"You led them here?"

"I think I lost them, but I wanted to make sure you were safe." He gripped her hand tight. "If they knew where to start tailing me, they might've come for you too."

"Most likely. We have to hurry. This location may be compromised."

That was a terrifying thought, confirming Sarah's fears from the night before. She rushed to her room to grab up her belongings and returned to the kitchen four minutes later with everything packed.

Tomas was there, a couple of bags at his feet as he again focused on the outside monitors. One bag was his backpack, and the other was a large black duffel packed with weapons, cash and a bunch of other gear. The sight of it drove home just how serious he considered the risk.

"What about Dalal and—"

A loud beep cut her off and a flashing light appeared on his monitor.

She rushed into the living room and snatched it up. Tomas shoved it into his duffel. The monitor showed a view of the enclosed courtyard just outside the front door. A group of tough-looking men were entering the courtyard, pulling out weapons. She'd spent enough time at shooting ranges to recognize automatic rifles with suppressors.

Tomas typed a command and slapped the Enter key. On the screen, orange clouds of smoke suddenly billowed into the courtyard from three sides, enveloping the men.

"If they're not enhanced, that'll stop them," he said.

"But they're probably enhanced?"

He nodded and the worry already knotting her stomach spiked to full-blown fear.

Instead of heading for the back door, he led her into the bathroom.

"I don't think hiding in the bathtub is a good idea," she said.

He pushed on the sink. It rolled aside, lower cupboard and all, like it was set on hidden wheels, revealing a dark, narrow stair leading down. He grabbed a pair of flashlights attached to the wall, handed one to her, and led the way down.

The sink rolled back into place behind them.

"What is this place?"

They followed the stairs down quite a ways to a long tunnel lined with stone. He stopped at a series of lockers recessed into the wall and punched in a combination. One of the doors popped open and he extracted a shotgun that was so short it had to be illegal. He hefted it and pulled a bandoleer of extra shells over one shoulder.

"Ever use one of these?"

"Not that model, but I've shot shotguns. I don't like the recoil."

It probably kicked like a mule. She was relieved she wouldn't be the one carrying it. Tomas extracted a pistol from the locker and handed it to her along with three spare magazines and a paddle holster to clip to her belt. "Forty-five. Can you handle it?"

"If I need to. Have any Tasers?" She preferred something non-lethal, but took the handgun when he shook his head. She was comfortable with guns, but had never dreamed of actually needing to shoot anyone. With the weight of the gun dragging at her belt, she prayed they could escape unseen.

A muffled wump sounded behind and above them. She felt it through her shoes as much as her ears, and dust drifted down from the ceiling.

"They're enhanced. Breached the main door. The apartment is set with explosive charges. Hopefully that'll slow them long enough for us to get away."

They'd been sleeping surrounded by explosives? No wonder he had a hard time relaxing.

The fact that explosives were only enough to slow their pursuers ratcheted her fear higher. She clutched Tomas' hand as he led her along the dim passage by the light of their flashlights. Thankfully it only took another minute to reach the far end of the tunnel that ended in another staircase. A steel door blocked the top, and Tomas typed a code in a keypad set in the wall. A small terminal glowed to life, showing both sides of a narrow alley.

He pushed open the door and led the way into the alley, shotgun at the ready. Sarah followed close behind, carrying the heavy bags. They slipped along the stifling alley that reeked of heater exhaust and rotting trash.

Sarah tried not to pant, but her heart was racing and her hands felt clammy on the straps of the bags. She silently urged Tomas to hurry.

Just before they reached the end of the alley, four men rushed around the corner in front of Tomas. The two in front skidded to a halt and raised carbines, but their companions collided with them and threw off their aim. Bullets tore chunks out of the wall near Sarah's head.

They were carrying AK-47s with the stocks and barrels chopped to illegal lengths, and suppressors screwed onto the barrels. The rapid-fire reports still sounded terribly loud so close and in the confines of the alley.

He fired his stubby shotgun so fast the gun made a continuous roar that pounded against Sarah's ears so hard she shrieked, dropped the bags, and clamped hands over her ears. The hail of buckshot blasted the first two attackers into their companions. Even as the second pair tried to return fire, Tomas flicked a little lever on the shotgun and resumed firing until all four men lay sprawled and bloody on the ground.

Sarah stared at the grisly mess as Tomas kicked the men over and pulled up their shirts. The men all wore slender packs, which he yanked off and tossed down the alley.

"No," he said. "They're occans, so their fueling souls would've already started healing them. Now they'll stay out for a while."

Sarah snatched up the fallen bags while Tomas paused just long enough to shove more shells into the twin loading tubes at the base of the stubby shotgun. Then he led the way around the corner into the backyard, gun held low and ready.

A huge fist knocked the gun aside and a second one smashed into Tomas' face. The shotgun fired wildly into the back fence as it flew out of his hands. He tumbled to the ground, knocked right off his feet.

A giant of a man came around the corner and kicked Tomas in the ribs before he could rise. Tomas managed to get his legs up to block, but the blow sent him rolling several feet.

Before the huge attacker could close on him, Tomas lunged to his feet, a long knife in his hand.

The big fighter drew his own knife. It was long, with a serrated upper edge.

Sarah shot him in the back.

He staggered and she kept firing, her arms locked into the shooting position she'd practiced so many times. She screamed as she fired, hating the sight of blood spurting from the man's back as she gunned him down.

The slide of her gun locked back, empty. She hadn't realized she'd fired so many times. While she fumbled for another magazine, Tomas kicked the huge attacker to the ground and removed his soul pack. When the man groped for his leg, Tomas kicked him in the head a couple of times.

"That was amazing," he said when he turned to her.

Sarah managed to holster her pistol without dropping it, despite the shaking of her hands. She felt sick by what she'd done. Knowing she hadn't killed him helped, but she couldn't believe she just did that.

"Aren't you full of surprises?" The familiar voice spun her around.

Mai Luan stood at the corner of the alley, flanked by four more armed heka.