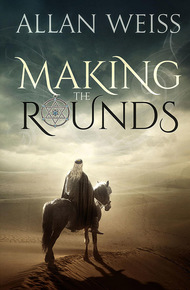 Allan Weiss was born in Montreal, Canada and currently lives in Toronto, Canada where he teaches English and Humanities at York University. He has published over two dozen short stories, both mainstream and genre, in various periodicals and anthologies, including Fiddlehead, Prairie Fire, Windsor Review, On Spec, and Tesseracts 4, 7, and 9.

He earned his B.A. (1979) and M.A. (1980) in English from Concordia University and received his Ph.D. from the University of Toronto in 1985. As a scholar, he specializes in Canadian fiction and fantastic literature, and has published numerous articles on these topics and on the short story. He has also delivered papers at conferences in various countries in Europe and Asia as well as North America. He is the Chair of the Academic Conference on Canadian Science Fiction and Fantasy, which is held every two years in Toronto, and edited a volume of proceedings of that conference, The Canadian Fantastic in Focus (McFarland, 2014).

Making the Rounds by Allan Weiss

...when a word decides to get up and leave your holy book?

...when you're a mayor and your city is literally crumbling around you?

...when the evil Haman, villain of the Purim story, seems to have arisen from the dead to terrorize your town?

Eliezer ben-Avraham, wizard, Kabbalist, and kvetch, not only can but must help. Because he poked around in areas of forbidden knowledge, he is obliged to wander the world and use the powers he gained to perform good deeds—mitzvot—for anybody who asks, no matter how bizarre the task. Ably assisted by his trusty but cynical steed, Melech, Eliezer does what he can, although transforming into a bird and flying around is difficult when you have arthritis in your shoulder.

Humourous, philosophical, and very weird, Eliezer's adventures as he makes his rounds demonstrate how important it is to be generous with your gifts, even to the craziest goyim.

IT WAS A typical late afternoon in the desert, and Eliezer nearly fell asleep in his saddle after a day of seeing nothing but the featureless horizon shimmering around him. For hours, there'd been no sign of a village, or distant oasis, or caravan stretched along the brown sands. Even Melech seemed ready to doze as he lethargically planted his hooves on the packed sand.

So, did every day have to be interesting? Was God an entertainer?

As it was only four days after the summer solstice, the evening came slowly. Eliezer loved the dusk, because every moment promised deeper and richer night that revealed more and more of the five-pointed stars of this world. It was God Who made the stars shine… but who was responsible for the black spot that now suddenly appeared on the western horizon? The spot grew, gained definition, until he discerned a horseman leading a band of pedestrians, the entire crowd heading straight for him. He halted Melech and pulled himself erect, moving only to stroke his beard. It was never a mistake to adopt an appropriately intimidating appearance for such encounters.

The horseman, he now saw, was swathed in fine white and gray robes, his head wrapped in a kaffiyeh that flapped in the wind. "A big shot," Eliezer suggested to Melech. Melech nodded. "Might be trouble, too," Eliezer added, and shrugged: what else could a big shot be?

"Greetings!" the leader called in a Gentile tongue; his little troupe held tightly together behind him as they nervously watched Eliezer— maybe afraid he'd impulsively turn them into birds or something. "I'm sorry," the man continued as he halted his horse; "shalom!"

Eliezer maintained his silence, which never failed to impress. He appreciated the unnecessary shift in language, but knew it wouldn't last. The goyim never bothered to learn more than a polite word or two of the language of the Book.

After a minute the horseman tried again. "Can you understand me? I don't know your tongue very well!"

Eliezer nodded. Melech said, Speak up already; the people look scared silly. To come to him like this, out in the middle of the desert… They must be desperate, Melech suggested, stating the obvious. Eliezer waited for the usual comment about the irrationality of humans, but the horse preferred to be uncharacteristically restrained.

Using one hand to hold down the bottom of his kaffiyeh while awkwardly clutching his reins with the other, the horseman said, "Are you Eliezer Ben-Avraham, the wizard we have heard so much about?" His entourage peeked around, above, and under his black steed, but avoided getting too near the animal, as if it were some unEarthly creature.

"I am Kala-Wek, of the rockcity of Al-ayar. We need your services. Can you follow us?"

"Well—" Eliezer said, stretching the word out to an absurd length. For his part, Melech refused to offer an opinion. Some helper he was being! "What is the nature of the task you wish me to perform?"

"Transformation? Something with your herds? You have crops?" In this desert? Not likely. "A good harvest I can try, but I'm not as young as I used to be." That was true; it was also irrelevant; but it often excused him from interfering too much with God's will.

"Please, come with us. The priests will explain."

Melech shook his head in distaste. He hated mysteries, surprises; he was always so cautious… if he had his way they would avoid anything that was even remotely interesting. "I'm sorry," Eliezer said, "but if you can't explain your problem maybe it's not so serious."

"You interrupt me as I do my rounds, and won't even say why? Give me an idea at least."

Most of Kala-Wek's face was hidden by the headdress, but the strain was apparent. "A word is missing," he said at last.