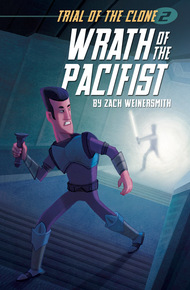 Trial of the Clone 2: Wrath of the Pacifist by Zach Weinersmith

In the first book (SPOILERS), you play a lowly clone who fights his way up to rule an empire. At the end of that book, you can choose to become good or evil. This sequel assumes you turned to good.

The story takes place at the end of your rule as a benevolent sovereign, when the universe is once thrown again into turmoil. It's up to you to save it, but you'll have to navigate your way to supreme power in order to succeed.

If you haven't read the first book, we like to describe the tone as "Douglas Adams but a lot meaner." If you like satire and deadpan humor and space battles, this book is for you.

The story from Trial of the Clone continues in this brand-new gamebook sequel, and we choose the ending in which we’re psyched. – Geoffrey Golden, The Devastator

This book continues from the “good” ending of book 1. If you haven't read book 1 or you need a refresher, read the following section:

You were a lowly clone, kicked around and abused your whole life. Loser that you were, you were enrolled at the Silene Monastery, where the monks work on their martial prowess (and also their keg stands). There, you were told you were a special being with a strangely high count of Booleons—the tiny particles of matter that gives Silene monks power in The Energy.

The President of the United Vassals of the Empire sent you on perilous missions, which you barely survived. Upon your return, he informed you that the Vice President had gone rogue. Your mission was to find and kill him. When you reached the Vice President's space-fortress, he revealed that you in fact had no Silene powers, and your Booleon count was pathetic. In fact, you only survived those perilous missions because the Vice President was secretly there to protect you. The VP explained the whole truth then: The President had found an ancient device that would allow the switch- ing of Booleon counts between individuals. In order to gain greater power, he decided to create a massive program to find a person with an ultra-high Booleon count. The Vice President knew this would make him too powerful, so he ran the program himself, secretly screening for the biggest losers and all the while making it appear as if they were great heroes. After much searching, there was only one other indi- vidual in the universe as unlucky as you—a man named Suicidal Joe. He was cursed with the desire to kill himself but was ALSO cursed never to successfully fulfill that de- sire. However, having witnessed that one time you tried to ask a blind girl out with sign language, the VP was not yet certain which of you was the most pathetic figure.

After you lost in combat to Joe, who was by then only a head in a pan, you were determined to be history's greatest loser. You were sent back to the President, who stepped into the switching machine with you. When the switch happened, the President became pathetic and unattractive. You, gaining his relatively high Booleon count, became intelligent, charismatic, and powerful. Your catchphrases, long hated throughout the multiverse, became witty and charming.

You and the Vice President defeated the President and his guards, and went on to rule the universe as benevolent co-Presidents. But, the story will not end there. Let us begin a new chapter.