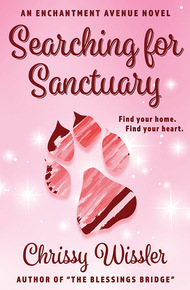 Searching for Sanctuary by Chrissy Wissler

Aisha Faye leans against the hot, chain-link fence of the cage, one of many in her waystation for unwanted, magical creatures. She watches, helplessly, as a tiger once overflowing with magic now lays there unresponsive.

No joy, no spark, but slowly dying... just like all the others.

Across town, in the world of elite witches and wizards, Nate Darkwood watches the same.

Both Aisha and Nate need answers with only way to find them: together.

A novel set in the dazzling world of Enchantment Avenue. Searching for Sanctuary, a story of hope and redemption, love and magic... and all of them, possible.

Aisha leaned against the cage's rusted chain-link fence. The hot surface heated her dark skin, but she ignored it.

The tiger Lanhi lay sprawled and uncaring on her wooden hovel of a house's flat roof. Massive paw hanging off. Not even swinging in the nonexistent breeze. Not the way she used to, like she was batting at some stray hopping-kangaroo mouse that'd wandered in from the southern pen enclosures.

It'd only happened once, not long after Lanhi had arrived, when she'd barely had the will to even eat her food. Aisha hadn't respelled the mouse enclosure lock against hair-thin whisker-picking abilities (the hopping-kangaroo mouse's master having not informed Aisha of their peculiar talents—the same talents that'd gotten them banned from hearth and home and a much nicer, much more expensive Familiar Sanctuary).

But the little adventure of hopping-kangaroo mice had given Lanhi (and the mice) some of their own spark back. Both sides had survived (thank goodness), and while the doors were now safely locked and secure, the spark had held.

Until whatever had made her change, made her revert back to the tiger with barely the will to live.

And yet, even now Lanhi lay on her roof with her paw hanging down as if the memory of the mice was still with her. Still hanging on. Perhaps even a small spark remained for her to be on guard for the next silly hopping-kangaroo mouse foolish enough to come into her domain of faded and tearing circus posters, elephant stands, and flung-about clown noses on the dust-dirt floor of her enclosure.

Even though her paw just hung there. Unmoving. Uncaring.

"Come on, sweetheart. Please." Aisha felt the magic within her gut stir. Slowly, as if reaching out to the tiger…testing and unsure.

She hoped Marcelle had reported wrong. Hoped her magic would prove otherwise, that their dancing Lanhi was fine.

Lanhi ruffed and grumped. A hot puff of air spewed from her massive mouth of teeth and tongue, blowing at the tattered, pale-pink tutu hanging from a skirt hook.

The sparkly sequins, no longer sparkly.

The ruffles wrinkled and limp.

The tutu had been a recent addition. As had the clown noses. Insisted by Lanhi's master, the witch Ghazille.

Fat lot of good that had done Lanhi.

The unrelenting Simi Valley sun beat down on Aisha, the outside cage, the lines and lines of other Familiar cages in her Waystation, barely a narrow, dirt footpath between them. Even the tiniest movement caused a small twister of dust to billow upwards. The dust didn't even spare poor Lanhi, her no longer shimmering, no longer carefully groomed orange-, white-, and black-striped coat and instead, now dull and faded. The Waystation's famous dust coated every surface, made Aisha's skin look a pale tan instead of the dark, sun-kissed skin of her grandfather's people, the Hadzabe tribe.

A tribe she couldn't actually remember.

She needed to focus on Lanhi. Focus on someone she could help.

Sweat trickled down Aisha's forehead. Dripped off her nose. She didn't move. Not even when the salty sweat slid into the corner of her eye.

Any movement, sudden or even slow, could send the tiger Familiar into another set of fits.

It was one of the main reasons Lanhi had been banned from her previous sanctuary. An uncontrollable Familiar was a handful; an unpredictable one, a danger to everyone. The kind of Familiar those high-end Sanctuaries didn't want to help.

Her magic continued to circle. To rise up from her chest, reaching her throat. Still tentative. Unsure. Trying desperately to reach out, to find some connection between Aisha and Lanhi, something that would help her understand—would help the tiger keep wanting to live.

She almost wished Lanhi would have those fits again. Anything to bring the tiger back to her usual spirits. Anything at all to show that she wasn't withering away.

Just like so many of the other retired, abused, and often forgotten Familiars.

Lanhi ruffed again. Blew another a sigh of hot air. Made the tutu's ruffles dance just the slightest, but nothing like the way those ruffles had danced before Lanhi had been sent to the finest Familiar sanctuary in the Northern Hemisphere, Paradise Grove Familiar sanctuary—before, of course, coming to Aisha's barely-holding-together Waystation.

There wasn't even the tiniest bit of excitement behind those hooded orange-gold eyes.

The magic in Aisha's stomach settled into a cold, hard stone.

Not even a stirring remained.

"Damn," Aisha whispered. "Not another one."

Aisha swept off her felt-brimmed cowboy hat. Slapped it against her khaki pants. Dust billowed up and into her nose, tickled it. Right alongside the tang of animals and sweat, rotting meat, and just plain hot-dry Waystation.

She sneezed. Then sneezed again.

Felt a familiar ache for home, a longing to go back to another time. Funny how a sneeze could remind her of the hot summers at her parents' thriving sanctuary in the Serengeti Magical Proper. Back when her life was going just fine and climbing upwards, upwards to where no sky, no magic was the limit.

She slapped the hat back on her head.

She'd never change that clock, though.

This was exactly where she needed to be.

Who she needed to be.

Aisha gave one last look at Lanhi. She'd have to call the witch, Ghazille. Not that the woman would care. Not that any of them did, not after their Familiars wound up in the Waystation, the last stop on their abandoned, unhappy, and too often short lives.

At least for these Familiars.

Not all Familiars led the perfect lives the Enchantment Avenue Council (hell, even that great and powerful High Council) liked to preach from their safe havens of magic and strength. They pretended ignorance when it came to abuse and misuse of Familiars, turning a blind eye especially when it came to the highest among them.

But Aisha knew better, and so did the Enchantment Avenue Council.

Her Waystation was living proof, and they knew it, too. Did their best to keep it all under wraps. An open, unacknowledged secret.

Even if they needed her.

Needed someone to take in the Familiars who couldn't handle the strain of performing like a monkey for unrelenting magical masters. The kinds of masters who didn't even deserve a pet, let alone the special, magical bond shared with a Familiar.

An old argument, though.

She sighed, knowing there was nothing she could do. Not about the Council and not for Lanhi. And all the Familiars like her.

But she wouldn't let them go out alone.

Whatever it took, she'd be there for them.