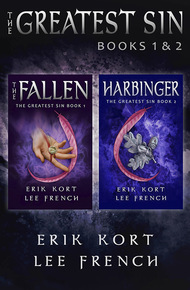 Erik Kort abides in the glorious Pacific Northwest, otherwise known as Mirkwood-Without-The-Giant-Spiders. Though the spiders often grow too numerous for his comfort. He is defended from all eight-legged threats by his brave and overly tolerant wife, and is mocked by his two obligatory writer's cats. When not writing, Erik comforts the elderly, guides youths through vast wildernesses, and smuggles more books into his library of increasingly alarming size. He also writes under the open pen name Erik Marshall, with his dark fantasy novel, Children Without Faces, placing as a quarterfinalist in the 2018 Booklife Prize.

Lee French lives in Olympia, WA with two kids, two bicycles, and too much stuff. Her numerous books and stories span the subgenres of epic fantasy, cyberpunk, superheroes, and sword & sorcery fantasy. She is an avid gamer and active member of the Myth-Weavers online RPG community, where she is known for her fondness for Angry Ninja Squirrels of Doom. She also trains in taekwondo, keeps a nice flower garden with one dragon and absolutely no lawn gnomes, and works an excessive number of book events. She is a member of SFWA and the Northwest Independent Writer's Association, and a Municipal Liaison for her NaNoWriMo region.

The Greatest Sin: Books 1-2 by Erik Kort and Lee French

In Tilzam, a world adrift from its God—and desperate to get Her back—the Agents of the Fallen act in every corner of every kingdom to bring about Reunion. With fingers in every political pie, they uncover plots, investigate murders, and discover dangerous truths...of which their newest recruit, the secretive Seer Chavali, encounters far more than her fair share.

Factions, religious orders, and cults fight for the supremacy of their vision of Reunion. Hurled into this struggle against her will, Chavali finds her once-sheltered existence ripped apart and burnt to ashes. Only the most stubborn, sharp-witted, and hardheaded of women could survive the aftermath and forge herself a new path in the world...

In the first two books of The Greatest Sin series, Lee French and Erik Kort combine mystery and intrigue within an epic fantasy world. Book 1: The Fallen shows the cascading events that first draw Chavali into the secret world of the Fallen Agents. Book 2: Harbinger sends Chavali and the agents to the coastal city of Ket, which harbors a mystery rife with murder, espionage, and plague...just to start.

Chavali watched Keino with a frown as he slipped onto the other seat and leaned on the table, mirroring her. It put their faces close together, close enough to kiss her with just a little effort. How much she actually wanted that was distracting. She put her effort into resisting his pull instead of answering him.

Gently, tenderly, he reached out and touched her hair. She let him get to the point of running two fingers along the feather lashed to a lock of hair before leaning away from him with a sigh. Looking away uncomfortably, she crossed her arms. "I don't want you to touch me. I don't want to know what you're thinking. It's bad enough I spend all day wading through the stupid thoughts of all these idiots who traipse through my tent without having to put up with whatever you want, too."

He sighed and pulled his hand back, let it fall limply to the table. "That's not fair."

"Fair?" She almost slapped him for that, but words could handle that just as well as her hand. Better, even, because he might misinterpret her hand. "At what point did you decide life was fair? 'Fair' is for children and morons," she sneered. "No, Keino, it's not fair at all."

His hand darted out and seized hers. Is this really so bad, really so horrible? I want you, Chavali. I've wanted you for so long. To be mine. With the words, she was also privy to the highly explicit images in his head, of all the things he wanted to do to her, most without any interest at all in whether she wanted it done to her or not. I've watched you grow and blossom into the woman you are, and—

"Get out," she snarled and yanked her hand away to get out of that ramble. "Go whine about your tragic heartbreak to someone else. I am not yours, I never will be, and no amount of persistence on your part will change that."

He sat there, glaring at her while she glared right back at him, for a good ten seconds or so, then got up like he wanted to kick something and stormed out.

Chavali drew in a deep breath and let it out very slowly, closing her eyes and covering her face with both hands. Some day, he would give up. Until then, confrontations like this would keep happening. What a wonderful thing to look forward to for the rest of her life. Because she felt certain that growing older would do nothing to change any of this. He was already twenty-six, a year older than her. His fixation wasn't going to go away because of something as trifling as time.

Two more deep breaths solidified her control enough that she could avoid snapping at the paying customers for no reason. Putting her hands down on her table, she made herself as ready as she'd ever be.

"Oh, right. Of course." He moved quickly, practically jumped onto the stool while shooting terrified looks all around the tent. "I've just never done anything like this before, and, um, I'm worried about…"

"There is another name, with a…'c.' But not at the front, maybe in the end? No, no, the middle. Arcu, Marcus. Yes, Marcus. He wields authority."