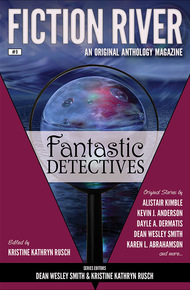 Fantastic detectives come in many forms, from dogs to elves to eggs. (Yes, eggs.) And fantastic detective stories come in all mystery subgenres, from cozy to hard-boiled. (Remember. Eggs.) All of these forms and subgenres combine to create one of the most delightful additions to the Fiction River anthology series. With stories featuring New York Times bestseller Kevin J. Anderson's popular zombie detective Dan Shamble and USA Today bestseller Dean Wesley Smith's most beloved character, Poker Boy, Fantastic Detectives provides Fiction River's most creative volume yet!


"Case Cracked" by Joe Cron
"Living with the Past" by Dayle A. Dermatis
"All She Can Be" by Karen L. Abrahamson
"Under Oregon" by Kara Legend
"Role Model" by Kevin J. Anderson
"Death in Hathaway Tower" by Ryan M. Williams
"Trouble Aboard the Flying Scotsman" by Alistair Kimble
"Containing Patient Zero" by Paul Eckheart
"Canine Agent Rocky Arnold vs. The Evil Alliance" by Juliet Nordeen
"An Incursion of Mice" by Kristine Kathryn Rusch
"They're Back!" by Dean Wesley Smith

As a mystery writer, I loved the idea of Fantastic Detectives when it got attached to a volume of Fiction River back in the planning stages of this series. Just the idea excited me, and then Kris, the editor of this volume, pointed out to me that one of my major series characters under my own name, Poker Boy, was in essence a fantastic detective.

No wonder I liked the idea.

And she told me she wanted a Poker Boy story from me for the volume. No way could I ever say no to an editor (who is also my wife). So in these pages there is a Poker Boy adventure.

As a professional writer, I know a smash-up of two areas like detective fiction and fantastic fiction takes some practice and a weird mind-set to pull off at any level, let alone at the level of craft that Kris would demand for this volume. She won a Hugo Award, after all, for her professional editing because of her demand for quality fiction in anything she edited.

So I was a little worried Kris would find stories for this volume.

It turned out that I didn't need to worry. She pulled it off, found the stories, and even wrote a fun one herself for the volume, since she is also an Edgar Award-nominated mystery writer under various names.

I also liked this idea for a Fiction River volume because of the very title: Fantastic Detectives. That title fits everything Fiction River is about for me. This series of volumes does not allow genre lines or false marketing lines to hold back the writers or the editors.

From volume to volume, Fiction River plays with genre lines, either purposely breaking them, or more often just ignoring them. Each story stays true to the title of the volume, but not some genre limitation. The only requirement: A quality story.

Kris and I have both been writers known for crossing genre lines. Sometimes we would change names when we did, other times we would focus a story slightly one side of the line or the other.

In publishing of ten years ago, that was difficult because of marketing. But in this new world, readers are starting to like more blurring of genre lines. And Kris and I love that.

We know that by having that as a focus for this series of volumes, and allowing editors and writers to move freely across genre lines when a story demands it, some readers will be surprised by some stories in a volume. Readers often like being surprised. Other reader's personal tastes won't allow them to like every story in an issue. We figure that's fine as well. In fact, we figure only the editor of the volume will like every story in a volume.

But no matter what, every story will be a quality story, told well, by a professional storyteller.

And we know this focus is working because after a year now, Fiction River has more subscribers and sells more copies online and in local bookstores than ever. And the sales and subscribers keep growing every month. So something about the focus on quality fiction with no restrictions is working.

So I hope you enjoy this volume of Fiction River. I sure did. Some of the stories in here are dark, some are light, some are wild, and some are just great stories. All are mystery detective stories in one form or another. And all have a fantastic element to them.