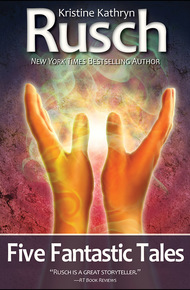 The five magical stories in this short collection include stories of fairies and shapeshifters and magic shops. In this collection, you'll find the heartwarming "Flower Fairies," the whimsical "The Poop Thief," the outrageous "Say Hello To My Little Friend," the political vampire tale, "Victims," and a tale of high school gone wrong, "Domestic Magic."

I got glasses around the age of ten, but I needed them much earlier. I lied about it. I kept telling my parents my eyes were just fine. When they finally got my eyes tested, I needed pretty serious glasses. My mother, ever practical, bought the cheapest pair, some unfashionable cat's eyes with rhinestones.

I stepped on them the very next day on purpose and told Mother that some other kid (unnamed) had done it. I don't know if she believed me, since she knew I wanted the more fashionable (and expensive) granny glasses. Off we went to the eye doctor who replaced my lenses in those horrible cat eye frames.

I stepped on the frames the next day.

This time, my parents caved in and I got the granny glasses. I took them off once I got to school, however, and only put them on when I really needed to see the chalkboard.

I was thirteen when my best friend pulled me aside and said, "You know, you look worse when you squint than you do when you wear your glasses." I practiced in front of the mirror and discovered that lo and behold, she was right.

I wore my glasses from then on. Then, at sixteen, I got contact lenses, and could see all the time.

But my bratty history with glasses means that I spent most of my formative years looking at a fuzzy world. A world where things weren't quite what they appeared. A world where an amorphous green and brown blob might be a tree or it might be a man wearing a brown suit and a green hat.

Without my glasses, the world was full of possibilities.

I often write about sneaky magic, little magic, magic that seems less powerful than it is. I think that comes from the disappointment of discovering a tree when I expected a man. Or realizing that the scary ghost-like thing at the edge of the yard is actually a shirt drying on a clothesline.

This little collection is filled with stories about sideways, little, and sneaky magic. It starts with "Flower Fairies," which is a rare story in that I dreamed it before I wrote it. I actually saw that little flower fairy peering out of her bouquet in a dream, got up, and wrote down the opening image before I forgot it.

Next, "The Poop Thief," which I fortunately did not dream. "The Poop Thief" didn't come from anything visual. Instead, it came from an ad on the radio for a lawn cleanup service. I, of course, took it the wrong way.

I wrote "Domestic Magic" for an anthology Denise Little put together in the height of the Harry Potter craze. She wanted a story about magic and high school. I was trying to figure out a way to write about something that wasn't Potterish. Instead of dealing with the most magical kid in school, I dealt with the least.

"Say Hello To My Little Friend" is an imaginary friend story. I have many imaginary friends—that's why I write. So, for me, "imaginary" and "friend" in combination does not mean someone who does not exist. And if I say any more, I ruin the story for you. Enjoy the whimsy, because the final story in the book isn't whimsical at all.

When I wrote "Victims" in the late 1990s, vampires were not considered sexy or anywhere close to human. If anything, this story has become more relevant over time. In its day, it was so unusual that the initial editor commented on the strange point of view.

Now it belongs in a collection of urban fantasy, right alongside the flower fairies.

This is my second five-story collection. The stories unite around a genre or a theme or a topic. Sometimes you'll find duplications. Sometimes you won't. What you will find are stories that should be together at a cheaper price than you would get them if you bought them as individual e-books.

I hope you like these five fantastic tales. There are five more in the future, and five more after that. In the past twenty years, I seem to have written a lot of stories. And the wonderful changes to the publishing industry have allowed me to make them available to you.