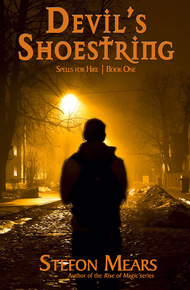 Conjure man Heath Cyr plies his spells and charms in the streets of Portland, Oregon. A modern-day nexus for wizards, witches, and stranger things.

Heath's landlord — one of those stranger things — pressures Heath to brave stiff competition and retrieve The Black Book of Saint Cyprian. The true grimoire of the patron saint of necromancers.

An evil book, with an agenda of its own...

Devil's Shoestring, an exciting urban fantasy novel full of twists and enchantment. Hoodoo and Vodou join obscure Eastern magic and wild Western practices in a gumbo that could only be brewed in Portland, Oregon. Fans of Grimm and Harry Dresden won't want to miss this! The first Spells for Hire novel, from Stefon Mears, author of the Rise of Magic series.

Heath stood on the cusp of redemption. Redemption in this case was a bar called Gripper.

From the outside it didn't look like much in the best of times, and in the dying sunlight of a July evening, it looked downright uninviting. No windows in the front. No sign. Nothing to attract the attention of wandering tourists – or worse, locals not in the know who might mistake it for a neighborhood watering hole.

Gripper wasn't looking for people who might be curious about a dog shit brown stucco building sandwiched between a salvage shop and a musical instruments store. People who wanted to talk about the Blazers or the Timbers or the Thorns or the Winterhawks or the Ducks or the Beavers.

The sports fans and the bike-riders and the hipsters could buy their Pabst Blue Ribbon somewhere else. Gripper catered to a specific clientele, and the only people welcome there didn't need a sign to tell them what it was.

Patrons entered through a red door with a purple symbol in the center of the frame that looked like a stylized number four to the casual observer.

Heath knew it was the symbol of Jupiter from one of those musty old grimoires. He still thought it looked like a stylized number four. But planetary magic was Maggie's shtick, and it was her bar.

Not a hundred feet away traffic still buzzed up and down Burnside, some heading across the Willamette for the west side of Portland or points beyond, others on their way back. Everyone in a hurry, but Heath couldn't bring himself to move.

If he was honest with himself, Heath would have admitted nerves did as much to stick his red-and-black Hawaiian shirt to his back as the heat and humidity. But this was not the time for introspection.

This was twilight, that perfect moment when the shadows vanished but the street lights hadn't kicked on. When the whole world grew sharp and clear to the eye. Great time of day to cast certain charms.

And a great time for a drink in the company of his peers.

If he was welcome.

Heath patted the mojo bag in the right pocket of his black jeans, hoisted his backpack a little higher on his right shoulder. He spat left, then right, then knocked. Three knocks, because it was a Thursday.

As the door opened, a hit of air conditioning lifted Heath's spirits immediately, but his breath caught when he saw who was holding the doorknob. She looked like a frail old woman, seventy-five if she was a day under a hundred. Skin so white her wrinkles were all but translucent. Locks of silver gray that dangled to her shoulders and a turquoise dress that fit her like a queenly robe. Powdery-sweet perfume hung about her like a personal fog.

But Mrs. Halloran's green eyes held sharpness that could cut steel. And the silver torc around her neck, twisted Celtic knot work, was the resting place of a familiar spirit with a nasty reputation.

Heath had to swallow hard before he could speak. He could hear laughing and talking and strains of Greek folk music coming from inside, and he drew hope from the merriment. He could even smell a hint of garlic fries past the perfume.

She arched an eyebrow as she looked up at him, and allowed just a touch of her old-country Irish lilt to flavor her words when she said, "Heath Cyr. The twilight boy."

Heath forced a tight-lipped smile and ground his teeth. Some people called him "Twilight" because he walked the line between spirits and humans. Others because they considered his magic somewhere between one flavor and another.

Mrs. Halloran turned the occasional nickname into "the twilight boy" because of the color of his skin. Not white as his mother, though his brown curls matched the ones growing out of her scalp. Not black as his father, though their dark brown eyes were a perfect match. Somewhere in between, like so many things in Heath's life.

"Been a long time since you last knocked on this door, Heath Cyr."

"Sure, and we've all heard a bit about that. Banished a duke of Hell, some are saying."

Heath chose not to point out that it was a marquis. And that it was less a proper banishment than a remarkable piece of trickery if he said so himself. Instead he gave a noncommittal one-shoulder shrug.

Mrs. Halloran smiled. But she didn't move to let him in. She didn't close the door either, though. Finally, she said, "You weren't thinking I was going to let you in here carrying that bag o' tricks. You haven't been gone that long."

Heath turned a relieved sigh into a chuckle as he handed over his backpack.

Mrs. Halloran moved aside, but before Heath could finish a step she put a hand on his chest.

"Start something tonight, twilight boy, and I'll finish it."

Heath raised his hands in mock surrender. "Never doubted that for a moment. I just want a drink."

Mrs. Halloran looked him up and down, and though she stood a good foot shorter than Heath's six feet, without using the slightest bit of magic she managed to make him feel small.

"I suggest you stick to that."

She moved off then, and Heath let the door close behind him. Air conditioning soothed his skin while he got a good look at the interior of Gripper for the first time in many months. Nothing had changed.

Seven large tables in the center, painted the colors Cornelius Agrippa attributed to the planets in his books. Or at least, that was what Maggie had said when Heath asked why the little square tables were all brown but the big round ones were colorful. Black, blue, red, yellow, green, orange and silver. Like they belonged as marshmallows in a breakfast cereal.

Heath had then asked why not nine? Or at least eight, depending on how she felt about Pluto. That question only got him a smile, but at least Maggie had a good smile.

The ceiling was painted as a star field, black, with swirls of red and blue for nebulae and scores of little lights for the stars. There were floodlights arrayed around the perimeter, if needed, but the little lights kept the bar feeling cozy without getting dim.

Only five patrons so far tonight, all of them people Heath recognized. But his eye was immediately drawn to the bar itself. Not the heavy-set man with the balding pate and the ill-fitting shirt and cargo pants, but the gorgeous Brazilian woman he was talking to.

It wasn't her caramel skin or her soft brown hair or the slender curves barely concealed under the light fabric of her midnight blue dress that drew Heath's attention.

It was the black heart behind the beauty everyone knew as Vizinha.