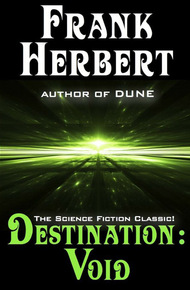 The starship Earthling, filled with thousands of hybernating colonists en route to a new world at Tau Ceti, is stranded beyond the solar system when the ship’s three Organic Mental Cores—disembodied human brains that control the vessel’s functions—go insane. An emergency skeleton crew sees only one chance for survival: to create an artificial consciousness in the Earthling’s primary computer, which could guide them to their destination ... or could destroy the human race.

Frank Herbert’s DUNE is the best-selling science fiction novel of all time, and Frank write six novels in that series—but he also wrote many other SF classics, and Destination Void is one of the most respected of all his titles. A classic thriller of an insane computer and a small crew trapped aboard a spaceship. This launches his popular Pandora Sequence. – Kevin J. Anderson

I saw the pale student of unhallowed arts kneeling beside the thing he had put together. I saw the hideous phantasm of a man stretched out, and then, on the working of some powerful engine, show signs of life and stir with an uneasy, half-vital motion. Frightful must it be, for supremely frightful would be the effect of any human endeavor to mock the stupendous mechanism of the Creator.

—Mary Shelley on the creation of Frankenstein

It was the fifth clone ship to go out from Moonbase on Project Consciousness and he leaned forward to watch it carefully as his duty demanded. The view showed it passing the Pluto orbit and he knew that by this time the crew had encountered the usual programmed frustrations, even some deaths and serious injuries, but that was the pattern.

The ship was a giant egg, one-half of it a dark shadow lambent on a starry background, the other half reflecting silver from the distant sun.

A nervous cough sounded from the darkness behind him and he suppressed a sympathetic repetition of that sound. Others were not as self-controlled.

By the time the coughing spasms had subsided, the Earthling had begun to make its turn. The movement was impossible, but there was no denying what they all saw. The ship turned through one hundred and eighty degrees and reversed, heading directly back down its outward track.

"Any clue at all on how they did that?" he asked.

"I want you to go through the message capsule again," he said. "We're missing something."

"Yes, sir." It was a sigh of resignation.

Someone else spoke from the darkness: "Get ready for the capsule launching ..."

Yes, they'd all seen this enough to anticipate the sequence.

The capsule was a silver needle that looped from the Earthling's stern. It held to the ship's blind spot (who knew what weapons such a ship might produce?) until it was lost among the stars.

From beneath their view a flame darted—the laser relay with its destruct message. A purple glow touched the ship's bulbous nose. It held for no more than three heartbeats before the ship exploded in a blinding orange blossom.

"That Flattery model is sure as hell reliable," someone said.

Nervous laughter went around the room, but he ignored it, concentrating on the viewer. Why the hell did they always think it was the Flattery model? It could be anyone on the crew.

Their view closed on the swollen blossom with the collapsing speed of time-lapse which made the explosion's orange light wink out too rapidly. Presently, the movement slowed and their view moved into the spreading wreckage, probing with crystalline flares of light until it found what it sought—the recording box. That and the message capsule were the most important elements remaining from this failure.

Claw retractors could be seen grabbing the recording box and pulling it back beneath their view. The crystalline light continued to probe. Anything they saw here could be valuable. But the light picked out nothing but twisted metal, torn shreds of plastic and, here and there, limbs and other parts of the crew. There was one particularly brutal glimpse of a head with part of a shoulder and an arm that ended just below the elbow. Bloody frost globules had formed around the head but they still recognized it.

The view blanked out and he leaned back, feeling the ache between his shoulders. He knew he would have to identify that woman and have her transferred. No mistaking the near hysteria in her voice. Some harsh catharsis was indicated. He shut down the holopack's controls, flicked the switch for the room lights, then stood and turned in the blinking brilliance.

"They're clones," he said, keeping his voice cold. "They are not human; they are clones, as is indicated by their uniform middle name of ‘Lon.' They are property! Anybody who forgets that is going off Moonbase in the next shuttle. That sign on my door says ‘Morgan Hempstead, Director.' There will be no more emotional outbursts in this room as long as I am Director."