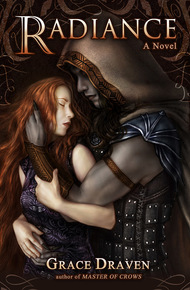 Grace Draven is a Louisiana native living in Texas with her husband, kids and a big, doofus dog. She has loved storytelling since forever and is a fan of the fictional bad boy. She is a 2-time winner of the Romantic Times Reviewers Choice Award for Best Fantasy Romance, and a USA Today Bestselling author.

THE PRINCE OF NO VALUE

Brishen Khaskem, prince of the Kai, has lived content as the nonessential spare heir to a throne secured many times over. A trade and political alliance between the human kingdom of Gaur and the Kai kingdom of Bast-Haradis requires that he marry a Gauri woman to seal the treaty. Always a dutiful son, Brishen agrees to the marriage and discovers his bride is as ugly as he expected and more beautiful than he could have imagined.

THE NOBLEWOMAN OF NO IMPORTANCE

Ildiko, niece of the Gauri king, has always known her only worth to the royal family lay in a strategic marriage. Resigned to her fate, she is horrified to learn that her intended groom isn't just a foreign aristocrat but the younger prince of a people neither familiar nor human. Bound to her new husband, Ildiko will leave behind all she's known to embrace a man shrouded in darkness but with a soul forged by light.

Two people brought together by the trappings of duty and politics will discover they are destined for each other, even as the powers of a hostile kingdom scheme to tear them apart.

Grace Draven's brilliant, bestselling opening to the Wraith Kings fantasy romance series has dazzled readers with its tale of a human woman married to a Kai warrior. She learns to find a way past his razor sharp teeth and fearsome claws and together they forge an alliance that provides a guiding light for both their peoples. – Terry Mixon, SFWA

Today was Ildiko's wedding day, and if she managed not to retch on herself or a guest, she'd consider the entire event a resounding success.

Her maids refused to meet her gaze while they laced her into her gown and twitched the train into perfect folds, but she'd caught their looks of pity mixed with horror from the corner of her eye. Ildiko told herself to ignore them. Arranged marriages were the fate of nearly all aristocratic Gauri women, each one made for power, for trade, for good of country. His Majesty, Sangur the Lame, had married off both his daughters to princes of foreign lands as part of the negotiations for access to ports and allies in war. The Gauri king's niece was no exception to the protocol, and Ildiko had always expected a similar fate. The only question was when—not if—it happened.

But you never expected a Kai groom.

The thought scraped across her mind. Saliva flooded her mouth as the nausea roiling in her belly threatened to surge into her throat. Ildiko closed her eyes and swayed where she stood on the tailoring stool. A hand gripped her leg to steady her, and she opened her eyes to stare down at the royal dressmaker.

Worry lines gathered even more wrinkles into the woman's face. She spat the pins clamped between her lips into her free hand. "Are you all right, my lady?"

Ildiko nodded. She wouldn't shame herself or the Gauri court by falling apart before their Kai guests. She breathed deep to quell her fear. The time for tears and sickness had passed. She'd indulged in her terror earlier in the privacy of her bedroom. She might be chattel, but she would remain dignified.

Her future husband faced the same fate. With the gift of privilege came the burden of expectation. As the younger son of the Kai king, his duty was to marry in a way most beneficial to his people. He'd meet Ildiko for the first time as they stood before a flock of bishops and pledged their troth to each other.

A trickle of cold sweat slid down her back beneath the gown. As his wife, she'd have to bed him. No one ever heard of any living children born to a Kai and human couple, but that didn't matter. A consummated marriage acted as the blood seal on a contract, even if she never bore him children. If Sangur the Lame didn't think it might offend his future in-laws, he'd insist on a contingent of witnesses standing in the bridal chamber to verify the consummation and assure everyone the alliance he'd wrought through this arranged marriage was complete. But the Kai were not human, their culture different and mostly unknown to those outside their borders. Ildiko was grateful for their mystery, which prevented such a public humiliation.

The royal dressmaker tugged a few more times on her gown, snapped out orders to her assistant seamstresses to pick up pins, thread and needles and pronounced their work done. She helped Ildiko off the stool. "Come to the mirror and see, my lady. You look beautiful."

Ildiko followed her to the full length mirror standing in one corner of her room. The pale reflection looking back at her did nothing to cheer her, and for a moment she fancied she stared at a stranger.

The gown was a masterful creation of embroidered bronze silk that hugged her breasts, hips and thighs before flowing out into a skirt and train. The fabric followed the line of her shoulders but left her neck and collarbones bare. Long sleeves ended at points over her hands. Her hair was coiffed in an intricate style of braids woven together and fastened with jeweled pins. She wore the rich trappings of a woman of high station and great wealth.

She frowned at her image. "What a waste."

Behind her, the dressmaker blanched. "You don't like the gown, my lady?"

Ildiko reassured the woman she considered the gown perfect. "However, I think all this will be lost on my groom and his Kai entourage."

The other woman's lip curled in disgust. "Ugly bastards. All of them. What would they know of beauty?" She realized the insult in her remark. "I'm sure your groom will be different and appreciate how lovely you are."

The likelihood of that happening was small. Were she marrying someone other than a Kai, the dressmaker might be right. She only hoped she and her intended managed not to bolt in opposite directions when they first sighted each other.

She requested an hour of privacy before she had to present herself at court and sent the group of dressmakers and maids from the room. The scent of spring flowers from the gardens drifted through the chamber's open window, enticing her.

Ildiko would miss very little when she left with her new husband for his home. She was the king's niece, the orphaned child of his younger sister. Her place in the family insured a stately home, regular meals and fine clothes. It insured nothing else, and there was no love lost between her and her living relatives. This new marriage might offer nothing different, except a change in her place in court hierarchy. By marrying the prince, she became a duchess, a Kai hercegesé.

The window opened onto a panoramic view of the manicured gardens with their rolling swards of green grass, fanciful topiaries, and colorful borders of flowers. She would miss the gardens. They had been her sanctuary over the years, an escape from her harassing cousins and a means to assuage her loneliness.

If the Kai royal family had gardens, Ildiko suspected they were nothing like these. She imagined all manner of strange, macabre plants twisting and swaying as they grew out of exotic soil by moonlight and bloomed with menacing flowers that hid fangs amongst the petals. One didn't walk amongst such flora without armor. She shivered.

Her thoughts propelled her out of her room and down a short flight of stairs to a back hall leading to the gardens. Warm sunshine caressed her shoulders. Ildiko raised her face to the light and breathed deeply of honeysuckle and jasmine. The dressmaker would have a fit of the vapors when she saw the ruin done to her creation's hem, but the thought didn't stop Ildiko from journeying into the depths of her favorite place in all of Gaur. Besides, no one at the wedding would be looking at her hem. They'd be too busy gawking in horror at either the groom or the bride.

She strolled leisurely along a winding path that meandered past bubbling ponds filled with large goldfish as tame as dogs, regiments of poisonous foxglove in every color and hue, and clusters of orange butterfly vine draped over trellises and swarmed by hummingbirds. Willow trees hugged the shores of the larger ponds, creating canopies of green shade that sheltered ferns and silver-leafed lungwort. Ildiko had spent many a quiet hour as a child hidden behind a willow's drape, reading a pilfered book in the dappled light that spilled through the branches.

Stately oaks dotted the landscape, their great branches of rutted bark thick with leaves. She followed the path leading to one of the giants. She didn't visit this part of the garden often. The queen's roses grew here, and Ildiko avoided those places the queen favored. She felt safe enough visiting today. Fantine was too busy playing hostess to her guests or counting the treasure they'd brought as bride gift. Ildiko could admire the hundreds of rose bushes planted in clusters and lines in solitude.

Or so she thought. She turned a corner and halted. A figure, cloaked and hooded in black, stood motionless next to a dense patch of thorny roses the color of blood. It turned at the sound of Ildiko's steps. She inhaled a harsh breath. A pair of nacreous eyes, without iris or pupil, stared at her from the hood's shadowed depth. A long-fingered hand, gray-skinned as a corpse's and tipped with dark nails, lifted in silent greeting. Ildiko balanced on the balls of her feet, poised to flee. If she didn't know better, she'd believe she stumbled across a demon amidst the roses. This was no demon—despite appearances—but one of the Kai. And it would be the height of rudeness for her to run screaming from a future relative by marriage.