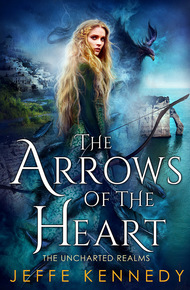 Jeffe Kennedy is an award-winning, best-selling author who writes fantasy, fantasy romance, and contemporary romance. She serves on the Board of Directors for SFWA as a Director at Large. She lives in Santa Fe, New Mexico, with two Maine coon cats, plentiful free-range lizards and a very handsome Doctor of Oriental Medicine.

Jeffe can be found online at her website: JeffeKennedy.com, every Sunday at the SFF Seven blog, on Facebook, on Goodreads and on Twitter @jeffekennedy. She is represented by Sarah Younger of Nancy Yost Literary Agency.

The Arrows of the Heart by Jeffe Kennedy

As the Twelve Kingdoms and their allies are drawn toward war, a princess cast aside must discover a purpose she never dreamed of…

Karyn af Hardie behaved like a proper Dasnarian wife. She acquiesced, she accepted, she submitted. Until her husband gave her a choice: their loveless, unconsummated royal marriage—or her freedom. Karyn chose freedom. But with nowhere to run except into the arms of Dasnaria's enemies, she wonders if she's made a mistake. She wants love, security, a family. She can't imagine finding any of it among the mercurial Tala.

Worst of all is Zyr. The uninhibited shapeshifter is everywhere she looks. He's magnetic, relentless, teasing and tempting as if she's free to take her pleasure where she wishes. As if there isn't a war rising before them, against a vile and demanding force far stronger than they. But with Karyn's loyalty far from certain, Zyr offers her only chance to aid the defense—a dangerous gambit to seek out a land not seen in centuries, using clues no one can decipher. Together, they'll have every opportunity to fail—and one chance to steal something truly precious…

This is a beautifully crafted tale of love and sacrifice. The poignant duet between magic and mundane echoes from the first page to the last. I'm not a fan of shifter romance, but this lush fantasy goes so far beyond werewolves that I'll be watching for the sequel. – Terry Mixon, SFWA

As soon as the sky lightened with the promise of dawn, I dressed and went out.

Better than staring at the empty foreign sky outside the unglazed windows, waiting until it was time to meet the Hawks for training. I'd walk down to the market stalls and get breakfast and hot floral tea, then sit and watch the sea, try to pretend I fit in. That way I could at least be around other people.

Walking out of the little apartment they'd assigned to me in the cliff city of Annfwn, capital of the Tala homeland, I took a deep breath, hoping it looked like I only admired the view, instead of needing a moment to steady myself. It was a spectacular one, to be sure. Only a broad path separated my front door from a stone balustrade and then a sheer drop to the beach below. The gentle, tropically warm sea lay in shadow still, with the sun yet to break over the mountain behind me. Farther out, though, the sun's rays hit the water, turning it an astonishing shade of aqua.

If I had to be stranded in a foreign land, forever exiled from my family and the future that had once shone so bright, at least I'd ended up in a pretty place. Until they kicked me out for being at best useless and at worst an enemy.

For the moment, however, I had coin—actual money, for the first time in my life—and I could buy some food to assuage my empty belly. One aching hole in myself that could be easily filled.

Resolutely straightening my spine—after all, I'd been the fourth highest ranked woman in the Dasnarian Empire, until I threw it all away—I turned my feet downhill, walking on the public path down the cliff face to the market level.

I hadn't gotten more than one level down when I came around a bend and saw the child. Like all Tala, she had long, dark hair, hers in elaborate ringlets. She perched, weeping piteously, and squatting on low wall that bordered the road—with a sheer drop beneath. My heart skipped into a panicked beat. The Tala were casual about such things, but I couldn't understand how. I wanted to seize her and sweep her off the ledge, then lecture her furiously.

Though I'd be speaking in Common Tongue, which I understood reasonably well now from my friend Jepp's thorough—and occasionally pointed—tutelage on board the Hákyrling. The warrior woman hadn't taught me any of the liquid Tala language. The Tala didn't seem to have rules for me to cite, regardless.

Still, I'd never forgive myself if the child fell and I'd done nothing. Moving swiftly, I put my hands on her shoulders. "Careful," I said in Common Tongue. Or rather, started to say.

Beneath my touch, the girl vanished, a pretty songbird exploding to wing in her place. I shrieked in reflexive shock, clasping my hands over my mouth. The bird returned to circle my head, then became the little girl again. If she were a Dasnarian child, I'd guess her to be about eight, as I had several nieces that age. The Tala didn't age the same as normal people, though, so I couldn't be sure. She stared at me owlishly, eyes a light shade of blue, and she said something in her language.

I held up my palms in ignorance. "I'm sorry, I don't understand."

"I speak Common Tongue," she said, with a better accent than mine. "You scared me."

"You scared me," I said sternly. "It's not safe to be…" I trailed off, realizing that a child who could become a bird at a moment's notice would hardly be vulnerable to a fall. What a fool I was, in this strange place where nothing made sense. "I heard you weeping," I finished instead. "Are you all right?"

Her smooth face crumpled, tears welling up again and magnifying the pretty blue. "My aunt is dead, and my mother is sad all the time."

Oh. How terrible. "I'm so sorry," I said, wanting to cuddle her. I didn't know the customs for dealing with children here, though.

"Why are you sorry?" She asked, cocking her head, much as the bright-eyed bird would've done. "It was the Deyrr sleeper-spies. She was out swimming as a fish and an undead shark ate her."

I wondered how they knew what happened to the aunt, if she'd been eaten, not that I'd be so rude as to ask. The magically animated corpses that the Tala called sleeper spies didn't eat, so probably the thing had just chewed her up. Did the Tala revert to human form after death? A daunting thought. I shuddered. "I'm sorry. That sounds very hard."

"You shouldn't be sorry. I know you didn't kill her. And even though you're Dasnarian, you're not them." She said it with such scorn and disgust that she sounded very nearly adult.

I didn't know what to say. The practitioners of Deyrr came from Dasnaria, but no right-thinking people had anything to do with the cult and their black magic. Still, I felt some responsibility, that such a dark thing had come from my homeland to hers. Not that I could affect anything in this ongoing war. I was only a woman, not a warrior. I was also a refugee and dependent on their tolerance. How to explain that to an eight-year-old girl?

"You seem to know a lot about the war," I ventured. No girl child in Dasnaria would know so much.

"I have a very good teacher," she explained. "Zyr teaches us about shapeshifting, and we've been practicing how to fight the sleeper spies. I jump on them from above and make them confused by flying around their heads really fast. I can only be a songbird, so I'm not much other use in a fight." She made a face, clearly disappointed with that.

Privately I thought Zyr shouldn't be teaching the girls to fight anyway—and who knew the flirtatious, changeable man who plagued me at every turn was a teacher? "That's more than I can do," I said.

"Yes, all Dasnarians are mossbacks," she replied with authority. "Zyr said. But you can shoot a bow really well, he said, too. You're Karyn and a nice person. You won't hurt us. I'm Thalia," she added, almost as an afterthought.

I curtseyed, lowering my gaze. Zyr had talked about me? How…disconcerting. "It's a privilege to make your acquaintance, Thalia."

She laughed. "You're funny."

It just figured that a Tala child would find good manners laughable.