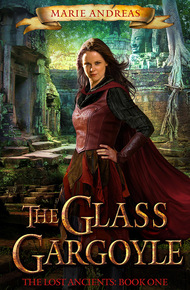 The Glass Gargoyle by Marie Andreas

Archeologist Taryn St. Giles has spent her life mining the ruins of the elves who vanished from the Four Kingdoms a thousand years ago. But when her patrons begin disappearing too—and then turning up dead—she finds herself unemployed, restless, and desperate. So she goes looking for other missing things: as a bounty hunter.

Chased, robbed, kidnapped, and distressingly low on rent money, Taryn just wants one quiet beer and to catch her fugitive. But there's more to Alric than his wicked grin—is he a wanted man or the city's only hope? With menacing mages in pursuit and her three alcoholic faery sidekicks always in her hair, Taryn's curiosity might finally solve the mystery of the elves… or be the death of her and destroy her world.

Marie Andreas writes a raucous and exciting world that grabs you by the shirt and drags you into the bar brawl the protagonist's life has become. This book and the characters in it don't let up, so hang on. – Terry Mixon, SFWA

I looked around as a snippet of song rang out over the noise of the pub. A song sung by only one creature I knew—my faery, Crusty Bucket—and only when she was dangerously drunk. I had no idea where she was in the pub. The Shimmering Dewdrop was deep in a raging bar fight and, from the bodies littering the floor, it had started long before I pushed open the door. Pretty much the norm for a Saturday night . . . except this was Tuesday night and the mayhem seemed more focused than usual. The smell of spilled booze and cheap tallow candles was far stronger than it had been for a long time.

I took a deep breath and shook off some of the rain that had hounded me the entire way here. Maybe I was wrong, maybe I hadn't heard her. But again the high pitched singing flew over the noise of the fighting.

"Bring me the dancing minkies!"

I froze, wondering if anyone else heard it. Faeries aren't beloved by most creatures—drunken ones are often hunted down and smashed. Not that they stay smashed, mind you.

The last thing I needed right now were my faeries out and about. And drunk. The main reason I'd taken this bounty hunting job to find this Alric person was to make sure those tiny hooligans and I stayed off the streets.

I'd been chasing him for the last two hours in the pouring rain, only to be told that he'd gone to ground in my pub. No, I don't own the Shimmering Dewdrop, but I've spent plenty of time and cash here. The fact that the son of a hag was holed up in my home away from home was enough to annoy any self-respecting woman.

Crusty's song trailed off—most likely she'd jumped into another bottle of ale—and I let myself ignore her for the moment. The thin whistling sound of a chair flying at me suggested that ignoring the pub fight would be more difficult. I ducked, then looked around to see that far more chairs were being used as weapons than as seating.

I didn't have time to get involved in a fight right now. I needed to find Alric, deliver him to the wizard, Cirocco, and then pay my landlady with the bounty money. Otherwise, my faeries and I would be on the streets by tomorrow night. And it wouldn't be long before they did something to land us all in jail.

In my effort to keep an eye on the fighting in the main part of the pub, I failed to watch the floor and crashed to the ground. I had somehow managed to miss the two massive minotaurs wrestling on the floor.

I jumped to my feet. Staying down too long during a pub brawl could be fatal. Besides, I knew what was on the floor here. With a shudder, I tapped one of the minotaurs with the toe of my boot. I had assumed they had been fighting, but neither of them had budged since I fell on them. I jabbed the other one a bit harder than the first. Nothing. Dead or just really focused, and I didn't want to know which right now. I stepped around them with only a modicum of swearing.

It was hard enough adjusting to the idea of having to bounty hunt for a living. I shouldn't have to wade through bodies to get it done. Sadly, the natives were not only restless, they were potentially homicidal.

There was no way I was going to find my quarry in this mess. Hell, he could be one of the unmoving bodies shoved up against the walls. My best bet would be to wait until the locals finished their playtime and then scoop him off the floor and drag him in by his heels.

Which would be easier if I had more than just a vague description of what Alric looked like.

He was a newcomer to the town of Beccia—tall, unfashionably long black hair, maybe some backwoods low-ranking fae in his family line. The guy who hired me sold him as a pretty boy, an easy collar.

I should have been suspicious immediately.

If this job didn't pay three months' rent, I'd walk away right now. Actually, even with the rent issue, I should've walked. This night was not going to end well—I could feel it in my left elbow. But I never was a bright one, so instead I moved to the far wall and started slowly picking my way through the mess. I had to flatten myself up against the wall a few times as the fighting surged back into full force.

"Taryn!" The voice that greeted me seemed to have come from the far right, but in the melee it was hard to tell. "Over here before you get hit!"

I finally spotted Foxmorton, owner and barkeep of the Shimmering Dewdrop, at the far end of the bar. He didn't seem too worried about the fight going on around him, but he stayed clear and ducked as a stray barstool flew his direction. I made my way over to him. Foxy looked like a cross between a troll, a wild boar, and a neighbor's pet dog. But at seven feet plus, no one messed with him. Ever.

"What the hell happened?" I yelled to Foxy.

He shook his head with a frown, his long floppy ears competing with his fierce tusks in a mishmash of heritage. "He did." He pointed to the far side of the bar where a space opened around two people.

A handsome dark-haired man sat calmly at the bar and flirted with Dogmaela, the tavern wench, like there wasn't a barstool out of place. My eyes widened with disbelief. Dogmaela was a full four hundred pounds of troll; few men trifled with her and lived. But whatever the cutie was feeding her, she was eating it up like it was a freshly killed knight.

The fighting surged closer to them and a random fist swung out at the handsome man's head. Without looking away from Dogmaela, he grabbed the fist and shoved it, and its owner, back into the crowd.

It took me a minute to realize who he must be.