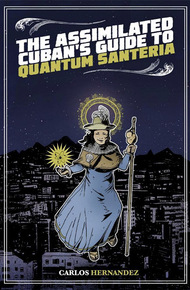 Carlos Hernandez is the author of over 30 works of fiction, poetry, prose and drama. By day, he is an Associate Professor at the City University of New York, where he teaches English courses at BMCC

and is a member of the doctoral faculty at The CUNY Graduate Center. Carlos is also a game designer, currently serving as lead writer on Meriwether, a CRPG about the Lewis and Clark Expedition. He is the author of The Assimilated Cuban's Guide to Quantum Santeria (Rosarium Publishing), and his Rick Riordan Presents YA novel, Sal and Gabi Break the Universe, is due out later this year. He lives in Queens, which is most famous for not being Brooklyn.

The Assimilated Cuban's Guide to Quantum Santeria by Carlos Hernandez

A quirky collection of short sci-fi stories for fans of Kij Johnson and Kelly Link Assimilation is founded on surrender and being broken; this collection of short stories features people who have assimilated, but are actively trying to reclaim their lives. There is a concert pianist who defies death by uploading his soul into his piano. There is the person who draws his mother's ghost out of the bullet hole in the wall near where she was executed. Another character has a horn growing out of the center of his forehead—punishment for an affair. But he is too weak to end it, too much in love to be moral. Another story recounts a panda breeder looking for tips. And then there's a border patrol agent trying to figure out how to process undocumented visitors from another galaxy. Poignant by way of funny, and philosophical by way of grotesque, Hernandez's stories are prayers for self-sovereignty.

The Assimilated Cuban's Guide to Quantum Santeria is a good example of how contemporary authors of Latin American heritage are exploring the fantastic, not quite inhabiting the old mold of the magic realists, and instead exploring the edges of genre. – Silvia Moreno-Garcia

Vocations don't grant vacations. I'm supposedly on holiday in London when I get an offer no reporter could refuse: to see a unicorn in the wild.

I'm with my friend Samantha, hanging out at a small pub after a long night's clubbing, still wearing our dance-rumpled party dresses, dying to get out of our heels. Sam's father Will owns the place and tonight he's tending bar, so it's a perfect spot for late-night chips and hair-of-the-dog nightcaps. Plus, most of the clientele are in their 50s. We wouldn't have to spend all evening judo-throwing chirpsers.

Or so we thought. Sam tics with her neck; I look over her shoulder and see a guy sitting alone staring at us over his drink. He could be my dad, if my dad had forgotten to bring a condom to his junior prom. Short, stout, but really fit; looks like a cooper built his torso. The man's never heard of moisturizer. He's wearing a black pinstripe shirt with a skinny leather tie, black pleated pants and black ankle- boots. I am sure some cute sales girl had dressed him—because nobody who cared about him would've let him leave the house looking like dog's dinner.

And now—shit—I scrutinized him too long. He comes over, beer in hand.

"We're not hookers," says Sam. "I know these dresses might give a gentleman the wrong impression."

"Right," he says, and turns on his heel.

"Hold on, Gavin," says Will, who's just pulled up with my Moscow Mule. "Don't let these two termagants scare you off. Make a little room for Gavin, Sam, will you?"

Gavin considers us a moment, then pulls up the stool next to Sa- mantha and offers his hand. "Gavin Howard."

"Oh!" says Sam. She's suddenly unironically warm—a rare de-meanor for her. "You're the forest ranger. Dad's told me about you. I'm Sam."

"A pleasure," he says, then proceeds to purée my knucklebones— one of those insecure guys who has to try to destroy the other person's hand. Charming.

"This man's a national hero," Will says to me. "He's keeping our unicorns safe."

Now that is interesting. Back in the States, we've heard reports of unicorns appearing in forests throughout Great Britain. But in this age of photo manipulation it's hard to get anyone to believe anything anymore.

So I say as much: "Plenty of Americans don't think unicorns are real, you know."

"Oh, they're real, Ms. Reál," says Gavin, pleased with his wit. As if I hadn't heard that one 20 billion times.

"Americans," says Samantha. "You never think anything interesting could possibly be happening anywhere else in the world, do you?"

"We shouldn't insult our visitor," says Will. "I mean, if she were to tell us snaggletoothed pookahs started appearing in California, I sup-pose I'd want better proof than a picture." He leans to Gavin and adds, "Gabby's a reporter for The San Francisco Squint. Her column's called 'Let's Get Reál.' Two million read it every week, don't you know."

Gavin sizes me up. No, it's a deeper, more serious stare: he ap-preciates me, like a squinting jeweler. "I'm all for reality. I have no patience for falsehood. I wish more people would 'get reál.'" His voice gets weirdly sincere. The Brits share a chuckle. I don't join in.

I lean toward him and say, "Me too. My column's subtitle is 'Truth or Death.'" I smile and sip my Mule.

It's not the first time I've flirted to land an interview. Gavin drinks the rest of his beer but never takes his eyes off me. Neither do Will or the slightly-disgusted Sam, who sees exactly what's happening.

But screw her; a story's a story. Gavin sets down his glass and says the words I am longing to hear: "You know, I'm working the New Forest this weekend. If you'd like, it would be my pleasure to take you with me. You might just see a unicorn for yourself."

I thought this would make a nice fluffy piece for my column. I mean, unicorns!

Gavin—who is completely professional and hands-off, thank God—and I are having a delightful Sunday-morning hike through some less-traveled parts of the New Forest. It's everything an American could want of an English woods: fields of heath; majestic oaks and alders; rivers that run as slow as wisdom itself; and ponies! Thousands of ponies roaming feral and free like a reenactment of my girlhood fantasies.

Of course, that sets my Spidey-sense tingling. Wouldn't it be easy enough for rumors of unicorns to sprout up in a place with so many darling ponies ambling about?

This is what I am thinking when we come across a thick, almost unbroken trail of blood.

"Hornstalkers," Gavin says. And when he sees I'm not following: "Unicorn poachers. Of all the luck."

He calls it in on some last-century transceiver. HQ wants more information. They tell him to send me home and to follow the blood trail with extreme caution. "Do not attempt to apprehend them on your own," says HQ.

"I mean it, Gavin. Don't go showing off in front of your lady- friend."

We hustle through the wilderness, following a grim trail of blood, snapped branches, hoofprints and bootprints. Gavin jogs ahead, while I do my best to keep up. He's a totally different person out here, absolutely in-tune with the forest. He's half hound, loping with ca- nine abandon through this forest, then stopping suddenly to cock his head to listen, sniff the air. "I said 'Understood.'" He stows the transceiver and adds: "Wanker." And then to me he says, "Well Gabby, it's poachers. Dangerous people. HQ says I'm supposed to send you home."

It's also clear he's used to running with a high-powered rifle in- hand. He told me, as he strapped on its back-holster before we left his truck, that he was bringing it "just in case." So here we are.

He stops suddenly and crouches. I do too. From one of his cargo- pants pockets he pulls a Fey Spy, a top-of-its-class RC flying drone that looks like a green-gold robot hummingbird.

He tosses it into the air and it hovers, awaiting orders; using a controller/display-screen the size of a credit card, he sends the little drone bulleting into the forest.

I peer over Gavin's shoulder at the display and am treated to a fast- forward version of the terrain that awaits us. Gavin's a great pilot. The drone zooms and caroms through the woods with all the finesse of a real hummingbird.

And then we see them: the poachers, two of them. They wear bala- clavas and camouflage jumpsuits, the kind sporting-goods stores love to sell to amateurs.

Between them walks a little girl. A little girl on a metal dog leash.

I'd judge her to be eight or nine. She's dressed for summer, tank-top and shorts and flip-flops; she's muddy to her ankles. Her head hangs, and her hair, the colors of late autumn, curtains her face. The collar around her neck is lined with fleece. (To prevent chafing, I presume? How considerate.) The leash seems mostly a formality, however, as it has so much slack that its middle almost dips to the ground.

Gavin, slowly and evenly, says, "Some hornstalkers believe that unicorns are attracted to virgin girls. So they kidnap one to help them in their hunt."

Gavin shrugs. "One too many fairy tales when they were kids, I guess."