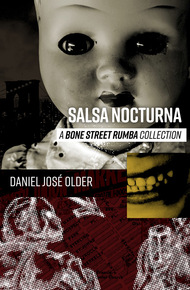 Daniel José Older is the New York Times bestselling author of the Middle Grade historical fantasy series Dactyl Hill Squad, the Bone Street Rumba urban fantasy series, Star Wars: Last Shot, and the award winning Young Adult series the Shadowshaper Cypher, which won the International Latino Book Award and was shortlisted for the Kirkus Prize in Young Readers' Literature, the Andre Norton Award, the Locus, the Mythopoeic Award, and named one of Esquire's 80 Books Every Person Should Read. You can find his thoughts on writing, read dispatches from his decade-long career as an NYC paramedic and hear his music at http://danieljoseolder.net/, on youtube and @djolder on twitter.

A 300 year-old story collector enlists the help of the computer hacker next door to save her dying sister. A half-resurrected cleanup man for Death's sprawling bureaucracy faces a phantom pachyderm, doll-collecting sorceresses and his own ghoulish bosses. Gordo, the old Cubano that watches over the graveyards and sleeping children of Brooklyn, stirs and lights another Malagueña. Down the midnight streets of New York, a whole invisible universe churns to life in this collection of Bone Street Rumba tales. Chronologically, these stories come between Midnight Taxi Tango and Battle Hill Bolero. This deluxe edition includes two new stories that weren't in the original, one previously unpublished, and a new introduction by the author.

Before Daniel José Older became a YA sensation, he wrote short stories. Salsa Nocturna collects some of his early forays into short fiction. I'm happy to note I was the first editor to publish one of Older's stories: "Tenderfoot," the tale of a ghost mammoth. – Silvia Moreno-Garcia

I remember Delton Jennings. Bumped into him pretty regularly on my late night sojourns and the guy was nice enough, if you could get past the rambling and hygiene issues. But this flattened mass of flesh, blood-crusted hair and organs? They put a name tag where they guessed the foot would've been and called it a day.

The one thing that is impossible not to notice is the smell. It's not the pee-plus-beer-plus-a quarter century of body odor combo that Delton usually rocked. It's something more animal-like. As if he'd been wrestling in a zoo and lost.

I concentrate hard, watching the air around him for those little shining satellites that tell me what's going on with folks, but nothing comes. He's already been dead at least six hours and rotting in this morgue for three, so whatever memories his corpse carried could easily have fluttered away. But then, slowly, a few flashes return. It's the sound of leaves rustling; something huge moving through the underbrush. Terror courses through me – I assume it was Delton's, 'cause I don't frighten easily. I hear a high pitched shrieking – something not human. Light bursts out of the darkness and the inside of my head turns summersaults. Then everything goes black.

I'm dizzy when I open my eyes. It's not that I'd been expecting Little Bo Peep, but dealing with this giant screeching monstrosity seems a little out of my pay grade. My creepy, translucent bosses at the Council of the Dead are gonna need to hear about all this, but there's a few more leads to check up on first.

I like to get a strong Puerto Rican coffee after I visit the morgue. It's the perfect palate cleanser for all that creepy sterility. I sip the extra-strong, extra-sweet brew out of a little paper cup as I walk up Nostrand Ave towards Eastern Parkway. I'm sure the ghostly dickheads upstairs have selected my half-dead-half-alive ass to do this job for some nefarious reason. Whatever it may be is fine by me – I have some forgetting to get busy doing, and a creepy job is the perfect distraction.

The rain keeps starting and stopping like an anxious lover who doesn't know if he should spend the night. The sky has been clouded over all day but the true evening darkness is just beginning to settle in. I finish my coffee and walk into the sloping park that's nestled between the Botanical Gardens and the library.

Brett Colson crouches like a scruffy gargoyle in his regular perch on a bench halfway up the slope. He's talking to himself, but waves at me genially as I approach.

"Bad business with Delton," I say.

It takes Brett some effort to pull away from whatever conversation he was busy with before I showed up. "Bad indeed," he finally manages.

"You see him before it happened?"

"Carlos, me and Delton been running these streets together for damn near twenty years. I seen Delton every day."

"I dunno, man." Brett fists up his face in disgust. "D disappeared one night last week, showed up again reeking like he was rolling around with some circus animals. Couldn't get the smell off him."

The smell came before he got stomped. I have some recalculating to do. "Didn't say where he went?"

"Didn't remember. But that's not so odd for Delton. Thing is though, he actually got hisself cleaned and everything at the shelter on Fulton and still couldn't get that reek of shit and death offa him. We woulda teased him 'bout it but it was all kinda creepy. Now I'm glad we didn't."

"Did you know D had a dentistry degree?"

"Yessir, went to school and everything. Had a wife and kids once upon a time too. His degree'd up ass still landed next to mine on this here park bench."

"Look how she swings."

Brett pours a swig of his bottle onto the grass and takes one himself. I wonder if Delton will turn up in the afterlife, maybe even end up back here, and keep his old drinking buddy company. You never know.

Like drunk teenagers with too much toilet paper, cops have strewn that ridiculous yellow tape haphazardly across the upper park area. I find that if I act like a real dick and scowl a lot, I don't even have to flash the fake badge that the Council of the Dead gave me – the street grunts just assume I'm some high up brass they've never met and do whatever I tell them. But I'm not in a mood to take chances, so I exaggerate my grimace, lean hard on my wooden cane and flip out the silver shield. With a few arbitrary curses thrown in for good measure the two uniforms guarding the crime scene fall right into line.

You can tell the new guys 'cause they have a lot to prove. It's written all over their faces. This one's named O'Malley and he's masking how mortified he is with an exaggerated brotherhood of cops chumminess. "What's going on, Sir?" he chuckles like we're old college buddies. "Didn't know the brass wanted in on this one."

"We don't," I say curtly. I don't like forced friendliness, especially when I'm in character. "Just swinging through for a looksee. Where's the kill spot?"

O'Malley makes a I'll-take-him-you-stay-here sign to his partner, who just rolls his eyes. I follow the kid up a winding path into the darkening underbrush. "You shoulda seen the body, man," he yammers. "It was like someone ironed him." I'm too busy trying to weed out all the new-guy excitement this guy's projecting so I can focus on the crime scene. So far though, it's just your basic city park deal: The slow pulsing of plant life arching towards the sky, a flurry of insects and the scattered frenzy of midsized mammals scurrying for trash. Oh yes: And the unforgettable aura of homelessness – that pungent, lived-in clothes desolation.

"Here we go, boss." O'Malley waves his light over a dark stain on the path. "This is where the bum got done." I scowl at him and walk up close to where Delton's blood is slowly absorbing into the cement. Forensics teams and the urban wilderness have swallowed up most of the useful details. A few candy wrappers and beer bottles lay scattered around, remnants of Delton's last supper no doubt, and a little further away there's a used condom and an old hat. None of this is particularly helpful. I take a step into the total darkness of the underbrush. It's here I realize that there's something else odd about the park tonight. It'd been bothering me since I stepped in but I couldn't put my finger on it, like a humming you don't notice until it stops. There's no ghosts here. Usually any city park hosts a whole cross section of spirits. This park's particularly alive with the dead; you can see 'em fluttering in their strange circles like glow bugs anytime after sunset. Well, I can anyway. But tonight, it's like an empty school house. A silence so deep it curls up inside my ears.

Then, all at once, I'm inundated by a rush of thick, pungent wind. The trees around me tremble and send up a mournful shushing. Back on the path, O'Malley shifts his weight uneasily from one foot to the other. The leaves convulse more frantically. I hear the snapping of branches. Something huge is moving very quickly towards us.

I smell it before I see it; that same old-feces-circus-tent stench from the body. O'Malley yells and I duck as three gunshots ring out behind me. There's a flurry of motion – the huge, fast thing lets out its deafening shriek and thunders towards us. It's only a fuzzy flicker – tall as a two story building, long matted hair and all shiny transparent like a jellyfish. It bursts out of the trees and knocks me on my ass.

For the first year after my death, I got the heebie-jeebies each time I rolled up on some runaway spook. In time, I got used to it, and I haven't felt much of anything for quite a while. This situation, on the other hand, has reached some place deep inside of me and crushed all that cool-headed resolve. Find out what's going on, the Council message had said. Okay, I found out: There's a huge hairy freak show in the park. Done. I hear that inhuman shriek mixed with the wet crunching sound that's probably the end of Officer O'Malley. I don't look back, don't think. I just run. I don't stop running 'til I reach my friend Victor's spot in Crow Hill. I ring the bell until I collapse in a heap on his doorstep and only then do I realize I'm bleeding.