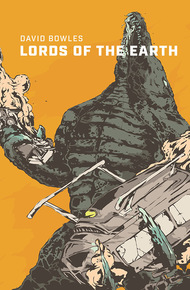 Recipient of awards from the American Library Association, Texas Institute of Letters and Texas Associated Press, Mexican American author David Bowles has written fourteen books, including the Pura Belpré Honor Book The Smoking Mirror, Chupacabra Vengeance, and Feathered Serpent, Dark Heart of Sky: Myths of Mexico (one of Kirkus Reviews' Best YA Books of 2018). 2018 also saw the publication of They Call Me Güero: A Border Kid's Poems (Honor Book for the 2019 Walter​ ​Dean​ ​Myers​ ​Award​s ​for​ ​Outstanding​ ​Children's​ ​Literature). In 2019, Penguin will publish The Chupacabras of the Rio Grande, co-written with Adam Gidwitz. and Tu Books will release Clockwork Curandera, a steampunk graphic novel illustrated by Raúl the Third. David's work has also appeared in venues such as Apex, Nightmare, The Dark, Eye to the Telescope, Strange Horizons, Journal of Children's Literature, Translation Review, and Rattle. In 2017, David was inducted into the Texas Institute of Letters in recognition of his literary accomplishments.

Lords of the Earth by David Bowles

After four billion years, they have emerged.

When the volcano Popocatepetl erupts, a massive, reptilian monster crawls out of the caldera and begins attacking Mexico City. Unable to stop it, the military calls on Elena Baz, a disabled physicist who consults with the Mexican Army. Dr. Baz gathers a team of the greatest scientific minds, searching for a way to bring the behemoth down. But as the kaiju leaves a swath of destruction across Central Mexico, other volcanoes grow more and more active. Now the nation's only hope lies with Alfonso Becerra, an indigenous anthropologist with radical fringe ideas. Elena and Alfonso will have to overcome their personal traumas and long-standing feud in order to work together. For only a blend of science and myth can save Mexico from the ancient Lords of the Earth.

David Bowles is, to say the least, eclectic. Although he has published several children's and YA books, he has also translated Aztec and Mayan poetry, and published many short stories. With Lords of the Earth he tries a new sub-genre: the monster adventure. – Silvia Moreno-Garcia

A whistling groan filled the air, a sound like bombs falling.

Alfonso pivoted toward movement that he glimpsed out of the corner of his eye.

A bright red Metrobus came screaming out of the sky at impossible speeds. Alfonso jumped back just as the rapid transit vehicle slammed into the blacktop, ripping up huge chunks of asphalt and hurling them against buildings and cars as it bored into the street and then flipped over, completely crumpled and mangled. Body parts were flung free, landing up and down the block with gruesome, squelching thuds.

A harrowing, cavernous snarl echoed deafeningly all around.

Glancing up, Alfonso saw—high above the rooftops several blocks over—a massive and monstrous head moving along Insurgentes Avenue. Vaguely reptilian, it was covered in jagged, spiny chitin that continued down over what he could see of its torso. The uneven plating suddenly glinted blue as fire from a passing attack plane spat bright yet ineffective against that impossible flesh.

The plane wheeled through the sky, circling the invading behemoth and preparing for another barrage. But a great taloned fist came swinging in a perilous arc and batted the aircraft into a sprawling music store, where it exploded with a concussion that was quickly drowned out by the beast's bone-rattling howl.

Alfonso's phone buzzed in his hand. A text message. Opening the application with a trembling finger, he saw that there were dozens from friends, colleagues, relatives.

condesa under attack! stay away from insurgentes!

reports say moving from coyoacan to cuauhtemoc so be safe!

if you're still in mexico city get the hell out now

amecameca razed to the ground!

seen this monster that came out of the volcano? remind you of something?

That message, one of the first to come through, was from a number he didn't recognize. There was an image attached, a photo of a ceramic figurine from Xochicalco with which Alfonso was very familiar.

The newest text was from a colleague, Ruth Garibay, whose initial work in Toluca was the basis for the new proposed dig.

Alfonso stared at the picture she had attached for some thirty seconds before reading her note.

been sitting on this for a year worried about blowback—not the first one, Poncho.

His mind reeling, he reviewed the previous messages, which provided a patchwork of information that he wished he could confirm on news websites, but the passage of the behemoth and likely multiple calls for aid were overwhelming the nearby cell towers. From what he could piece together, however, the giant reptilian thing had emerged a few hours ago from a huge stone cocoon in Popocatepetl and had since made its way into Mexico City, razing everything in its path.

Alfonso's eyes glassed over as he stared at the wreckage in the street without registering the sheer carnage that the mangled steel and flesh hinted at. His mind was whirring.