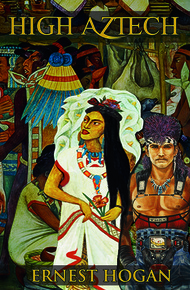 Ernest Hogan was born in East L.A. Back in the Atomic Age. His mother's maiden name is Garcia. Most of his childhood and adolescence were spent in West Covina, California. He has climbed pyramids from Tenotihuacán to Chichén Itzá. Besides his Chicano family, monster movies, comic books, and science fiction formed (some would say warped) him. Some call him the Father of Chicano Science Fiction because of his novels, High Aztech, Cortez on Jupiter, and Smoking Mirror Blues, and works that have appeared in Amazing Stories, Analog Science Fiction and Fact, Aztlan: A Journal of Chicano Studies, Mothership: Tales from Afrofuturism and Beyond, and other publications. He blogs at labloga.blogspot.com and mondoernesto.com. A collection of his short fiction, Pancho Villa's Flying Circus, is forthcoming. He lives in Arizona, with his wife, Emily Devenport, author of Medusa Uploaded.

In mid 21st century Mexico, Tenochtitlán, the metropolis formerly known as Mexico City, is the most exciting place on Earth. Stainless steel pyramids pierce the smoggy sky. Human sacrifice is coming back into fashion, especially on the new Aztechan TV channels, and everyone wants an artificial heart. Xolotl Zapata, celebrated poet, skeptic and trmrhsfr journalistr, starts receiving death threats from a cult he's lampooned in a comic book. But soon he will have much worse problems and be running for his life. The government, the Mafia, street gangs, cults, terrorists, even garbage collectors will be after him. Why? He has been infected with a technological development that will changing human life as we know it Zapata is carrying a virus that can download religious beliefs into the human brain - a highly contagious virus that is converting everyone he meets, and everyone they meet, to the Aztec religion. This is Witnessing with a PUNCH! Since he's a virtulent carrier he infects a large part of the city all by himself, and the masses, filled with visions and portents, await the End of the World.

Ernest Hogan is known as the father of Chicano sci-fi, a moniker that he earned thanks to the publication of High Aztech, which has become something of a cyberpunk underground classic. – Silvia Moreno-Garcia

It was a relief when they kissed my hands goodbye. Those were long, hard kisses, through which they seemed to be trying to suck more of the virus out of me. By the time they went away I wanted to touch and kiss them.

The only person within reach was Patiyonena, so I took hold of her shoulders, pulled her to me and kissed her on the neck, just below the jawline.

She didn't pull away, but said, "Look, Xólotltzin, please, talking to my parents always gets to me. I'm not feeling very well―I mean emotionally." Then she kissed me full on the lips. "I guess what I want to say is I'm not really in the mood for this."

"Yes, the holy virus makes you do things, sometimes you can't figure it out. The gods work in mysterious ways."

"Like Tezcatlipoca's trickster business." We stared at each other awhile. She looked exhausted, I probably looked the same. "So what do we do now?" I asked.

She snapped into a burst of nervous energy. "Ay! I forgot! I made reservations for us at the Pyramid View for lunch! We're late already! We better go!"

So she rushed me out. We made an uneasy, mad dash through the hall to an express elevator that asked for a look at her tattooed thumb before it took us all the way to the fabulous restaurant on top of the High Aztech Building where a polyglass pyramid-shaped roof gave us a view of the New Pyramid and the city lights under the starless sky. The hostess dressed and made up like Lady Tenochtitlán showed us to our VIP table; I thanked her and said a brief prayer.

As the waiter brought us servings of fiesta-style humanoid tacos, Patiyonena started to talk: "It's all so cuallioso, but, well, I have to talk to you about something."

"Go ahead," I said, picking up a taco, looking at it. You couldn't tell by the way it looked that it was grown from synthesized human DNA.

"Well, I think my parents expect me to marry you, because of the holy virus and all this stuff."

I barely knew this crazy chicatl, and didn't really want to marry anyone. A vision of Cóatliquita passed through my mind. But I said, "That's cuallioso."

"I think it's cuallioso, too. It's just that before you came along they hinted that if I behaved they would let me meet and marry El Brujito."

"So?" I said, finally working up the courage to take a bite of taco, remembering that since it didn't come from an actual human being, it wasn't cannibalism, but since it was genetically the same, it was like participating in a time-honored Aztecan ritual.

"Well, I never actually met El Brujito―not in person―but he's my favorite star. I love his music and think about him all the time―I even dream about him."

"He's almost a god to you." I was suddenly overcome with the desire to take part in a genuine Aztecan ritual, to eat real human flesh.

"Yes, but what I was thinking is, if we get married, my parents would give us a lot of things; we would never have to worry―they may even decide to let us have artificial hearts!"

"Cuallioso," I said, even though I really despised that word by now. I continued to eat my taco. And then remembered something good, old Itzcóatl once said: If you don't acknowledge the cannibal inside you, he'll come out and take over when you least expect it.

"Exactly, but I was wondering, if we got married, and I had a chance later to meet El Brujito and even have an affair with him, would it be all right with you? I'd even let you have an affair if you wanted."

"I don't see why not; I'm a reasonable man," I said. It all seemed so logical.

She smiled, reached across the table, took my hand and said, "Thank you, Xólotltzin! It's all so cuallioso!"

A waiter then came and said, "Excuse me, sir, but Tenyotecuhtli and Tenyocihuatl want you to have this."

It was my zumbador. I carefully cleaned my hands before touching it. When I picked it up, it was as if it were a sacred object.

The part of me that was growing weaker and giving up its fight against the virus wanted to put it on the maximum flesh-shredding setting and try to push it through my skull into my brain. But that part of me was too weak now. I couldn't tell my own thoughts and feelings from those that the virus gave me anymore.

All I could do was hold my weapon, like a warrior. "Yes Patiyonena," I said, "it's all so cuallioso!"