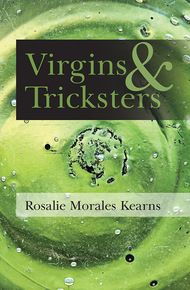 Rosalie Morales Kearns, daughter of a Puerto Rican mother and Euro-American father, was born in Pennsylvania. Her story collection Virgins & Tricksters (Aqueous, 2012) includes the story "The Associated Virgins," which received a Special Mention in the 2013 Pushcart Prize volume. Her novel Kingdom of Women (Jaded Ibis, 2017) was praised by Kirkus Reviews as "a daring critique of today's patriarchy" and "a bold, politically minded tale with a spiritual soul." Kearns is also the editor of the anthology The Female Complaint: Tales of Unruly Women, described by Kirkus as a "vital contribution to contemporary literature." In addition, she's the founder of the feminist publishing house Shade Mountain Press and creative prose editor at WSQ: Women's Studies Quarterly. Kearns has an MFA from the University of Illinois, and has taught creative writing at Illinois and the University at Albany. More information is on her website, https://rosaliemoraleskearns.wordpress.com and on her Twitter feed, @RMoralesKearns.

Virgins & Tricksters offers twelve subtly subversive stories with settings as varied as an unnamed Caribbean island, a post-apocalyptic state forest in Pennsylvania, and tenth-century England. In "The Associated Virgins" (a Pushcart special mention in 2013), dozens of tiny statues of the Virgin Mary scold a nonbeliever. The Devil shows up in a woman's living room to make an interesting offer in "Sharon Thinks It Over"; and presides over an alternate heaven for life's losers in "Devil Take the Hindmost." Characters include ancestral spirits and exiled revolutionaries, indentured servants and deposed deities. Marge Piercy praised the collection for its "succinct, smart tales rooted in and rooting around in a female-centered spirituality." Originally published by Aqueous Books in 2012, the collection was re-released by Guayacán Press in 2017.

Virgins & Tricksters focuses mostly on women and their experiences, and places itself in the territory carved out by magic realism authors such as Isabel Allende or Gabriel García Márquez, with the mundane and the fantastical overlapping. – Silvia Moreno-Garcia

The Incident, as we'll call it, gave Elihu Wingate a few weeks of notoriety among his fellow psychologists. We know it's hard to imagine, a gentle soul like Elihu Wingate the object of gossip up and down the West Coast.

Try to throw a colleague off a cliff, and this is what happens.

Of course, we exaggerate. Gossip is always more colorful than truth, though the real version of events also contains a cliff-like structure, and the two men scuffling at the edge of it. We'll get to that later.

You've seen articles like this, in The New Yorker, The Atlantic, Harper's. The reporters follow the same arc: Ordinary Life Builds Up to Dramatic Incident. The incident isn't described right away. The article hints at it, works up to it, maybe opens with a vignette of an ordinary day in the subject's life, before everything changes.

On a typical morning Elihu Wingate drives downtown to his office in a charming little turn-of-the-century building. He greets colleagues, researchers and secretaries, custodial staff and accountants. He sits at his computer in his corner office, studies data, writes reports, plans his business trips.

Elihu Wingate is an expert on the psychology of consumer behavior. This means that corporate managers everywhere, no matter what their product—lawn mowers or tax preparation services, flea collars or gourmet chocolates—want to hear what Elihu Wingate has to say.

After work, Elihu Wingate drives home to a pleasant suburban development called Mountain View Estates. He has developed a post-divorce routine in his enormous, post-divorce house. He makes a salad, grills some salmon or halibut. He sits out on the patio sipping iced tea.

There's no winter to speak of in this part of California. If we'd installed a surveillance camera on the patio and reviewed the film on fast-forward, the only change in the long stationary blur of Elihu Wingate on his deck chair would be from short sleeves to long sleeves, iced tea to hot tea.

Even the breaks in his routine are routine. Elihu Wingate's two daughters, Iris and Orchid, are there most weekends, and then the surveillance camera would catch more motion, a larger blur and two smaller blurs playing badminton or frisbee, or jumping in the pool.

As the sun sets Elihu Wingate washes his dish and glass and cleans the grill. He goes upstairs. He checks his email.

He checks the junk mail box.

He opens his favorite online video game, where he's a test pilot for top-secret military planes. He forgets to check the fuel gauge. The plane crashes.

He tries a game he just bought this weekend. He's an FBI agent creeping through a labyrinthine abandoned building, trying to get the bad guys before they get him. He's shot by a villain who looks to be twelve years old.

Elihu Wingate turns off the computer. He reads psychology journals in bed until he falls asleep.

There are warning signs before the Incident, to be sure. Months before, maybe years. Little fissures opening up in the smooth, tranquil surface Elihu Wingate presents to the world.

It hasn't been easy to get the facts. Psychologists are protective of their own. Most likely they're afraid the whole melodramatic episode reflects badly on their profession. Or maybe they pity Elihu Wingate.

"Such a nice guy," they keep saying.

"Elihu's a genius," his colleague Dan Keegan likes to tell people. "The brains of the operation. I just handle the practical stuff."

In his booming voice Dan Keegan will list his colleague's accomplishments. You'll learn more than you thought you wanted to know about things like counterfactuals, upward comparisons, downward ones, and Elihu Wingate the first psychologist to talk about these concepts seriously.

"And there's his research on regret," Dan will tell you. "Never even occurred to anyone before Elihu that regret could be a positive thing. Changed the field. Now everyone's studying regret, hindsight, all that stuff."

Lumbering Dan Keegan, he of the thinning hair and thickening paunch, may seem an unlikely cheerleader, but no mere pom-pom girl could match him in enthusiasm, loudness, and sheer size.

"Then he started relating all that to consumer behavior," Dan will say. "Figured out how regret factors in to negotiating strategies."

He gets excited at this point, leans over, mimes a friendly punch on your arm and you feel like you've been cuffed by a bear.

"Have you heard his newest thing? Jury research. How hindsight affects juries in liability cases."

"So what's his secret?" you might ask as you move out of thumping range.

"Damnedest thing," Dan Keegan will say. "People tell him stuff they won't say to any other interviewer."

If you can imagine the opposite of the glad-handing Dan Keegan, Elihu Wingate is it. Quiet, lean as a runner, dark expressive eyes with a touch of befuddlement. People instinctively sense that Elihu Wingate is the last person in the world who would ever make fun of them. So when he asks those boring interview questions ("What factors led to your decision?" "How do you feel about your decision now?"), they don't just blurt out whatever occurs to them, they think about the question, remember more details. Whole other topics come to mind they never would have mentioned to someone else.

They agree to all kinds of tests: skin temperature, blood pressure. It's always the people who talk to Elihu Wingate who volunteer to take MRIs, EKGs, even spend entire nights in the company's new sleep lab, where their brain waves travel down electrode wires and turn into lines on graph paper, and Elihu Wingate, they're sure, will make sense of it all.

It's almost time to leave work. Elihu Wingate is alone in his large, sparsely furnished office. Late-afternoon sunlight is streaming through the windows, and Elihu Wingate is watching the light and starting to feel an odd sensation, like he's outside himself, or larger than himself. He feels a sense of oneness with the old building, an awareness of its granite-and-glass skin. Through the soles of his feet he can feel the foundations of the building rooted in the earth.

Elihu Wingate has no words for this experience. He is a scientist, and scientists know that people and buildings do not commune with one another.

He tries to hold the feeling at arm's length, study it—a symptom of anxiety? depression?

Dan Keegan sweeps in with the quarterly profit statement and sweeps out the weirdness, and Elihu Wingate relaxes into the familiar—columns and numbers, his colleague thumping him on the back and calling him ridiculous things like "champ" and "sport."

"We're rolling in it, guy," Dan Keegan says. "This new jury hindsight stuff—pure genius. What these law firms pay you for consultant fees, you could buy another house, cash down."

"Or get yourself a boat, old boy. Help you relax, crank out the next money maker."

Elihu Wingate knows that Dan is probing him for a new idea. Dan will try to convince him to keep it to himself, give Dan time to figure out all the money angles, keep Elihu Wingate the only expert for as long as possible.

But Elihu Wingate has never been this way. Before he publishes results, before he even crafts a study, he likes to float ideas—What if we don't assume regret is a bad thing? What if we ask consumers about their purchases a month later? A year later? Moments before? What if we look at how hindsight works in jury decisions?

Don't judge Dan Keegan too harshly. Sure, he's got an eye on the bottom line, like any good businessman. We can't all be sensitive and thoughtful in this world. Where would we be then?

Let us tell you about Dan Keegan. Dan's the kind of guy who'll take you out fishing in his boat, and when you try to keep up with his beer drinking and fall over the side, Dan will lean over and lift you back in, rub you dry with a big towel, and offer you another beer to warm you up inside. He's that kind of guy.