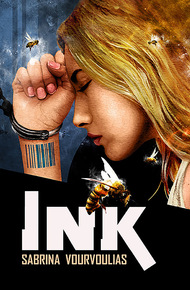 Sabrina Vourvoulias is an award-winning Latina news editor, writer and digital storyteller. An American citizen from birth, she grew up in Guatemala during the armed internal conflict and moved to the United States when she was 15.

Her news stories have been published at The Guardian US, Philly.com, Public Radio International's Global Voices, NBC10/Telemundo62, Philadelphia Weekly, Philadelphia Magazine, City and State PA, and Al Día News, among others. Her short fiction has been published by Apparition Literary, Apex, Crossed Genres, GUD and Uncanny magazines, and at PodCastle, Tor.com and Strange Horizons, as well as in multiple anthologies.

She lives in Pennsylvania with her husband and daughter.

Her name is Mother of Exiles.

From her beacon-hand glows world-wide welcome.

Give me your tired, your poor, your huddled masses.

Send these, the homeless, tempest-tost to me.

America has lost its way. The strongest of people can be found in the unlikeliest of places. The future of the entire country will depend on them.

All across the United States, people scramble to survive new, draconian policies that mark and track immigrants and their children (citizens or not) as their freedoms rapidly erode around them. For the "inked" — those whose immigration status has been permanently tattooed on their wrists — those famous words on the Statue of Liberty are starting to ring hollow. The tattoos have marked them for horrors they could not have imagined within US borders.

As the nightmare unfolds before them, unforeseen alliances between the inked—like Mari, Meche, and Toño—and non-immigrants—Finn, Del, and Abbie—are formed, all in the desperate hope to confront it. Ink is the story of their ingenuity. Of their resilience. Of their magic. A story of how the power of love and community out-survives even the grimmest times.

Ink is a near-future tale of a dystopian United States where biometric tattoos allow the authorities to track immigrants. It's re-release last year is, to say the least, eerily timely. – Silvia Moreno-Garcia

The source texts me.

All my sources text me these days. Or send me pictures and videos they've taken with their cell phones. The rich ones have smartphones; those with just a little money use pay-as-you-go phones. Doesn't matter to me, as long as the message gets through and the image is clear.

Most journalists have a sixth sense. So even though the message I'm looking at is bare of story, it makes the hair on the back of my neck stand up. It's going to change everything.

My source is an ex-girlfriend. Long legs, even longer memory – which works to my advantage in this case. Political dreams as bright as her copper hair.

Not that our dreams have gotten us very far yet. I'm at a small daily in a market that hardly registers a blip in the national news cycle; she's on the communications team of a first term congressman who's greener than mint chocolate chip.

But luck is better than dreams any day. And both she and I have always been lucky. Lucky to fall in with each other at college, lucky to fall out in a way that kept our friendship intact. Lucky that Rep. Anspach ended up part of the subcommittee reviewing the identity bill.

She doesn't text me from her official phone but from an untraceable throwaway.

I wend my way to Melinda's desk after I get the specifics. The Hastings Gazette newsroom is huge – proof of days when even regional newspapers were flush with advertising dollars – and the managing editor's desk is smack in the middle.

She tears her gaze from the twitterfall she monitors for stories.

Melinda's eyes are the same shade as her steel wool hair, and about as soft. "I'm busy, Finn."

I sit on the edge of her desk. "Anything interesting?"

She snorts. "Like you haven't been trolling all morning."

"Are we going to break a story?" It comes out growly. Which means she's already feeling the bite of adrenaline. See? Sixth sense.

"I don't know. You see anything there about the identity law?"

Her eyes flit back to twitterfall.

"The usual. Rehash. Opinion. Speculation. How long before you can post?"

"Which means you've got less than fifteen minutes before the rumors hit the fall. Sources?"

"One. Unnamed, but inside."

She expels a breath. "Shit. Every time we run a single-source story I die a little."

"Confirmation or jump on the competition. You can't have both."

It's hard to believe Melinda's eyes can get steelier, but they do. "So what's your fat butt still doing on my desk?"

I'm grinning all the way back to my desk. She knows I'll file the story in less than ten minutes – in plenty of time for our web dweebs to work their sleight of hand so not even the most aggressive aggregators can steal it without driving our web traffic into the stratosphere.

I should have played football. People expect six-foot-eight, 280-pound men to do that. Nobody expects them to spend all their time tackling stories.

I majored in creative writing at college. Cassie says it's our mother's fault: if you're named after mythological characters you're bound to live in fantasyland. But I graduated into a world of facts. There's no mythic journalism, at least not in the hinterlands where word counts hover around 500 and city council is the top beat. Still, it's steady work with words and a regular paycheck, no matter how laughable.

We're all living in fantasyland anyway. My sister thinking she'll keep her small town library open. Melinda believing newspapers are still vital. Me imagining there's always a story or two lurking behind the facts. And then there's the inks, hoping the identity bill will never come up for a vote. Magical thinking, all of it.

I can't remember when we started calling them inks. After all, it isn't until now it's certain they'll be tattooed when they enter the country. Actually, unless I'm misreading the soon-to-be-law even the permanent resident and citizen inks will end up with tattoos, with a color scheme to indicate terminal status.

I lean back a moment and stare across the newsroom while I consider how to best shape the lede. There isn't a single ink in the Gazette's newsroom, never was. Even at the big papers there hadn't been a glut of them. Melinda catches me looking around and glares at me. They must teach that look in journalism school because all my cohorts go silent and lean into their monitors as if to convince her they haven't been goofing off.

Me, well, I keep smiling. I'm her favorite reporter even though I haven't seen a day of j-school. I file the story a full five minutes before she expects it. She edits it in two. A minute after the new media dude gives us the thumbs up, we watch as my lede floods the fall.