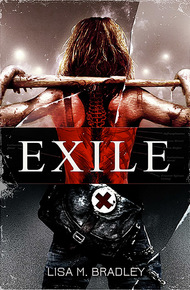 Lisa M. Bradley is a Tejana who has lived in Iowa for half her life. She grew up in deep South Texas, before the construction of the Border Wall. Not coincidentally, she writes about boundaries and those who defy them in works ranging from haiku to novels. Her work regularly appears in journals (Strange Horizons, Uncanny Magazine, Polu Texni) and anthologies (The Moment of Change, Sunvault, theRhysling Anthology). Her first collection is The Haunted Girl from Aqueduct Press. Her first novel, Exile, is forthcoming from Rosarium. In articles and conference presentations, she honors the often-overlooked speculative elements in work by Latina poets, including Gabriela Mistral, Sara Estela Ramirez, and Alfonsina Storni. For more information, including a selected bibliography, see her website: www.lisambradley.com.

Twenty years ago, a toxic spill in the small, southwest Texas town of Exile poisoned residents with permanent rage. The feds' response? Quarantine. Only residents who pass the feds' 4-S test can escape Exile's heavily fortified borders. Heidi Palermo, unwilling medic to her family of bloodthirsty street warriors, has taken the test repeatedly, trying to prove she's smart, strong, sterile, and sane. Three out of four ain't bad, but the feds don't grade on a curve.

When her abusive brother dies in battle, Heidi turns her clinical eye to his killer. An Outsider who arrived post-spill, Tank seems open to Heidi's advances. Is Tank her ticket out of Exile? Before she can find out, the two are besieged by her vengeful family. Heidi must keep their blood feud from triggering a war with the feds if she wants to escape Exile. But Tank's about as trusting as Heidi is monogamous—which is to say, not at all. So Heidi's picked the wrong mark, her family is gunning for her, and the feds are itching to nuke Exile once and for all. Heidi's got her fourth S now: Screwed.

Lisa M. Bradley's Exile is another dystopian novel focusing on a town despoiled by a chemical spill and quarantined from the rest of the world. Gritty and full of action, this is a fast-paced, intriguing book that explores the edges of rage. The book is new this year, I hope you'll keep it in mind when reading for 2019 awards. – Cat Rambo

The man had beheaded my brother. I couldn't stop imagining it as I sat nearly recumbent in the passenger seat of his steel-gray Stingray.

Tank ignored my inspection, avoided even glancing my way as he drove us to Mute's Roadhouse out on Maiden Lane. Before the Spill, Maiden Lane had been a quiet cul de sac; now it was more bottom of the bag than ever, despite being in the Outer Radius. Still, getting there didn't require half the concentration Tank was faking. He'd designed Mute's, had gotten down and hauled sheetrock and hammered nails with the sulking townies Mute arm-twisted and blackmailed into working. Tank had even blacktopped the parking lot, raked that stinking asphalt soup in the middle of an August night. So he knew where Mute's was and how to get there. He just didn't want to look at me or my blue mini dress or the line of my thighs pressed together.

Maybe I scared him.

He pulled into the parking lot, headlights glitzing off the rhinestone and spangles of the hooker promenade in front of Mute's. The tires crunched over broken beer bottles, and I winced in spite of myself. Sure, Tank was an Outsider, but he'd been in town three years, plenty long enough to have puncture-proof tires. Even so, a 1970 Corvette Stingray coupe deserved better.

Tank must've been checking me out because he caught my flinch, mistook it for fear. "You sure you want to do this?" His craggy voice filled the small space, deeper than the Stingray's muted engine.

This? I looked across the lot bleached by floodlights, watched couples emerge from the shadows alongside the roadhouse to scope us out. This: appear in public with my brother's killer, burn the last bridges to my family, spray paint my suicide note in letters six feet tall.

I took a deep breath, inhaled the sandalwood spice coming off Tank. "I'm sure," I said, unbuckling my seat belt. "Are you?"

He didn't say anything. Didn't have to. Uncertainty cocked his jaw—an eight on Luciano's American masculinity scale, I decided. But he got out, met me in front of the sleek silver beast, and escorted me through the gauntlet of leaning motorcycles to Mute's door. His hand didn't quite touch the small of my back, but I felt its heat. And the answering heat on my cheekbones, the hollow of my throat. The hooker crew chiefs paused negotiations to marvel at Tank, then dropped their gazes to me. Tank and I nodded as we passed through their beer-and-blunts miasma.

Inside, the jukebox blared The Doors' "Peace Frog." No one noticed our entrance, but the moment Tank started crossing the sawdusted floor, the crowd parted for his immense form. And then the whispers started, audible even over The Doors. The roadhouse felt bigger inside than out, and it was packed with people who knew me, knew my brother, knew my brother's killer. My skin tingled. Mute's was one of Exile's only no-kill zones—that's why, when I'd propositioned him, Tank had insisted we have our "date" here; that, and Tank had some arrangement with Mute—but that was small consolation with everyone eyeing us like steaks. The street wars whet powerful appetites.

Tank ignored the crowd's gawking more convincingly than he had my staring. He guided me along a curving honey weiss wall that divided the bar from the dance floor toward a spiral staircase that looked like the bastard of a conch shell and a baby grand piano. Black, gleaming, and pearlescent, the staircase embraced us, buffered us from the riffraff. Even so, I had to concentrate as we ascended the polished treads; I was wearing newish fuck-me pumps, and vibrations—Tank climbing behind me, The Doors' mad organ music—funneled up my already trembling legs. Then we reached the surreal stability of the Guinness-black mezzanine. It jetted glassy, seemingly unsupported, over the muffled dance floor.

We sat at Tank's table—off-limits to anyone else—and a little breathless, I peered over the edge of the mezzanine at the dancers below. Plenty looked, stared, glared right back. A knot of warriors, part of my dead brother's crew, muttered near the bar. Their new leader, Chazz, bared nicotine-stained teeth at me and grabbed his crotch. I turned back to Tank. Studying me, he hadn't noticed Chazz's threat.

"So how does this …" I gestured around at the mezzanine, not needing to shout, the jukebox acoustically squelched. "How does it not crash down onto the dance floor?"

He gave me a longer answer than I expected: ksi yield requirements, seismic loadings, psf live loads, and I don't know what else. Most people would've been running off at the mouth, nervous. He, however, was one of those no-bullshit characters who assumed that if you asked, then you really wanted to know. When he finished, his mouth squeezed up. Not a smile exactly, more like a facial shrug: ripple of the zygomatic major, slight pucker of the incisivi labii, no movement of the orbicularis oculi.

"I don't know what you just said," I admitted. "But I think I get the gist. It's physics."

We sat eyeing one another, silent, for a couple of minutes. He knew that I knew that he'd murdered my brother William. Hell, the whole town knew. You can't race down a residential street on your motorcycle swinging an ax at people without somebody taking notice, even in Exile, even during a street war. I looked away.