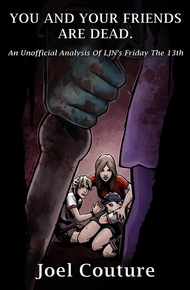 You and Your Friends Are Dead by Joel Couture

This was Friday the 13th on the NES, a game frequently panned for being clumsy, incomprehensible, and far too hard.

And almost every modern horror game owes it a debt, whether they know it or not.

The NES Friday the 13th broke new ground in horror, establishing the use of confusion and nebulous rules to create a compelling mystery. It created pressure and despair through its clever use of hidden items, keeping players from becoming too powerful. It also created a powerful stalker in the form of Jason, using his power and shocking appearances to pave the way for the relentless monsters that would haunt our playthroughs of Amnesia, Resident Evil 3, Clock Tower, and more.

Despite its hated reputation, Friday the 13th established trends back in 1989 that would continue to shape horror to the present. It would also ask questions few other horror games would dare. Should horror be pleasant, or should it crush us with fear and hopelessness? Can we make lives truly matter in the disposable existence of a video game?

Featuring interviews with journalists and game developers of various disciplines, "YOU AND YOUR FRIENDS ARE DEAD. – An Unofficial Analysis of LJN's Friday the 13th" is an attempt to break down the various horror elements of the game and how they make Friday the 13th into a misunderstood masterpiece, and one of the most important entries in the genre.

LJN catches a lot of flak from retro enthusiasts, and often for good reason, but the atmosphere of Friday the 13th on NES was incredibly immersive and equally terrifying, even in only eight bits. Couture does a tremendous job explaining the charms and pitfalls of one of the console's more notorious games, as well as the sense of foreboding that steals over players as the horror industry's favorite hockey-masked monster picks off their friends one, by one, by one. – David L. Craddock, curator, StoryBundle

"It all takes place out at Crystal Lake. That pleasant little camp where happy children of all ages go to spend a fun-filled summer…but this summer will be different. The fun will have to wait. Jason has decided to come to camp and terror is the only game they'll be playing."

Maybe you know those words from the back cover of Friday the 13th for the NES. Or maybe you're more familiar with:

"YOU AND YOUR FRIENDS ARE DEAD. GAME OVER."

Friday the 13th is a unique NES title. Back when we were shooting robots, stomping turtles, and whipping medusa heads, Friday the 13th had us throwing rocks at zombies and bats. Well, that and scrambling around a campground as we struggled to keep our friends alive, fighting for whatever weapons we could find, and dying at the hands of a familiar slasher movie villain.

Jason is not exactly known for his gentle hand and kind heart, is he? The killer often made short, gruesome work of a bunch of teenagers before each of his many movies were done. So, when the time came to make a video game out of the films, what do you think the developers were going to do? Make an action game where you fought spooky things at the end of each level until you finally faced down the killer in a brutal showdown (The NES A Nightmare on Elm St did that, actually. I like that game a lot, too!)?

Friday the 13th didn't go down that road. Instead, it placed the players in a sprawling campground and asked them figure their way around. It had them rushing around it as their fellow counselors found themselves under attack in their own cabins, or running to save the young children who were in danger in their safe haven on the lake. It had them plunging into caves and woods to find items they could use to keep themselves alive while under siege from a relentless killer.

And when you finally found Jason (or, more likely, he found you), he was far more than most would be prepared for. He hit hard, downing even the strongest counselors in a few blows. He hit like a final boss, except he might just run up to you about a minute into the game and stomp you flat. He could come at any time, and only grew more powerful as you beat him.

He was everywhere. You were never safe. And you had no idea how to find weapons, or what you were supposed to be doing. You were just struggling to survive, praying that you found some means of doing so. You were fighting to just think for a minute. To find some way of overcoming his overwhelming power. But he never let up, and even if you fought him off, within moments you'd be dealing with another attack.

Friday the 13th captures the spirit of being a teenager in one of the movies. It seeks to give the player that feeling of vulnerability a teen in a horror movie would feel.

This was new to the NES at the time. Many of the great games during this period were sidescrolling action titles (although there was some truly wonderful experimentation done on the console), so they seemed like the smart product to make. A lot of movie tie-in games from the late 80's and early 90's went down this road. Total Recall. Robocop. Karate Kid. Ghostbusters II. Batman. Wayne's World (shudder). The list goes on. While there was some neat innovation in some of these, most of them were straightforward action games, seeming to draw upon what players enjoyed at the time.

Friday the 13th wanted to be different. It wanted to explore the feeling of being under attack from a killer you have almost no chance of beating. It didn't want to make the player into another movie hero in a sidescroller, having them fight enemies and bosses until the game's end. It wanted them to experience the kind of fear that comes from being underpowered and faced with overwhelming odds. It wanted you to soak in the sensation of being attacked by an unfair opponent. To feel the despair settle in when it all seems hopeless.

This unique sensation didn't exactly go over well with everyone who played it. It does run counter to the power fantasy that fuels many sidescrollers. Many come to games to be the tough hero, and even if the play itself is challenging, you want that sensation of strength. You want to be powerful and overcome, or at least get the sense that you could overcome if you'd only start playing a little better.

Also, Friday the 13th is not afraid to confuse you. Make you feel small and insignificant. To grind you up whether you've had enough time to prepare or not. It does not care if you know how its items work, where to find them, or if you know how to get around. It doesn't worry about what the player feels, or if they know what to do or where to go. It just throws them into an unbalanced situation and tells them to deal with it.

This feels unfair, and counter to fun, but should horror always be a great time? Would you say that you enjoy being stalked and gutted? That you love hiding out in a closet, frightened out of your mind? Horror, sometimes, isn't fair, and it isn't fun.

Should a game that emulates being stalked by a slasher villain be fun, though? If a game were to truly capture the spirit of being chased and attacked by supernatural killer Jason Voorhees, would it be a ripping good time? Or, to actually emulate the movies, would it have to sow panic and confusion, keeping the player off-guard, afraid, and unsure what to do?

Except, it is fun. If you're willing to give yourself over to it for a while, Friday the 13th offers a compelling horror experience, especially for its time. It offers an emotional journey, and the kind of satisfaction one can only find from cracking a mystery while someone keeps knocking the clues out of your hands. It demands perfect reactions, a clear mind under stress, and an ability to deal with the constant trouble it throws your way. It's a challenging, ruthless game that isn't built to guide you to victory in any way. It just tells you to light some fires in some cabins and get to work.

And modern horror owes it a debt. Its groundbreaking work in setting up how a stalker style villain would work in a horror game, how it can create player tension through surprise and shock, how mysteries can keep an unsettling mood going, and many, many more elements would work well in video game horror, as we would see in games like Resident Evil, P.T., Fatal Frame, and more. It built all of this back in 1989, too, becoming a work far ahead of its time.

Friday the 13th, unpleasant, frustrating, and irritating as it may seem to many, is where I feel horror in games truly began. Many would argue that it was a clumsy beginning, but sometimes, the greatest experiences in video game fear come from not playing fair, and being unafraid to bewilder and overwhelm the player.