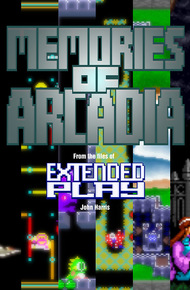 Memories of Arcadia by John Harris

Game design does not go obsolete. What was fun once can be fun again, and nostalgia has nothing to do with it. This simple, fierce declaration forms the basis of the fanzine Extended Play and its coverage of three fields of gaming: RETRO, INDIE, NICHE. This compilation of articles on arcade games represent its dedication to the Retro beat. Loaded with screenshots and full of obscure details, scavenged from disparate sources and some of which is available nowhere else. It provides walkthroughs, strategy guides and design dives into six diverse, classic arcade games: Gradius, the classic shooter; Dorodon, a chase game with a changing maze; Bubble Bobble, the whimsical platformer filled with amazing secrets; Mr. Do!, which is kind of like Dig Dug but much deeper; Rampart, Salwitz and Ralston's brilliant strategy/puzzle game of castles and cannons; and Cadash, a surprisingly successful melding of arcade platformer and RPG.

Harris's Extended Play mag is one of the finest indie mags going, one that manages to deftly construct a broad-but-specific focus on indie titles. Memories of Arcadia is an excellent curated assortment of his write-ups on arcade games, one that is a must-read for collectors as well as anyone—like your humble curator—who grew up feeding quarters in video arcades. – David L. Craddock, curator, StoryBundle

One of the unsung heroes of the era of classic arcade games was Universal, manufacturers of Space Panic, Lady Bug and the Mr. Do! series. They managed to last a little while after the fall of arcades; the last Mr. Do game, Neo Mr. Do!, made by Vesco, came out late enough to be made for the Neo-Geo hardware. The company still exists today, mostly as a casino and resort company with a sideline in pachinko manufacturing.

In the classic arcade era they spun off their sales division for awhile, which released a number of games themselves. One of their early releases appears to have been Dorodon, which various sites credit to UPL, even though the title screen itself says it's copyright by "Falcon."

I have no idea who or what Falcon is. I still suspect UPL made it, because of their ties to Universal, and because Dorodon has a surprising amount in common with Universal's Lady Bug, enough that I think it's probably a self-made hack of that game, similar to how Midway made add-on boards for Pac-Man that turned it into Ms. Pac-Man.

Both Lady Bug and Dorodon are maze games, where you have a character trying to clear a board while pursued by fast-moving enemies. More significantly, both are games where you, and only you, can change the maze as you play, by moving into turnstiles. This allows you to adjust the labyrinth to your liking, and with a sudden movement you can put a wall between you and a pursuer.

Both games have an otherwise-fixed board, designed so that there's no configuration of turnstile rotation that can ever block you off completely from the enemies. And both games have a lot of randomness: enemy movement is chaotic and jittery until one of the chasers gets a lock on you, in which case it will diligently take the shortest path it can to catch you. This is where your ability to block them off with the turnstiles is useful, for if you play it right you can instantly make the shortest possible path to you longer by twenty tiles or more.

A couple of additional details: the name entry board is identical between the games, and a couple of the sound effects are the same as well. But while Lady Bug was a sleeper hit, Dorodon is now largely forgotten. I am here to tell you that Dorodon is actually a great game on its own, and deserves to be treated as its own thing, separate from its probable source.

Like lots of old arcade maze games, Dorodon's premise is bonkers. Many minor manufacturers watched Pac-Man's success and decided that what the public wanted was insanity. So in Dorodon, you are a yellow-and-purple gorilla in while overalls, and you have two jobs: to capture the imp-like Dorodons that roam the board, and to turn the turnstiles so that they're all white. The former is the most consistent way to score points in the game, but you only get those points if you manage to complete all the turnstiles.

Your unnamed simian protagonist has no direct means of defense. Instead, randomly placed on each board are three yellow Question Marks, which turn all the roaming Dorodons into Ice Cream Cones for a limited time. In Pac-Man, such a move would open the door to big scoring, but here grabbing Ice Cream Cones scores very low: each is only worth 100 points. This is a general thing with Dorodon. It is hard to achieve impressive scores. It's not too difficult to complete a board by turning it all white, but if that's all you do, you'll get to advanced levels with a piddling score.

Like in the archetype laid down by Pac-Man, each board is a single screen, laid out into a maze. Like Lady Bug, within the maze are turnable walls, which the player can rotate. For the most part your canary-yellow chimp is defenseless, but by flipping a wall around they can suddenly block off a route and evade pursuit. And like Lady Bug, the maze is designed so that it's impossible to create a board layout where it's impossible for the Dorodons to catch you.

Unlike either Pac-Man or Lady Bug, however, there are no "permanent" walls other than those bordering the maze. The only barriers are what you construct with the turnstiles.Except at the beginning of a level, the Dorodons are faster than you, and while they spend a lot of their time bumbling about randomly, when one decides to give chase it is a relentless pursuer.

"Highly connected mazes" are those with lots of small loops in them, and they are of great aid in an angry Dorodon's pursuit of your hapless ape. So, basic Dorodon strategy is to arrange those walls so they connect together, making the barriers that your red menaces must move around to reach you larger. It also means, when you buy yourself some time by putting a wall between ape and foe, that the Dodoron will have to cover more territory to catch back up to you.

Those walls I mentioned, they start each board in one of three different colors, randomly. When you flip one around, it changes color to one of the others. Your ultimate goal is to turn the whole maze white, which immediately ends the current level.

Once a gate has been turned white, it doesn't mean you can forget about it. On every level after the first, spinning a white gate will unsolve it, turning a different color. This is bothersome, but not a huge hassle. It does mean, though, that you might need to flip a gate a couple of extra times to get it both the color you want and in the best Dorodon-blocking orientation. It also means, if you turn a solved gate hastily to get away from the enemy, you'll have to fix it later. As you turn gates white, they also increase the number of Dorodon jails at the top of the screen. I'll get to those in a bit.

At the start of every level, there are no Dorodons on the board. There is one sitting in the middle of the screen, but it's actually more of a marker; you can safely walk right through it, so long as a real Dorodon isn't in the process of emerging.

At periodic intervals, an active Dorodon will come out from the center. Usually it'll just randomly meander around for a bit, but eventually it'll catch your scent, or something, and decide to eat you. When this happens it turns into a ruthless and intelligent pursuer; it can easily figure out the path to take that gets it to your chimp's location quickest. This makes Dorodon a very difficult game for the unprepared.

There can only be up to four active Dorodons chasing you at once. When the fourth emerges, like in Lady Bug, a prize appears in the center of the board, worth a lot of points. Collecting it plays a short tune that freezes the Dorodons in place for a short bit while you're free to flip gates to white. The Dorodons actually unfreeze a little before the tune ends, so be alert! Unlike Lady Bug, by the way, you cannot farm prizes by killing a Dorodon and letting it reemerge; you only get one prize per board and/or life.