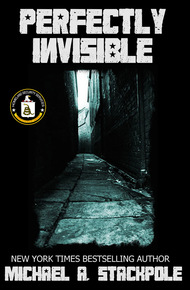 When not working, he enjoys dancing and has great fun cultivating a taste for expensive Scotch whisky. You can read more about him, his work, and the occasional Scotch review at his website: www.stormwolf.com or you can follow him on Twitter via @mikestackpole.

Perfectly Invisible by Michael A. Stackpole

Perfectly Invisible is New York Times bestselling author Michael A. Stackpole's second Digital-Original novel. It's an alternate history combining science fiction with police procedurals in a future that is now.

Perfectly Invisible is the first in a brand new series of stories set in a world very close to our own, and yet so very different. In the world of Homeland Security Services, the 1993 attack on the Twin Towers brought them down, killing over 60,000. In response, American ratified the Patriot Amendment to the Constitution and went to war with Al Qaeda. In 1996, terrorists attacked the Democratic National Convention in Chicago, wiping out the left wing of American politics and vaulting Newt Gingrich into the White House.

Miracle Dunn has just joined the elite Homeland Security Services. On her first day she catches two cases. The first is a seemingly simple murder of a drug company employee. The second is a twelve year old murder discovered because of the first; the resolution of which threatens the leadership of one of the world's largest pharmaceutical companies.

The world of Perfectly Invisible is one filled with many secrets, and just as many ways of ferreting them out. For Miracle Dunn, the question is how far can someone go to protect people who truly have no clue as to how much danger is lurking out there.

"Michael A. Stackpole is incapable of writing a book that isn't imaginative and intelligent." – Stephen R. Donaldson

Mike Stackpole and I have been chasing each other’s careers since we were both in our late teens. He taught me how to world-build when I was 17 (a lesson I took to heart), and he’s the Star Wars author I’m most confused for! He also got into indie publishing well before I did, and made me take it seriously. – Kevin J. Anderson

Miracle Dunn paused outside the open doorway to apartment 6A. The silver Homeland Security Services badge clipped to her belt had gotten her past the Metro uniforms down in the apartment house's lobby. She'd kept her dark aviator sunglasses on which, along with her dark suit jacket, slacks and double-breasted vest over a regulation white shirt and dark tie, marked her as government issued. She wore her blond hair pulled back into a ponytail and had secured it with an elastic band that matched her suit.

The uniforms in the lobby were meant to be impressed with her cool anonymity, but the Metro homicide detectives would be anything but. Not only not impressed, but resentful at HSS interference forcing them to surrender a case. As she entered the apartment, walking down a short corridor leading past the bathroom and a galley-sized kitchen, she removed her sunglasses, but set her face in as neutral an expression as she could manage. She modeled it on those her instructors at Quantico had worn every single day. Firm nonchalance.

Phil Quinn went and ruined it. He'd always been preternaturally observant, but she could tell from his grin that he'd been expecting her. The middle-aged man in a rumpled trench-coat swiped the back of his hand over his forehead. "It's okay, boys, the day is saved. The Snakes have sent their best."

Two other detectives and a Metro crime tech laughed. The forensic pathologist, who wore an HSS windbreaker, didn't even turn from the corpse to see who had walked in.

"Inspector Quinn, so nice to see you again."

"So formal, Agent Dunn." Phil pulled a take-away cup of coffee from a cardboard tray and extended it to her. "I'm just yanking your chain. When I called, I was glad to hear you were catching."

She accepted the coffee and her expression cracked. "It's good to see a friendly face, and great to be back to work after six months in a class room."

"I wanted to come down to Quantico for your graduation, but JR had the flu, so Dee swapped weekends with me and I got to nurse him."

"I got the flowers, Phil, thanks." She popped the plastic top off the coffee and sipped. Light cream, two sweeteners and a touch of cinnamon. Phil never forgets anything. "What do we have?"

"Always liked that you were business first." Quinn led her toward the apartment's far wall. Blood spatter centered around a bullet-hole which had seen sealed beneath a sheet of plastic. The lower half of the splatter had been smeared by the victim's slow slide to the ground. Brown-haired woman, late-twenties, slender, naked, lay slumped at the base of the wall with a gunshot wound to her chest, just above her left breast.

"What we have is the vic, through and through GSW."

Miracle frowned. When she'd been with Metro homicide, she'd worked dozens of simple homicides like this, and never had HSS been called in. "What makes this special?"

The forensic pathologist looked up from where she knelt beside the body. A petite woman of Asian ancestry, she pushed glasses up on her nose with the back of a blue latex glove. "GSW, yes, likely cause of death but..." She reached down and opened one of the woman's brown eyes. Blood stained the eyeball. "Petechial hemorrhaging. Bruising around her neck. She was strangled before she died. Given the nature of the bruising, two to three hours would be accurate. I will know after I get her back to the lab and do a full examination."

Miracle dropped to a knee to take a better look. "Okay, the strangulation complicates things, Phil, but I still don't see why this is HSS."

Phil pointed at the hole in the wall. "Bullet went all the way through. I went along to the next apartment to see if anyone had been hurt. I get in, look, no bullet hole, which is impossible."

He held a hand out to the lab-tech. "Barber, need your light again."

The man flipped it to Phil, who exchanged it for Miracle's coffee.

"Be careful, Agent Dunn, don't mess up my crime scene." The pathologist held her arms out, proscribing a path. "And I expect you in my lab as soon as possible so I can get swabs and samples for elimination purposes."

Miracle frowned. "All of that information is in my files. Metro's had it for ever."

Phil laughed. "Since HSS is to the Department of Justice what the Green Berets are to the Army, Metro is strictly Neighborhood Watch by comparison. Of course Dr. Reynolds will need to take her own samples. I got that lecture down right, Doc?"

Reynolds gave the Metro detective a withering stare, then returned her attention to the body.

Miracle worked her way around the corpse. She pulled on a pair of latex gloves and hunched down. She flicked the flashlight on, peeled back the plastic seal over the hole, and shined the light through. Given the hole's size, Miracle figured the bullet had been at least a .45, which would have sounded like a cannon in the small apartment and should have awakened the neighbors in the wee hours of the morning.

The beam played over a dusty narrow room. It caught a lot of cobwebs, which acted like fog. Furniture and appliances appeared in all the right places and looked upscale if a little dated. More important than that, however, was the mummified corpse stretched out in a recliner, facing the dead television.

Miracle flicked the light off and turned. "That's a big old TV in there. Makes time of death, what, twelve years ago?"

Phil tapped his nose with a finger. "That's why you got tapped for HSS, Agent Dunn, and why this whole messy case lands squarely in your lap."