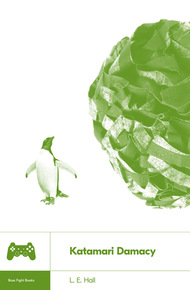 L. E. Hall is an artist, writer, puzzle-maker, and immersive environment & narrative designer living in Portland, Oregon. Her work focuses on the intersections between arts, culture, and technology, especially in gaming.

The universe falls into chaos. The moon and the stars vanish from the night sky. The son of a fickle deity must restore balance to the cosmos… by pushing a sticky ball around and picking up every toothpick, tree, and skyscraper in its path. A plotline this wild could only describe "nah… nah nah nah nah nah nah nah" Katamari Damacy, the irresistible little cult game turned cultural juggernaut.

But the 2004 release of Katamari almost didn't get the ball rolling. Reviewers worldwide weren't sure how to classify it and initial sales numbers were low. Those who actually played it, though, were won over by its novel gameplay, goofy surrealism, and catchy soundtrack. Pushed into the mainstream by its passionate fans, Katamari remains one of the best video game examples of pure anarchic fun.

Based on new interviews with Katamari creator Keita Takahashi himself, game designer and writer L. E. Hall explores the unlikely story of the game's development, its unexpected success, and its lasting cultural impact. Along the way, she uncovers Katamari's deep roots in Japanese culture, in contemporary art, and in the transformative power of play itself.

By the time PlayStation 2 launched in 2000, I thought the industry had set genres in stone: FPS, RPG, fighting, platformer. Then along came Katamari Damacy, a game so quirky, so colorful, so quintessentially imaginative, that it rolled our expectations into a giant ball and tossed them away. Hall's writing captures the magic of Katamari Damacy's creation, and what made the game as much fun to watch as it was to play—a quality that would become hugely important as games and technology marched on. – David L. Craddock, curator, StoryBundle

WHAT IN THE WORLD IS A KATAMARI?

The katamari. The Prince.
Where the first rolls the second follows.
Roll, roll, roll.
—The King of All Cosmos

From your very first encounter with Katamari Damacy, you're being taught how to play it.

When you first load it on the PlayStation 2, you're greeted by the Namco logo on a white screen, and the sound of a man humming and singing a theme tune that will soon become very familiar: "Nah… nah nah nah nah nah nah nah."

A tiny, hammer-headed green figure, the Prince of All Cosmos, stands behind a lumpy pink and yellow ball: a katamari. The player controls the Prince's (and the katamari's) direction with the PlayStation 2 thumbsticks, moving left to right, or rolling forward, accompanied by what sounds like the squeak of a rubber dog toy. Pushing the sticks forward causes the Prince to roll the sticky katamari toward the letters of Namco. It rolls over the logo, taking a piece with it as it continues toward the distant horizon, and in doing so, loads a saved game or begins a new one.

Just one screen into the game and you already have a sense of the physicality of Katamari Damacy. You understand how you, the Prince, and the katamari interact with objects in this world. The gameplay itself has assimilated the text on the title screen—and thus the external "meta" world—into the game world, hinting at the fun yet to come.

The man's humming turns into a growing chorus as the screen shifts to a pastoral scene of cartoon cows grazing against a blue sky. A dark, strangely-shaped figure rises on the horizon as the game title appears: Katamari Damacy, a name that in Japanese (Katamari Damashii) translates to "lump of souls" or "clump of spirits."

Two rainbow spotlights burst onto the screen, revealing the King of All Cosmos, an impressively mustachioed man with a sparkling, crown-bedecked purple hammer-head. He's decked out in a giant ruffled collar and gold neck chain, tights beneath his billowing purple cape, and a skin-tight muscle shirt that shows off his royal gym body.

The joyous abandon begins as the King takes off into the sky above Mount Fuji. A crane flaps by, holding the Prince in a little swing hanging from its beak. Another crane flies by, clutching a turtle. Why not!

Four duck heads pop into frame, singing along with the theme tune. Four more appear on the opposite side, joining in, as giraffes and elephants dance in front of the mountain. It's an ecstatic song with bright horns and thumping drums. A rainbow fills the screen, which the Prince slides down on his way to hang out with his family, the King and Queen. The King plays a guitar while the tiny Prince dances on his knee; the Queen, resplendent in pink and white, looks on adoringly.

The camera cuts the King flying over the land, sending sparkles down on dancing pandas, flowers, mushrooms, butterflies, and other animals. The scene closes with the King and his family driving in a convertible down a mushroom-speckled lane towards a huge castle in the clouds, under the bright arches of a rainbow.

This is the world of Katamari Damacy: bright, loud, and joyfully absurd. The game's scale can be as small as a turtle or as massive as the entire universe. Either way, you're happy to be along for the ride.