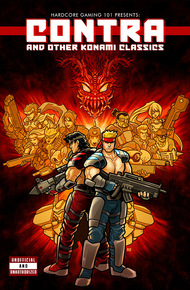 HG101 Presents: Contra and Other Konami Classics by Kurt Kalata

Let's attack aggressively! Contra and Other Konami Classics, brought to you by long-standing retro video game website Hardcore Gaming 101, includes a complete rundown of all of the games in Konami's classic Contra series, ranging from its arcade and NES roots, to its modern day mobile incarnations. Also included is an extensive look at the very popular (in Japan) Ganbare Goemon / Legend of the Mystical Ninja series, as well as many of Konami's 8-bit Famicom and Nintendo Entertainment System releases.

Even if this wasn't your introduction to the legendary Konami code, as it was mine, Contra was arguably the NES game where it most came in handy. Kalata gives a wide array of Konami classics their due, with the entry on Contra being an expected standout in a standout gallery of great games and great writing for great games. – David L. Craddock, curator, StoryBundle

Devoted to Konami series - The Castlevania Dungeon and The Contra HQ.

Before I left for college, I had grand plans for an expansive site called Konami World, focusing on many of their other series as well. Unfortunately, due to real life responsibilities, it never quite got off the ground. (It never went public either, at least back in the day, but it can be found archived at http://www.hardcoregaming101.net/konamiworld/ frames.html, preserving the bad 90s web design and terrible teenage writing.)

This is also the third Konami book that I've published here at HG101 ? after the Castlevania and Konami Shooter entries ? I've always envisioned this series as an evolution of the old Konami World project. They were one of the best developers through much of the 80s and 90s, and even though they've almost entirely given up on game development as of this writing, it hasn't stopped us from reminiscing about their glory days.

The two features of this book are Contra and Mystical Ninja (AKA Ganbare Goemon). The Contra article is essentially a total rewrite of The Contra HQ, much like the Castlevania book was a revamped version of The Castlevania Dungeon. The Ganbare Goemon article has been part of the HG101 site for a long time, but it needed some polishing up. Goemon in particular I have a strong attachment too, as it was one of the first series that I began importing, along with TwinBee and Parodius, back when I first mod-chipped my PlayStation and tore the tabs out of my SNES cartridge slot. It's a massive series, and only a few were ever released in North America. I have fond memories of printing out hiragana and katakana tables, and studying them in my high school cafeteria, while trying to puzzle through those games' menus.

The rest of the content is rounded out by coverage of most of Konami's NES library, including many Japanese exclusives, plus an assortment of other arcade games, and a few other classics, like the Rocket Knight/Sparkster series. There's still a lot more Konami stuff to cover ? maybe we'll finally get some Metal Gear and Silent Hill coverage for the next volume!