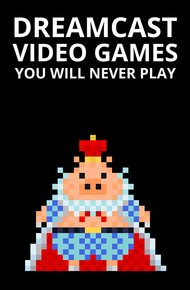 Dreamcast Video Games You Will Never Play by Unseen64

One of the most beloved consoles ever made was the last one released by Sega: the Dreamcast is surely a cult hit among hardcore gamers. Released in November 1998 in Japan, and late 1999 in America and Europe, the Dreamcast was the first "128 bit" hardware available after the 5th generation of consoles and a huge step forward for 3D graphics. While indie developers continue to make Dreamcast games to this day, major gaming studios at the time had to kill many projects when they realized that the market was not profitable and Sega was bailing out. There are some popular PC franchises such as Half Life, Messiah and System Shock 2 that were planned for the Dreamcast and later cancelled, or titles started on the Dreamcast that were then published for different consoles, such as GunValkyrie and ToeJam & Earl III. Many other obscure Dreamcast games were never released in any way and were soon forgotten: in this book we'll take a look at some of the most interesting titles that we could have played on the last Sega console.

Dead long before its time, Dreamcast was as famous for hosting droves of oddball titles as it was heavy hitters like Soul Calibur and Sonic the Hedgehog. Unseen64 explores the catalog's deep history to shed light on games you shouldn't miss (but probably will). – David L. Craddock, curator, StoryBundle

Agartha, a legendary rumored city said to be located at the earth's core, was also the name of a cancelled survival horror adventure planned for the Dreamcast. It began development in 2000 by French team No Cliché, promising an intriguing story and inventive gameplay. No Cliché opened their doors in the late 90s, lead by Frédérick Raynal (of Little Big Adventure fame) and were then bought by Sega to create exclusive games for their Dreamcast.

Together they released such beloved titles as Toy Commander and Toy Racer, both of which earnt positive reactions from critics. Agartha would have been their most ambitious and complex game to date. From the small amount of info released to promote the project, it seems that the team had some interesting ideas to explore:

"In the Winter of 1929, a Romanian village is partially destroyed due to an earthquake. Below, a subterranean city called Agartha exists as a prison where evil is being kept away and waits for an opportunity to escape. As a protagonist named Kirk, you'll face challenges such as demons and monsters, but also have to take moral decisions and choose whether to save the innocents or trigger the arrival of chaos on earth."

Agartha would probably follow closely in the footsteps of titles such as Alone in the Dark and Silent Hill, with a more psychological take than the usual jump-scares. Gameplay would encompass exploration, solving puzzles and surviving enemy encounters in the best way possible. The morality system would also affect players progress through game and as well as the story itself. Depending on your choices, such as saving or letting people die, the ending would differ.

Like in No Clichè's previous works, the graphics also pushed the limits of the hardware and were quite impressive for their time. The only video available released shows a great looking environment in a snowy mountain, while in one particular scene, we can see a watermill with a flowing river that displayed their streaming technology, developed to handle heavy real-time events such as avalanches.

To create a realistic village and to get the architecture right, the art team traveled to Romania and went across the country to take inspiration for their project. Unfortunately the Dreamcast was discontinued in 2001 and Sega decided to pull the plug on No Cliché: after trying to survive by developing a PC port of Toy Commander, the team had to close down due to a lack of funds. Agartha would have been an amazing entry to the Dreamcast's library and could have been a cult hit for enthusiasts of the horror adventure genre: like most of the unreleased games covered by Unseen64, it's a real shame that No Clichè was not able to fulfill their vision.