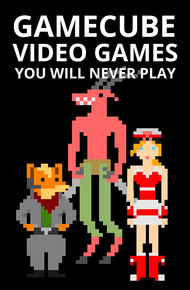 GameCube Video Games You Will Never Play by Unseen64

After the Nintendo 64 came up short against Sony's PlayStation, 32.93 million consoles sold versus 102.49 million, Nintendo reevaluated their strategies. They had high hopes that with the GameCube they could restore their fading image and regain lost market share. After a successful launch, the GameCube was unable to sustain that momentum, and Nintendo would spend a significant amount of the sixth generation in last place: it went on to sell only 21.74 million consoles. Once again allowing arrogance to convince themselves that profitability from proprietary media was more important than the games on said media, Nintendo built the GameCube around their own mini-DVD format. These discs could only hold a fraction of the memory that a normal DVD could, making ports and multiple platform releases unnecessarily difficult.

The sixth generation will be forever remembered as a trend-setting generation. The innovations that console makers pursued during this time with regard to hardware, online and software discussions, not to mention in game development and design, are often taken for granted today. Sony may have won the competition to sell the most consoles, but the GameCube still received a now-legendary library of games. Unfortunately though, a lot of projects never came out. In this book we'll take a look at some of the most interesting cancelled games planned for the GameCube.

GameCube Games You Will Never Play - Buciyo 5 (The Bumbling 5)

In only about 4 years of existence, United Game Artists managed to became one of the most original and beloved Sega teams ever existed, especially for Dreamcast fans. Originally founded as Sega AM9 and lead by Tetsuya Mizuguchi, they had a portfolio of released games composed of just 2 new Dreamcast titles and a sequel (Space Channel 5 - 1999, Rez - 2001, Space Channel 5 Part 2 - 2002). UGA were for sure a talented and inventive studio. Blending catchy music with beautiful, sometimes abstract 3D visuals, both Space Channel 5 and Rez are now considered cult classics and often used as examples to show how games can really be art.

Synesthesia, the phenomenon felt when multiple senses are activated after the stimulation of a different one, was an inspiration and a game design objective for the United Game Artists team, mixing graphic, audio and gameplay so to suscitate an abundance of feelings and sensations. It's easy to imagine how new games from UGA would have been acclaimed by their fans, but unfortunately things did not go as planned.

After Sega discontinued the Dreamcast on March 2001, United Game Artists and the other Sega teams started working on the competitor's consoles, creating new titles and porting their old classic or unfinished games to Xbox, Playstation 2 and Gamecube. In the following months UGA also released ports of Rez and Space Channel 5 for PS2, while they started developing two new projects: Rez 2 and Buciyo 5.

Buciyo 5 was the new, original project by UGA planned to be a Gamecube exclusive, but not much was ever revealed about it. Sega quietly announced the game in January 2003 as a "New Project by United Game Artists" along with other titles such as F-Zero GX by Amusement Vision and Skies of Arcadia Legends by Overworks. At the time Jake Kazdal was the only American working directly at UGA on Space Channel 5 and Rez as an artist, animator and designer, and he was the only one from the Rez team on the early prototype of Bukicyo 5, before a bunch more staff came on for the full gameplay prototype.

Jake was featured in an article published in January 2014 by Edge Magazine "After completing Rez, Kazdal worked on a GameCube adventure for a year, a prototype that was never released". Still without knowing much more about Buciyo 5, we tried our luck and got in contact with Jake, who after getting full permission from both Mizuguchi-san and Yuda-san to openly discuss the project, helped us to preserve some more memories about this UGA's lost masterpiece.

Jake told us that:

"After Rez shipped, the rest of the Rez team went into a sort of discovery mode on what they would do with a Rez 2, and if that was even going to happen, they wanted to wait a bit and see how sales were. I was a big fan of my first director at Sega, Takashi Yuda, who was the creator and director of Space Channel 5. I had worked under him for my first year at Sega in Tokyo on that project and was just a big fan of his game design theory and style in general. He was starting a small team to prototype an idea for an action / adventure on Gamecube, so I asked to join him for a time, while the Rez team figured out what they wanted to do for the next project."

According to the information we managed to gather, we imagine Buciyo 5 (which roughly translates to "The Bumbling 5") as a mix between Mega Man, Metal Gear Solid, Pikmin, Tokobot and Ape Escape 3. Sounds interesting? It sure does. Players would have been able to choose between 5 red robots, visually somewhat in the vein of Mega Man in terms of cute robotic characters with human-like faces. Each robot had a different peculiarity: voice, eyes, nose, ears, and brain. This would have allowed different gameplay mechanics and approaches to the game's levels, as explained by Jake:

"So one [robot] could mimic voices exactly, one could see really well, one could smell really well, one could hear really well, and one was a genius. You would use these 5 together to infiltrate enemy bases and take on the enemies as carefully as possible. They also had plungers on their heads, and you could jump on an enemy head-first, and flip him around with your plunger head! Or jump onto the ceiling and hold still as enemies walked underneath you, etc. It was pretty slapstick, and really cute, had a jamming soundtrack and was Yuda-san's brainchild that we cranked on for a while".

These cute little robots could jump one on another to create some kind of robo-tower to reach higher places, using their plungers they could throw and stick themselves on a wall to create new platforms, shot different kinds of balls against enemies, create soap bubbles, rotate wood planks to fly or as a propeller for a boat, and much more. The Buciyo 5 team first created a concept video to internally pitch the game to Sega HQ - and it was a success: the project was greenlighted and they started working on a prototype.

Once Rez 2 was officially abandoned - as the first one didn't sell enough to warrant a sequel - more developers switched to Buciyo 5 and in about a year they were able to create an awesome playable demo, showcasing the main features of the game and its unique style. Jake remembers:

"[...] working late nights, putting together a badass gameplay demo that was beautiful, super interesting and quirky, and designed by a bunch of *really* intelligent, talented game designers who really believed in the project. " [...] "It was at this time that I decided to move away from animation and really start focusing on environmental art, and Yuda-san had worked on all these Genesis era classics like Castle of Illusion and others, and I was stoked to be able to study with someone of that pedigree. We looked at a lot of classic Disney films for lighting and composition reference, and I fell in love with pre-production and concept painting during this project."

Unfortunately, as it often happens with the most original and interesting games, marketing decisions were going to kill off the project. Mike Fischer, VP at Sega America at the time, went to Japan to evaluate new Sega games for the American market and was not interested in a quirky, cute adventure game, like Buciyo 5 definitely was. Sega Japan said they would have stopped financing the project if the American branch wouldn't publish it in that area . So the plug was pulled: Buciyo 5 became another unseen game we'll never play.

Of course United Game Artists were crushed when their last dream game was canned too. Rez 2 never made it past the pitch video phase, but Jake remembers "It was *sick*. Yokota-san, the art director of Rez, (and Rez 2, and Panzer Dragoon Saga) is a genius and it was an evolution of Area 5 from Rez. Insanity."

It seems that, at the time, there was no place for such avant-garde, experimental games at Sega: not long after Buciyo 5 was cancelled, Tetsuya Mizuguchi, Katsumi Yokota, Ryuichi Hattori, Jake Kazdal and other key staff left the studio, and United Game Artists quickly ceased to be. Those that remained at Sega, merged with Sonic Team (and ended up working on the stylish DS games Feel The Magic: XY/XX and The Rub Rabbits!), and many of them are still there.

In October 2003 Mizuguchi founded Q Entertainment along with Yokota and other former Sega developers to keep working on interesting music game hybrids and creating projects such as Lumines, Meteos, Every Extend Extra and Child of Eden. In 2009 Jake Kazdal founded his indie studio 17-BIT (formerly Haunted Temple Studios), releasing cult-following games such as Skulls of the Shogun and Galak-Z: The Dimensional. United Games Artists will always be remembered for having continued - till the end - to create original games following their own creativity: today their unique style is still kept alive by UGA's former members.