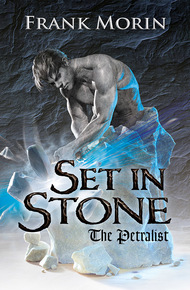 Frank Morin is a storyteller, an outdoor enthusiast, and an eager traveler. He is the author of the epic teen fantasy series, The Petralist. Set in Stone kicks off the series, which is known for its big magic, big adventure, and lots of humor. Frank also writes The Facetakers, fast-action time-travel fantasy thrillers.

When not writing or trying to keep up with his active family, he's often found hiking, camping, Scuba diving, or traveling to research new books. Frank is a member of SFWA. Find out more about his novels and his shorter fiction, or join his readers group at: www.frankmorin.org

Set in Stone by Frank Morin

Connor cannot save everyone he loves, but how can he choose who will die?

In Obrion, commoners cursed with magic must obtain patronage from a high lord prior to their sixteenth birthday, or face execution.

Should be a simple process. But then armies start clashing around his small town, led by superhuman Petralists, devilish Builders, and layers of deadly intrigue that twist his loyalties into knots.

If he stays, he dies.

If he leaves, people he loves will die.

Set in Stone launches Connor and his friends into an epic adventure filled with relentless humor, unique magic, and enough twists and turns to braid bacon into a noose.

The warm-faced midwife swaddled a screaming newborn baby boy, wrapped him in a homespun blanket, and handed the tiny soul to his eager new mother.

"You're lucky. He looks healthy despite the difficult labor."

Hendry, dressed in the worn, but clean clothing of a laborer, leaned over the birthing bed and wrapped his arms around Lilias, his wife, and their child. He blew out a relieved breath and his knotted muscles relaxed.

As they marveled at the baby's perfect, tiny hands and feet, Lilias whispered, "Welcome to our family, Connor."

The midwife crossed the whitewashed room to a small table next to a row of blocky stone cradles. She opened a thick ledger and thumbed to an empty page.

"With the rush to save the baby, I don't even have your names registered." Nodding toward the stone cradles she added, "We'll want to proceed with the testing straight away."

"You have the birth tax?"

"Of course," he said again and reached for the small leather purse at his belt.

Before Hendry could respond, something crashed, like a door being slammed somewhere in the building. Shouting voices pounded past the birthing room, and another door slammed.

The midwife frowned and put down the quill. She headed for the paneled wood door that led into the rest of the birthing center, but it flew open before she reached it.

A young woman, barely more than a girl, stepped through, eyes wide and cheeks flushed. "It's High Lady Elspet! She's here, and the baby's coming early." She wrung her hands in her simple white linen dress and continued in a terrified voice, "There's problems."

The midwife's face paled and she rushed for the door. Pausing in the entrance, she called back to the new parents, "Wait here. I'll be back." She waved one hand toward the stone cradles. "Pick one and we'll test your son as soon as I return." She pushed past the young woman, who pulled the door closed behind them.

The parents shared a surprised look. "I hope the high lady and her child are safe," Lilias said as she cradled her baby tight and arranged him to try nursing.

"I'm sure she'll be fine." Hendry caressed her sweat-streaked face and gazed into her eyes. "I'm just glad you are."

An hour later they still waited. From the urgent footsteps that regularly passed their door, the situation with the high lady's birthing did not seem to be improving.

Finally Hendry stood. "Enough. Let's get this over with." He took the now-sleeping Connor and turned to face the row of stone cradles. After a deep breath, he marched across the room, his face determined.

The four cradles looked as different as the stones from which they were carved. Hendry approached the first, a crude thing made of a solid block of Alasdair White granite, the top chiseled down into a rough depression to hold a child. It was ugly and cold, perfectly suited to its onerous task. He frowned at the slipshod workmanship and his hands itched for his tools. He'd never seen a block of precious granite so ill-treated.

The next two cradles were little better. A much smaller cradle fashioned from dark basalt seemed to huddle beside the larger white granite block, while a shiny black obsidian cradle next to it glinted with reflected lantern light.

Hendry ignored the fourth cradle entirely and faced the blocky one of granite. No son of his would be first tested in anything but granite, no matter how rough the stone might be carved.

He turned at Lilias' voice. "It must be done, love."

"I know." She spoke calmly despite the worry lines wrinkling her forehead. "Put him in that one."

She pointed at the last cradle in the line, the one he had not even considered. Set apart from the others by workmanship more than space, it was fashioned into a beautifully sloped depression formed by six distinct stones, fitted together perfectly. The polished surfaces were lovingly carved, with colors merging so beautifully, it all but shouted aloud the blessed state of the highborn children who would be tested there, children like High Lady Elspet's imminent newborn.

"You know why not." He glanced nervously at the door. "If anyone found out. . ."

"No one's coming any time soon." She cocked her head and added, "This way we only test him once. Do you really want to put our Connor, in those others?"

After another glance at the crude stone cradles, he sighed. "You're right."

He then moved to stand before the beautifully crafted one, slipped the swaddling blanket off the child and placed the infant onto the merciless stone. At the first shock of cold air, the baby began wailing. He shook his little arms and legs angrily and bellowed at the chill touch of the stone.

An ominous silence descended over the room. Hendry bent over the cradle, while Lilias sat up in the bed. The baby lay silent, his little hands and feet pressed down against the cold stone as if stuck there. His mouth opened, but he made no sound. His little body began to shake and every tiny muscle tensed until they all stood out clearly against his naked skin.

"Oh, no," Hendry whispered as his worst fears were realized in the tiny body of his son.

Connor began to swell. His body grew, as if he'd taken an impossibly huge breath of air, and the muscles of his limbs bulged to twice their normal size. He started to rock side to side, and the cradle began to rattle in time with his movements until it bounced against the wall. The movement spread to the other cradles and they thumped against the wall like caged beasts trying to escape.

Panic-stricken, Lilias stumbled up out of the bed. "Get him out of there!"

Hendry, who had stood rooted in place, reached for the baby, but flames exploded to life from the very stone of the cradle. He yelped and pulled back from the intense heat.

Lilias shouted with terror and tried to rush across the room. Her legs, still weak from the difficult labor, buckled, and she sprawled to the floor.

The flames disappeared as quickly as they had started, replaced by a fountain of water as thick around as Hendry's waist.

Now on hands and knees, Lilias gasped, "How can he make so much?"

He gave her an incredulous look. "That's not his water, love. It's the stone doing it."

A powerful gust of wind sprayed the water across the room over the parents, chilling them to the bone. Hendry pulled the baby into his arms as Lilias crawled toward them. For three heartbeats, silence reigned. Tiny Connor hung limp in his grasp, and the two of them shared a fearful look over his prostrate form.

Then he started to cry. They swaddled him quickly and Hendry helped Lilias return to the bed. She clutched Connor with shaking hands. Hendry hugged his family close, and for several minutes he stood tense, breathing fast, eyes clenched to hold back tears.

Lilias buried her face against his neck and whispered soft words until he slowly relaxed. "It's not your fault."

She sniffled and gave him a weak smile. "It's not all bad, dear one. If he's accepted, Guardians give important service."

"I won't risk it," he snarled. "They'll kill him at a whim." He released her and savagely wiped his eyes. "They won't have him, not yet. Not until he can face them as a man." He squeezed her shoulder, his face determined. "No one knows. We're leaving, right now."

Hours later, the midwife slowly entered the birthing room, her face drawn, shoulders slumped with exhaustion. Tears shone in her eyes. She stared at the empty room for a couple seconds before realizing the family was gone, although several small coins lay on the blank page of the register.

She grunted and took up the coins of the birthing fee. She shouldn't be surprised at the lack of names. Most commoners couldn't write. Out of habit she glanced in the three crude stone cradles, but saw nothing of interest.

A gasp turned her around. She hadn't noticed the young apprentice enter behind her. The slender young woman stood before the cradle intended for highborn children, one hand at her mouth. The midwife frowned and stepped over to see. The sight struck like a blow to her stomach.

Indented in the very stones was a perfect outline of a baby's body.

"Where are they?" the young woman asked.

"What are their names?"

"Where are they from?"

She only shook her head. She'd never seen anything like this, and lacked the emotional strength to grapple with the situation so soon after losing Lady Elspet's son.

"We have to tell someone," the young woman said.

They spun at the deep, cultured voice that spoke from the door behind them. High Lord Dougal stood there, his face lined with grief, but his intense blue eyes bored into them.

Without a word, the midwife gestured at the cradle. He crossed the room and, although he remained calm but for a widening of the eyes, he grabbed the midwife's shoulder and forced her to meet his gaze.

"Tell me all you know about this family. I must find that child!"