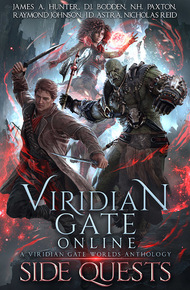 Hey all, my name is James Hunter and I'm a writer, among other things. So just a little about me: I'm a former Marine Corps Sergeant, combat veteran, and pirate hunter (seriously). I'm also a member of The Royal Order of the Shellback—'cause that's a real thing. I've also been a missionary and international aid worker in Bangkok, Thailand. And, a space-ship captain, can't forget that.

Okay ... the last one is only in my imagination.

Currently, I'm a stay at home Dad—taking care of my two kids—while also writing full time, making up absurd stories that I hope people will continue to buy. When I'm not working, writing, or spending time with family, I occasionally eat and sleep.

DJ Bodden is a writer and veteran Marine Corps pilot, currently working out of Geneva, Switzerland for a commodities firm. He read grown-up books at an inappropriate age, developed strong feelings about old videogames that have followed him throughout his life, and didn't own a car until the age of 23, when he learned to drive and fly starting at the same time.

As a kid with a head full of other people's stories, he decided he needed to gather a few of his own and joined the military. During the next thirteen years, he rode, rappelled out of, and flew planes and helicopters, got knocked out, cautioned, promoted, shot at, blew things up then rebuilt them, and met people from almost every walk of life imaginable.

He wrote his first book at the end of a combat deployment - producing a manuscript that still lives in a box somewhere - and spent the next few years trying to learn how to do it again the right way.

Now, with a few scars to show for it and his own stories tucked into his belt, he writes books for young-and-old adults who take their stories wide-scoped, high-staked, and a touch of "what if?".

The End is Coming.

An extinction-level asteroid is cannonballing toward Earth. In humanity's final hours, a lucky few earn a one-way ticket to the brand-new, ultra-immersive, fantasy-based VRMMORPG, Viridian Gate Online. Making that leap of faith might mean survival, but it comes with a steep price tag: "Travelers" will forever be stranded as digital avatars inside a fantastical world filled with vicious monsters, all-powerful AIs, and cutthroat players. Let the games begin …

Six amazing authors. Six incredible new tales. All set in the best-selling Viridian Gate Online Universe. Side Quests is an anthology for fans, by the fans!

Included in Side Quests:

"A Gentleman's Work" by James A. Hunter

When an Imperial Inquisitor captures a Thieves Guild Operative, Cutter must undertake a deadly rescue mission while using every grift in the book to stay one step ahead of a Headsman's Blade. And the prize for this extraordinary quest? Nothing short of the keys to the Rowanheath Thieves Guild. Deception, subterfuge, and heavy drinking—all in a day's work for a Gentleman …

"The Funeral Parlor" by Raymond Johnson

A young spiderling is stranded in an alien land, surrounded by hostile creatures. Forced to fight for her life in a bid to find her way home, she must transform into the predator she is destined to become or die alone and forgotten, trapped in a dark world know as the Shadowverse.

"The Raiding of Rowanheath" by J.D. Astra

The Crimson Alliance has breached the walls of Rowanheath, inciting Aleixo Carrera's rage. Now Abby and her rag-tag invasion crew must reach the keep's Command Center before the defending troops mobilize and shut down the takeover, else they'll lose the battle and the war for Eldgard's freedom.

"The Ballad of Jaro Edgewalker" by N.H. Paxton

Jaro is an assassin, and he's good at it. But when he finds a foe that is insurmountable by normal means and uncovers a plot to destroy everything he loves, Jaro has to balance his morality with his love for his friends and make an incredibly difficult decision.

Carlos Vega thinks he's escaping certain death by entering the virtual world of V.G.O., but instead he's swallowed alive by the deadly Barren Sands. He'll have to overcome the riddles and horrors of a long-forgotten temple in order to escape, but can he do it before the evil sealed there centuries ago finds him?

"A Final Kindness" by D.J. Bodden

Alan Campbell was a talker, not a fighter, until someone murdered his girl. He'd almost given up on finding the killers; now he's got a fresh lead, a trio of mercenaries who outclass him in every way but his wits. He'll cheat, bluff, and steal to get his revenge, and as one of V.G.O.'s immortal travelers, he's willing to die trying.

By James A. Hunter

I SLIPPED AROUND A tight corner, the night quiet except for the pitter-patter of a light rainfall and the distant howl of a guard dog, offering warning.

I sighed, then pulled my hood up just a little bit, ensuring the rain stayed bloody well out of my eyes as I headed into an alleyway, cast in perpetual gloom no matter the time of day. A rough looking place, that alleyway. Not the kinda place a bright bloke would venture—not at noonday and certainly not in the arsecrack of night. Everything about it screamed a warning: bad angles, narrow passage, an untold number of inky pockets of shadow, all perfect for an enterprising thief to hide away in. Some miscreant like yours truly, just waiting patiently for some dumb mark to wander by unawares.

Me though? I'm no dumb mark, and these dark alleys were more familiar to me than my Officer Suite over at Darkshard.

I glanced back over one shoulder, eyeing my new under-lieutenant Jake "Blackblade" Goodrich. He was a wiry little shite with a mop of brown hair and a razor-thin scar running down one cheek. He was a Traveler, but I didn't hold that against him, especially since he was bloody good with a blade and damned quick on his feet.

"Head on a swivel, eh?" I said, quirking an eyebrow at him. "I might have Georgie's Blade, but it's been a time since I've poked around here. Hard to say how the reception will be now that we're bedfellows with the gods-be-damned Imperials."

Jake offered me a lopsided grin and pulled free a gleaming black dagger, giving it a fanciful spin—a flourish I'd taught him personally. Even most good thieves couldn't pull off the trick; hands weren't fast enough for it. Georgie had taught me the trick as a boy. Hells, it was part of the reason he'd brought me on in the first place. Because hands like mine, well, they don't come along every day.

"I gotcher back, boss," Jake said, his voice rough—a bit gravelly—and marked with a strange accent. Grim Jack called it a Minnesota accent.

Jake was a drunk, a gambler, and a joker. All fine traits, so long as he was loyal, too. And so far, I hadn't found a man better in a pinch, except for Jack, of course. Well, him and Amara, but Amara wasn't a man.

"You just tell me who needs stabbing and I'll stab 'em," Jake continued. "Boom, pow, straight to da moon. I'm also good with kneecaps, dontcha know, so if you need me to pull a Tonya Harding, I'm all about it." His grin widened.

I rolled my eyes and rubbed at the bridge of my nose. Tonya Harding? Gods, but sometimes these Travelers are a right goofy bunch of bastards.

"Just remember to stab the enemy with the pointy end, eh?" I said, then turned back to the alley.

I padded deeper in, making for an unmarked and unassuming three-story building of dirty white plaster with a glossy black door. The Broken Dagger. Tavern. Inn. And the hidden lair of the Rowanheath Thieves Guild, though honest to bloody hell, guild was the wrong word. More of a union really. Just sort of a loose coalition of likeminded people. Business people—ones with a flexible view of the law.

I straightened my back, took one deep breath to calm my jittery nerves—I'm the best bloody Thief in all of Eldgard, I reminded myself—and pushed my way in, a wide shite-eating grin plastered across my face. The first rule of a good con man lay in the word itself: con was short for confidence. That was the most essential asset any thief needed. More than stealth. More than quick hands. More than a wicked-sharp blade. Confidence opened doors no lockpick ever could and acted as a better disguise than even the finest illusion. That was a thing Jack still had to learn. He was a gifted leader—it came natural to him, like a fish to water—but hells did he have confidence issues.

I motioned for Jake to follow as music washed over me intermixed with the shouts of gruff men and the baying of raucous laughter. A reputable sort of man might find the Broken Dagger to be a questionable sort of establishment. There wasn't a reputable man for a mile, though.

The interior was murky, thanks to the absence of windows, and illuminated mostly by a roaring fire at the far right-hand side of the room. Blue-gray smoke drifted lazily around in great billowing clouds, and the smell of sweat, dirt, tobacco, and sour mead clung to everything like a gauzy veil. The men and women who packed out the rough-hewn tables were tough, dirty-faced folk—though these days there were a fair-few number of Alliance guards enjoying a drink or a bite as well. The Thieves Union had done right by the Crimson Alliance, and the Alliance had paid out in kind.

Never had it been so easy to be a thief in Rowanheath.

I took another deep breath, savoring the spicy smoke that filled my nostrils. My grin widened. Gods below, but it felt good to be home.

Yunnam wasn't such a bad place—especially since Amara was there, and there was no one who provided more of a challenge or a reward than her—but nothing beat the Broken Dagger. This place ... The rattle of dice. The clink of coins changing hands. The sloshing of endless flagons of mead as servers whisked through the crowds, carting away empties and bringing full glasses. There was nothing like it. I glanced at a dour-faced Hvitalfar gent playing a hammered dulcimer on the stage while a woman I didn't recognize sang and swayed beside him. She was a fair-skinned Wode with platinum blonde hair and a gossamer shift that was finer than bloody spider silk.

She saw me eyeballing her and shot me a wink, thrusting her hip toward me. I snorted and turned away, entirely uninterested. Once upon a time, a wink like that might've reeled me in like a fat catfish, but these days I had Amara. And Amara would've eaten that siren alive then picked her teeth with the woman's bones when she was done. Still, it was damned good to be here. Amara had pushed me to come back, and suddenly I was glad I'd let her. I hadn't been back much since killing Georgie—no, not Georgie, I reminded myself, but his Dark doppelganger—but this felt right.