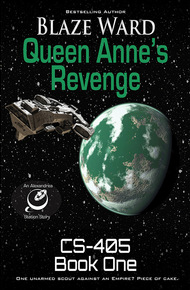 A JumpSail breakdown after the battle at First Severnaya Zemlya and strands CS-405 deep behind enemy lines. One barely-armed scout corvette must cross Buran's star empire to make it home.

But first, they need to commit a little piracy.

Part of the Alexandria Station universe and the first novel in the CS-405 trilogy, this exciting romp follows St. Legier (The Jessica Keller Chronicles volume 7) and introduces you to the warriors of Jessica's least-dangerous warship. Just don't tell them that.

Also be sure to pick up the other novels in the trilogy: Packmule and Persephone.

Command Centurion Phil Kosnett didn't figure he'd been asleep long. Just enough to get all the way to the bottom when an alert signal jolted him back awake.

It took several seconds for his brain to follow him out of the dream, time he took cataloging the volume around himself, looking for coherence. CS-405, his Corvette/Scout. Phil was in his cabin. Picture of his wife Xui Yi on the wall, with both kids latest school pics below that.

Why was there a red tinge to the lights?

His comm chirped a second time, snapping him fully awake. He reached out a hand and poked the button.

"Kosnett," he more or less growled, still a little surly from deep sleep.

"Lau," his first officer replied simply. She had the deck while he got everyone back to a normal watch rotation. "We have a problem."

Phil exploded out of his bunk, keying the lights to full and looking for his tunic. Heather Lau was one of the best officers he had ever served with, in seventeen years active duty. She never raised unnecessary alarms.

"Be there in five," Phil said aloud, stuffing his left foot into a slipper while he got an arm into his tunic. "What happened?"

"We just lost both JumpSails," she replied in a hard, angry voice. "Explosion and fire in Engineering. Rushforth is shutting systems down, but we're dead in space right now."

"How far did we make it?" Phil asked, finally getting to the door to his cabin and unlocking the door.

"Roughly forty light hours out from Severnaya Zemlya," came the reply after a moment to check her figures. Heather always double checked her figures. "We should be safe for a bit, but we're still way behind enemy lines."

Phil considered the situation for a moment, staring at his favorite picture of Xui Yi and wondering if he might never make it home to her. It was always an occupational hazard in the Republic of Aquitaine Navy. Even more so when you served with First Expeditionary Fleet, currently a thousand light years inside Buran Space.

"You keep command," Phil said. "I'll go down and help Rushforth. If Chief Battenhouse isn't awake, roust him and send him my way. Maintain red alert for now and have Siobhan take over as Tactical Officer."

Bad time to happen, but a good Command Centurion was always looking for opportunities to train his crew. Heather was going to be his peer soon, probably with the next command slot that opened up on this front. She should get comfortable with the idea.

Of course, if the fire was as bad as it could be, they might all end up in a prison camp.

Well, most of them.

Fleet Centurion Keller had reminded everyone of the standing orders for Command Centurions facing imminent capture.

If that happened, Phil Kosnett was expected to go down with his ship.