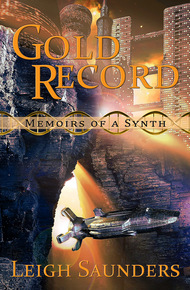 When not writing speculative fiction for a living—her day job is writing computer software manuals—Leigh Saunders enjoys writing "social science fiction," stories that focus on people—or "things" that are also people—and how magic, futuristic events, or advances in technology impact their lives. A 1993 Writers of the Future finalist, she returned to fiction in 2008 after a long hiatus, with her short fiction since appearing in a variety of anthologies and collections. To learn more about Leigh or sign up for her occasional newsletter, visit www.leighsaunders.com

Gold Record - Memoirs of a Synth by Leigh Saunders

Tour guide, emissary, diplomat, thief — and a long-lived, genetically engineered Synth — Brianna Rei travels the Hundred Worlds, hiding in plain sight. She knows her survival depends on staying one step ahead of the bounty hunters who have nearly exterminated her kind.

All that changes when she teams up with fellow-thief, Jerrold McKell, and he discovers her true identity. Now Brianna must choose between trust and survival, and what it means to be truly human.

I have never analyzed the thought processes that caused me to spend my three hundred seventeenth birthday on Earth, in the relative obscurity of a noisy, dimly lit, backstreet bar in Old Milan, and I don't intend to do so now.

For whatever reason, that's where I was – dancing on the table with a couple of newly-met, long-lost loves, in a skimpy black silk jumpsuit that showed off a lot of leg and left little else to the imagination – when I first saw Jerrold.

Actually it was the Antarean I saw first.

There weren't many aliens in the bar, and her short, bluish fur stood out in the crowd. It was Sisal. I knew her by reputation as a top fence, though I'd personally never had occasion to utilize her services.

She was sitting with two men, both human: one a roguish-looking sort with a rough-trimmed beard and long dark hair pulled back in a ponytail at the nape of his neck; and the second, a big, brawny Thug, who, from my vantage point, I could tell hadn't quite checked all his weapons at the door.

Sisal's fur was on end, her claws tapping a staccato rhythm on the small table around which the three of them sat.

That she was here, obviously negotiating a deal, I considered nothing short of serendipitous – the deal she was negotiating would be worth a lot of money, and I was between lifestyles at the time.

I was curious. I was more than a little drunk.

I wanted in on the action.

I jumped down off the table, much to the dismay of the long-losts, who called after me, begging me not to desert them. I laughed and waved them away, scooping up a couple of bottles off the bar as I made my way over to the table.

I dropped the bottles on the table between the Thug and Sisal, narrowly missing her paw, and leaned across the table to speak to the rogue, whom I would later come to know as Jerrold McKell.

"I feel very left out," I said petulantly. "You didn't even save me a chair."

I laughed. "You always have had a gift for understatement, my dear," I said, flipping my hair back over my shoulder as I stood. It was long and black and rough-cut, as was the style on Riga at that time, with its thousands of tiny ends tipped in silver. "Of course I'm drunk. That's the point of coming to a bar. Or at least, half the point."

I stepped away from the table, grabbed a chair, and pulled it up beside Jerrold, my leg brushing his as I slid into my seat.

"Look—" he began, but I didn't let him finish. I held up the palm-sized TR 90 laser pistol I had filched from the Thug. Pick-pocketing can be a useful hobby.

"You know, there was a time when no one thought they could make them this small," I said, turning the weapon over in my hand as if to examine it more thoroughly.

Sisal's ears went flat against her head as the Thug checked his now empty pocket. "I take it she is with you, Jerrold," the Antarean hissed.

Jerrold looked at me, and when our eyes met there was a moment of challenge.

I met his gaze straight-on and held it, inviting him to read what he could in my stare.

He hesitated only a moment before answering Sisal, apparently satisfied with what he had found, and in that moment I saw that we were as much alike in nature as anyone I had ever met – both decisive yet impulsive, lives balanced precariously on the edge.

"I thought you worked alone," the Thug said.

Jerrold shrugged, breaking eye contact with me. "Depends on the job."

"We won't pay you any more just because you have a partner," Sisal said, her claws resuming their incessant tapping on the table.

"And you wouldn't pay him any less, even if he did the job alone," I told her, looking away from Jerrold as I spoke, and directly at Sisal for the first time.

For an Antarean, she was small, but the muscles that rippled beneath her fur showed that she had more than compensated for her lack of stature.

Sisal pretended to ignore me, a minute flick of her left ear her only acknowledgment of my comment. "Very well," she said, breaking the strained silence. "Let's get on with this."